Summer Camp Music Festival happening at Three Sister Park in Chillicothe, IL, August 20-22. The festival is celebrating its 20th anniversary THIS WEEK! This is something you are not going to want to miss for a slew of reasons. Summer Camp has a stacked lineup of stellar musicians that cover just about every taste in music, ranging from headliners like REZZ, Tipper, GRiZ, STS9, Billy Strings, and Three 6 Mafia. As Summer Camp 2021 approaches, let’s go over everything we can look forward to.

When a festival is celebrating 20 years, everyone is going to go all out for it. And from what we have seen so far, this might be the best year yet! Early arrival for the festival begins on Thursday, August 19th with a pre-party event in the evening. This is no ordinary early arrival to a festival though. A majority of early arrival access for festivals includes setting up your campsite early and getting to check out some of the vendors before the actual festival begins. But Summer Camp has raised the bar. Pre-party attendees for Summer Camp are going to be treated to a wild night of music from artists like The Floozies, Lettuce, Manic Focus, and many more! Not to mention a late night of RV sets for those who don’t want the party to stop. 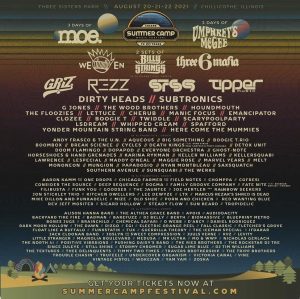 Now let’s get into the lineup for Summer Camp. No matter what your music taste is, you will be able to find something for you at this festival. If you are into the funkier side of music, artists like GRiZ, Sunsquabi, The Floozies, Manic Focus, and BoomBox will have you covered. If hard deep bass is more of your style then be sure to see REZZ, G Jones, LSDREAM, and MIZE. But if your music taste is even harder, you won’t want to miss Subtronics, Whipped Cream, Boogie T, and Boogie T.rio. When you are ready to take it easy and see some chill sets, you’ll be able to catch STS9, Papadosio, Moe, and Umphrey’s McGee. But when the sun goes down and you are ready to get trippy and wild, Tipper, Detox Unit, CloZee, and Maddy O’Neal will be throwing down some unforgettable sets!

More To Do Around Summer Camp

Like many other music festivals, there is much more to be seen and done other than the music going on. Summer Camp will have live art galleries where you can see artists doing live paintings throughout the weekend. You can take workshops on things like urban gardening, crafting, and more! Summer Camp also hosts many vendors, many of which are sponsors of the festival. When you are at Summer Camp you will be able to stumble upon Founders Brewing, Eno Hammocks, Grassroots, Deep Eddy, Redbull, Good Intentions, Spunglasses, and so many more!

If you haven’t figured it out by now, Summer Camp Music Festival is not one to be missed. People are going to be talking about this festival until they have their 30th anniversary. The lineup: Unmatched. The Vendors: Incredible. The Art: Out of this world. So much to come in so little time. We will have a couple of team members roaming around Summer Camp this year and who knows, you may run into one of us and find a new friend. We are super excited and look forward to seeing you all at Summer Camp 2021!

Still don’t have tickets? Secure them on the Summer Camp Website before it is too late!

Disclosure Have Dropped Their Third New Single Of The Week: "Seduction"