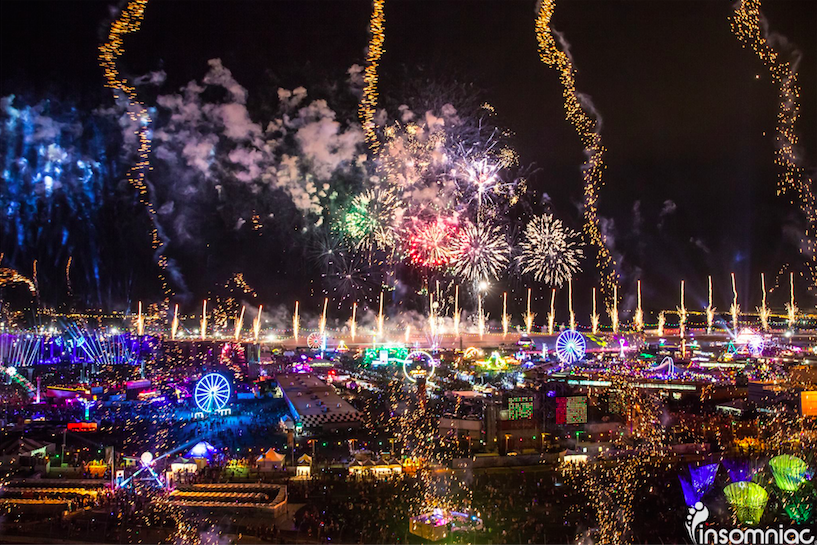 Insomniac Events continues to pull out all of the stops for Electric Daisy Carnival Las Vegas. The 3 day festival begins June 19th at the Las Vegas Motor Speedway. As an EDC Veteran, I can safely say this year will be like no other. WHY? Well because Insomniac has announced 10 new additions to EDC. Trust me, their latest news is beyond exciting.

All 8 stages will be redesigned. These designs have never been seen before at EDC. As in years past, owls will still be a staple of Kinetic Field. Insomniac will be transforming Kinetic Field (main stage) into the Crystal Village. In between each DJ set, the Mayor of the Owl community will appear and preside over the biggest celebration in North America. GET THIS… He will release crystals into the audience. Each will contain the power of earth, fire, water and air. This merger of nature and technology has been a longstanding goal of EDC that was first established with the creation of the daisy symbol.

Stages will have state of the art lighting and pyrotechnics as well. I’m super excited to see EDC’s newest stage, The Funk House. The 360-degree stage is built out of reclaimed and recycled materials! It’s totally environmentally friendly! The music on this stage will feature funk, disco, soul, classic hip-hop and future funk. You will definitely want to check this stage out and get your groove on!

This year, Insomniac has created, Carnival Square. This area is the perfect for your groups meeting spot. It is located right in the middle of the festival grounds and features seating, food, drinks, merchandise booths, general store, meet and greets, lineup information, lost and found, a video confessional booth and much more. YES, a video confessional booth. I can only imagine the sins that will be confessed! For EDC Vets, this area is in the middle of the grounds between Cosmic Meadow and Kinetic Field.

If you want to party like a rock star, you’ll want to get a spot on the Marquee SkyDeck. This is EDC’s cabana space that features an open-air nightclub experience complete with full bars and upscale furnishings. There will be table service as well for those of you looking to ball out!

Do you want a cabana decked out like an African Safari? Well, Insomniac can make that happen. If you rent a cabana at Marquee SkyDeck, you can have it tricked out to your own liking! You’ll pick a theme and Insomniac will execute your idea! This is pretty awesome, especially if you are having a birthday at EDC!

A number of new art installations will be at EDC this year. You’ll want to check out the massive bamboo creation by artist Gerard Minakawa. He will be making a massive structure inspired by the Hagia Sophia Cathedral in Istanbul, Turkey. This will require about 20 tons of materials including 500 bamboo poles. This will also be a great spot to chill at with your friends!

This year, Insomniac is bringing some of the best food trucks in the nation to EDC. So if you only eat organic foods – you’re in luck as there are more healthy eating options this year than ever before. New food trucks at EDC include: Cousins Main Lobster, 50 Shades of Green (organic), Senor Blues (Tex-Mex), Baby’s Badass Burgers, Oming’s Kitchen (Vietnamese), Bowl of Heaven (yogurt parfait), Urban Pie (wood oven pizza).

Want to have a true gourmet food experience at EDC? Look no further than The Terrace at Kinetic Field. This is EDC’s upscale dining experience at main stage. Chef Kevin Alan Lee has some tasty treats for your taste buds that you will only find at EDC. Dishes include the Spicy Tuna Electro Roll, Hypnotic Chicken Tacos and an out of this world S’mores dessert! This 3-course seated dinner is $140 per person. A 3-day VIP Café meal costs $88. You will need to make reservations ahead of time.

Headliners will have more places to relax and unwind during EDC. So if you feel like taking a break from all that bass, you’ll encounter a lot more chill spots located throughout the festival. The relaxing environments include benches under LED trees! I’m sure these spots will be a prime place for a massive cuddle puddle!

Insomniac has some new graphics and designs for their merchandise that will be for sale at EDC. Merchandise booths have been set up all over the festival grounds so it will be easier to purchase that new EDC Snapback! If you forget to purchase something at EDC, don’t worry. Hotels including the Wynn and Encore will be selling EDC gear during EDC week!

VIP’s have it made this year. From separate entry lines, free drinks and appetizers, a massive ball pit to a new VIP viewing deck at Cosmic Meadow. This will be a prime spot where VIP’s can take in the sights and sounds of Cosmic Meadow. This is the first time Cosmic Meadow has had a VIP platform. I just wish I had bought a VIP pass this year so I could experience all of these perks!

So there you have it. Your inside sneak peak at the 10 new additions to EDC Las Vegas 2015. There are a number of surprises still in store for you…. But you’ll just have to wait a little longer!

Be sure to check out http://electricdaisycarnival.com for more information! Oh, only a few VIP passes are still available.

See you in Sin City!