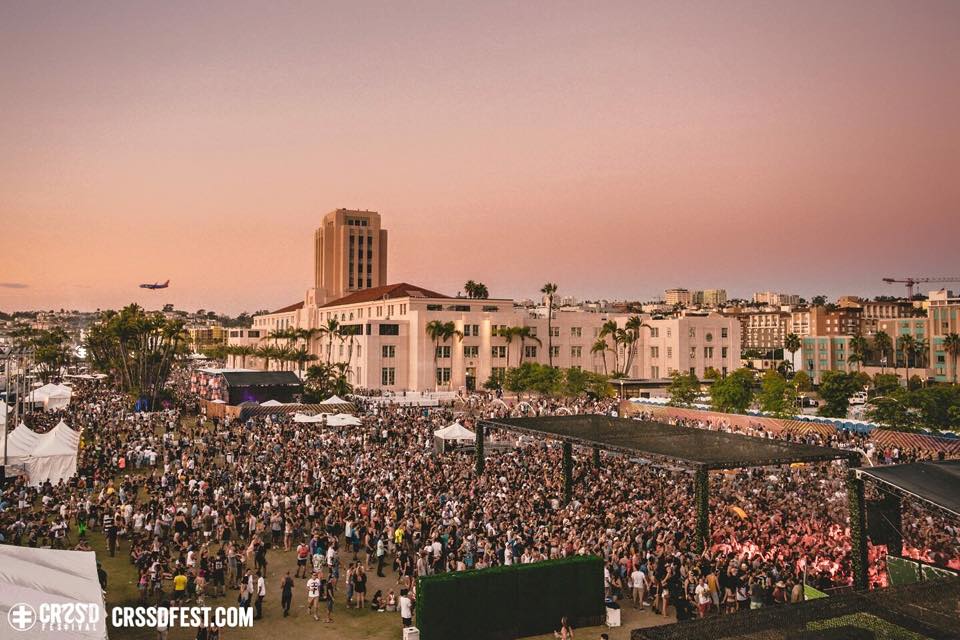 Unless you’re saving yourself for EDC Vegas, nobody’s first festival of the year is that far away. Soon everyone will be counting coins and cutting up old clothes to make new clothes that will go with the event wristband that you put on every other weekend. For some the first fest may be something big like Ultra or Coachella. For others it may be something smaller like Beyond Wonderland. Well we here at EDM Maniac are going even smaller than that. Our first fest of the season will be the third installment of San Diego’s new underground dance hub, CRSSD Festival. We couldn’t be more excited for this one, and here are a few reasons why:

Often heard in relation to real estate values, that phrase consisting of the same word thrice precisely describes one of CRSSD Fest’s greatest assets. Returning to San Diego’s Waterfront Park which is adjacent to the pacific ocean, the festival lands on March 5th and 6th, which is a likely candidate for the first warm weekend of 2016. There’s always some official date that signifies the “first day of Spring”, but here in SoCal, Spring comes whenever it gets a little warmer than winter, and that pretty much always happens in March. Unfortunately the venue doesn’t offer ocean access, but the are a series of fountains in which to cool off if you’re not being blessed by the ocean breeze. Pair that with some sweet tunes and bars everywhere, and I can’t think of a better place to start Spring.

Yes, festivals are for everyone to enjoy, and yes, it’s possible for people under the age of 21 to be kind, respectful individuals, but slapping a 21-and-up age limit on a festival does a lot more than keep out a bunch light-weight teens. First and foremost is the lack of beer gardens. Granted, the venue is small to the point that a properly sized beer garden would be incredibly intrusive to the flow of traffic, but regardless, who doesn’t like to be able to mob from stage to stage with a beer in hand? Nobody that’s who. Plus, with the lack of the aforementioned light-weight teens, the chances that beer will be knocked out of your hand by some idiot are significantly reduced.

This might be a little redundant, but the fact that CRSSD takes place in San Diego is worth mentioning twice. Up until CRSSD, the only real large-scale events in SD were LED events, all of which were super raves that brought the biggest house and trap artists possible. There was no real place for fans of the underground to go other nightclubs. CRSSD is what changed that. Not only did it provide an alternative to LED musically, but through the coastal setting and the age restriction, it provided a festival where adults could enjoy themselves. Clearly, San Diego is grateful considering the amount of success they’ve achieved.

4. Preparty before. Afterparty after.

One of the only bummers about CRSSD’s beachside location is the early end-time. Like many outdoor festivals in the city, the last beat will be heard at 11PM. However, instead of forcing it’s thousands of attendees back to their hotel rooms for an afterparty, CRSSD takes advantage of San Diego’s Gaslamp district. Being less than a mile away a from the venue, every CRSSD attendee is just a 15 minute walk from a multitude of clubs, almost all of which will be offering an CRSSD afterparty featuring one or several of the artists at the festival. Last year Pete Tong even curated a boat party. This gives people a chance to keep the party going all night as well as letting them see artists they may have missed during the day. And because Fingers CRSSD (the promoter behind the festival) has a presence in LA as well, there will be several club nights featuring CRSSD artists including Loco Dice, Skream, and Damian Lazarus leading up to and following the festival. I know the poster says its two days, but CRSSD can last five if you want it to. Official SD afterparties are coming soon, but tickets for the surrounding events (branded “the path to crssd”) are on sale now.

This is a big one because let’s face it, with so many festivals out there, it’s really hard to stand out at this point. Don’t get me wrong, all the other aspects like the venue and the rest of that stuff are killer, but there’s nothing about them that’s really unique. They kick ass in San Diego because there was an empty market worth filling, but they don’t put CRSSD on the map. Well, the lineup this time around more than takes care of that; specifically the two stages that aren’t MainStage. Not only are they filled to the brim with house and techno legends, but CRSSD has found exciting ways to highlight these artists.

The stage called “The City Steps” is where you’ll find some of the deepest darkest techno around. With artists like Loco Dice, Tale of Us, and Cirez D topping the list, CRSSD has made sure they will be able to fully envelop their audience in sound by guaranteeing two-hour sets. Being the minimum length for a headlining club slot, two hours is a more proper amount of time for them to take you on a journey. Anything is much too short. Singular techno tracks usually last between six and ten minutes, which means that with an hour set, an artist my not even be able to fit seven tracks. Obviously most artists don’t play tracks out in their entirety, but some do. Plus, transitions are just as important in techno sets as the drops. All of the DJs at the City Steps understand that, and with two hours they’ll be able to show it.

Then we have “The Palms” stage. Here you’ll find all manners of tech house, deep house, and frankly anything else these utterly versatile DJs want to drop. This stage will host huge names like Jamie Jones, Lane 8, and Claude VonStroke along with a whole slew of Dirtybirds. By looking at the poster, it’s clear that they won’t be able to offer all of the artists playing there two-hour long sets, but there might be more time than you think because CRSSD has announced that a select few artists at this stage will be going back-to-back. Unfortunately they haven’t revealed the pairs just yet, but that allows the suspense to build even more. Other than likely candidates like Claude and Green Velvet doing a Get Real set, there are dozens of combinations that would be truly unforgettable. Maybe Skream back-to-back Tiga? Or even Jamie Jones back-to-back Lee Foss? There’s no way of knowing who it’ll be, but like the rest of the weekend, it’s going to be awesome.