With just two weeks away from Factory 93 and Day Trip’s Skyline Festival, Insomniac for the second time, is bringing the heat to Orlando, Florida. With an exceptionally diverse line-up of heavy-hitting house and underground techno, music lovers from all over will be coming to dance at the 2-day, 3-stage festival, that features over 30 genre-pushing artists.

While featuring widely known names like Green Velvet, Will Clarke, Chris Lake, and ZHU, it is quite impressive the refreshing reach Skyline has within the house and techno community. Prepare for a multitude of artists who hit the scene with their own way of defying the genres and bringing people to the dance floor. Check out a few of the artists worth should checking out May 27-28 at Skyline Orlando.

The highly praised, London-based, female force to be reckoned with, TSHA,  has created her own definition of fun. Adding disco and pop elements to up-beat house, TSHA, real name Teisha Matthews, brings a dance party with her anywhere she goes.

While in an interview with Notion, Matthews elaborates on her sound with, “I’m more drawn to the electronic sound so I’m not really sure how my music ended up with so many pop elements to it. I like some pop music and sounds, but I’m very much more into emotive electronic music. I love psychedelic music, Pink Floyd, and stuﬀ like that. I love hip-hop and Kayne West. So I do love a good pop song but I’m not someone that is listening to a lot of it. I’m not really sure how it ended up in my music… I guess it’s a subconscious thing. I do try to write to appeal to as many people as possible so perhaps it’s come out of that.”

As a Florida native slugg emerged on the scene with his fresh twist on minimal by mixing it with a heavy hip-hop influence. By sampling hip-hop tracks over repetitive percussion and flatted bass, slugg, real name Matteo Acosta, has created his own way of combining two genres flawlessly. While staying busy releasing songs on multiple different popular house labels like House Keepers Records and Rawsome Recordings, Acosta has also curated his record Label and event series, GetBusy.

As a live Electronic Performance, WhoMadeWho, consist of three ultra-talented individuals that have taken experimental sound into their own hands. Since releasing The self-titled album in 2005, Copenhagen’s own Jeppe Kjellberg, guitarist, Tomas Barfod, Drummer, and Tomas Høffding, Vocalist/Bassist, have released a massive collection of live and recorded music.

Jeppe once said in an interview with 15 Questions Magazine that, “when composing vocals, I, personally, love diving into the subconscious.” Not afraid to step out of the box, as their music takes listeners on a journey to the depths of the human psyche.

The Italian-based techno queen has been working hard to create her own movement for years now. Letyago calls Naples, Italy home, and her passion and drive took her from being a local DJ in southern Italy to traveling the country alongside the biggest techno names in the world.

Sticking to her Italian roots Letyago brings dark and complex energy to the dance floor that even Carl Cox can’t get enough of. Anfisa expresses her love for Cox in a recent interview with Billboard by saying “Meeting Carl Cox for the first time is undoubtedly one of the biggest moments of my career,” Letyago says. “He’s been a great friend and colleague ever since, supporting me and my music so much that he has played my tracks on the biggest stages of the world. He gave me credibility, and a lot of opportunities started coming.”

Originally from Cleveland, Ohio but now based out of Los Angeles, California, Honeyluv has truly taken a grasp on the dance music scene. Once spinning hip-hop but later transitioning into dance house, she has always loved to bring the energy that would get anyone dancing.

All over the world HoneyLuv, real name, Taylor Character, has packed out dance floors by throwing catchy hooks and keeping the bassline heavy. She puts both an east and west coast touch on house music with her funk-infused soulful energy that takes over bodies and forces uncontrollable movement.

These are just some of the powerful artists that will be playing at the second Skyline Orlando, May 27-28. Check out the full lineup below and click here to purchase tickets. 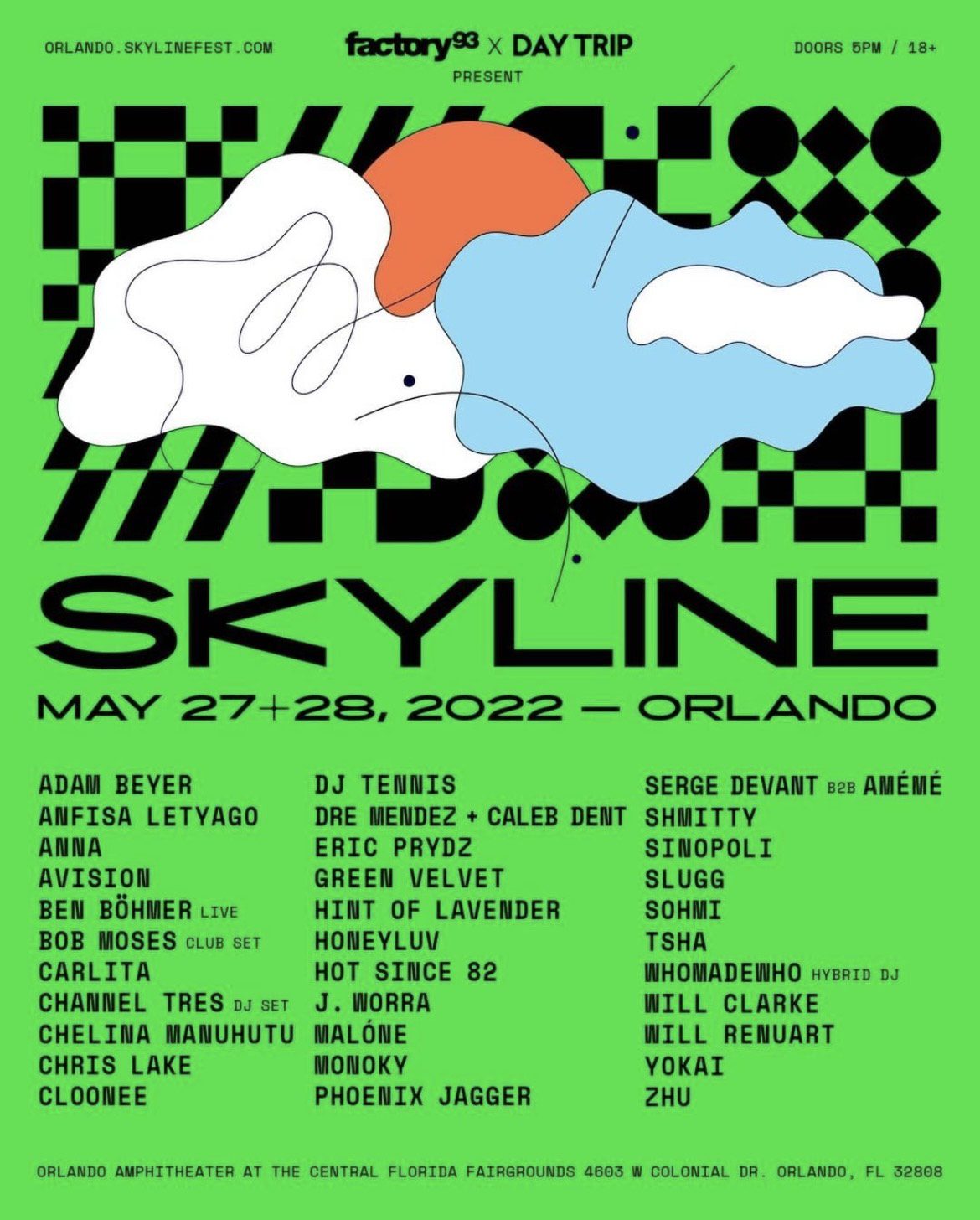 Yonderville Taps Liquid Stranger, Of The Trees, And More For Biggest Edition Yet