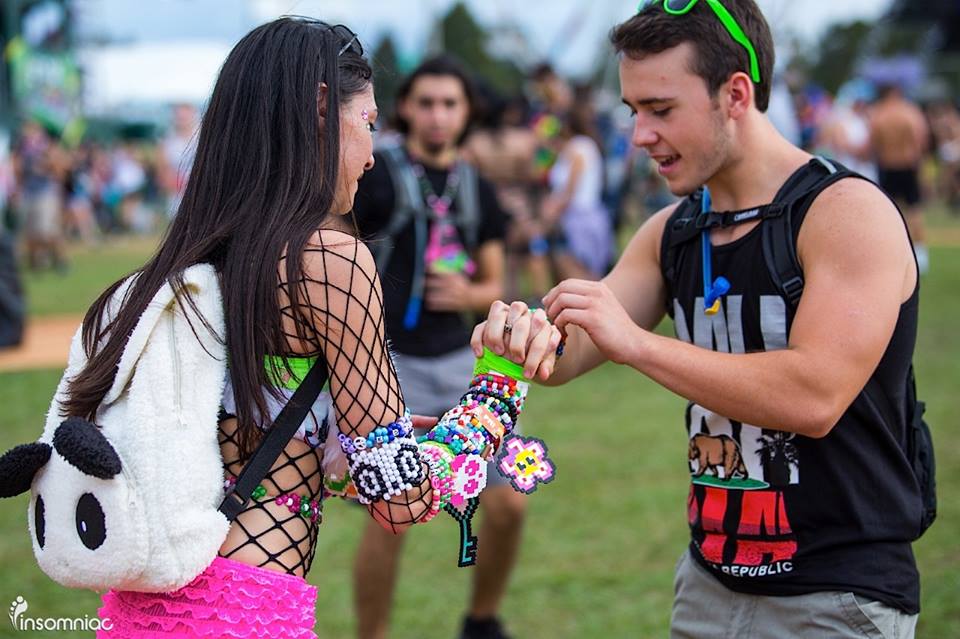 9 Signs That You Might Be A New Generation Raver

Greasers. Punks. Jocks. We may not be at Rydell High with Zucco and Sandra D, but cliques are still a very real part of our society. Even without the stereotypical switchblade-comb or letter-jacket, these groups all have tell-tale signs that can be spotted from a mile away with the proper eye.

Ravers are their own clique now, and just like greasers, punks, and jocks, there are certain commonalities among today’s ravers that can’t be missed.

There isn’t another article of clothing that screams the word “raver” quite like kandi. Whether it be on a wrist, around a neck, or dangling from a rear-view mirror, if there are beads, thread, and a few letters involved, you can bet that person has their hotel room booked for EDC Vegas already. However, there are some people who don’t want their raver-ness to be that obvious. If that’s the case then their support may come in the form of a key chain or a sticker on a laptop, but either way, the message is clear.

Although many people have reservations about how involved we are in technology, Facebook does come through clutch when meeting new people. Even if you’re phones dead when you meet someone, you just need to remember the person’s name, and hope they aren’t one of the few with some random anime character as their profile picture. Well, as soon as that friend request gets accepted, it becomes immediately clear whether that person is a raver or not. Ravers are a proud people. If they had a great time at Ultra, you can be damn sure there will be a few (if not a hundred) pictures of them with their feet in the sand of South Beach. Instagram is even quicker. Assuming their username isn’t something like “@plurliferaveprincess”, the number of rave pics will vastly outnumber the rest.

The saying goes, “the only people who wear sunglasses at night are blind and assholes”. Well some ravers may be blind, and a select few of them may be assholes, but most of the time, the lights are just really bright. Why put up with it if you have sunglasses?

Genres simply known as “house” or “trance” doesn’t exist anymore. Tech house. Deep house. Psy Trance. Uplifting Trance. If you’re gonna join the conversation you should at least try to know the difference, because dubstep and brostep definitely aren’t the same thing. If you try saying otherwise, you’ll embarrass yourself. Oh and don’t you dare try to refer to all electronic music as “techno.” Real ravers won’t stand for such tomfoolery.

5. “What are you doing with your hands?”
“They’re called lightshows.”

Everyone has their own little fidgets and quirks. Some people tap their feet. Some people chew on their pencil erasers. Well, if you see the kid sitting next to you in class moving his hands around like a wannabe octopus, you can bet that in his mind, little LEDs are flashing away on his fingertips and the EDM is blaring through imaginary speakers.

You might not realize, but everything applies to raves, and I mean everything. When ravers buy shoes, pre-festival season, they need to make sure they’re sturdy or else they’ll be buying a new pair within a month. If you ask a raver to go out for some beers, they’ll often say no because EDC is coming up, and they need to save. When you pass any kind of warehouse, church, or vacant lot, the first thing that comes into a ravers head is how cool it would be to get some speakers and fill that place up with people and loud music. You can literally relate everything to an experience at a rave. Watching TV? Reminds me of that time we were coming down after the rave and watched “It’s Always Sunny In Philadelphia” for seven hours straight. Eating In ’n Out? Well it definitely wasn’t as good as the post-rave In ’n Out you had last weekend.

Unfortunately for the true lovers of electronic dance music, clubs are more about socializing than they are about the DJs. That’s why people still have a good time even if there’s no room to dance, and they’ll pay the ridiculous prices for tables and bottles regardless of who’s spinning. However, real ravers need room to dance, and when they dance they dance good. Ravers don’t just listen to electronic music, they feel it, every beat. Their dance moves are consciously devised, they are organically expressed. It’s such an infectious feeling that even if someone is in a restricted environment like a car, some part of their body will immediately become involved in the music.

With the ever growing popularity of texting and emails, more and more words and phrases are being shortened. Artists are now simply removing vowels from unattractive words like “sunburn” and “subtract” to use as their names. Well in the rave community, abbreviations are like a whole new language. Almost every letter of the alphabet can be used to refer to something rave-like if not by itself then combined with other letters. EDM, PLUR, these aren’t just easier ways to say combinations of words, they are significant cultural symbols to ravers. Plus there are all the other ones that just make our lives a whole lot easier: ASOT, ABGT, EDC, DCR, CDJ, EDM the list is literally nvrendng (see what I did there)?

Another fancy word for personality, but anyone who is a true raver has an awesome personality. If you’re definition of raver is “anyone who regularly attends raves”, then are definitely the black sheep out there worsening the experience of those around them, but they aren’t true ravers. True ravers embody the spirt of the scene and take it with them wherever they go. Granted there are a lot of people on Earth with awesome personalities and most of them probably haven’t been to a rave, but anyone with an awesome personality would have the best time at a rave. Perhaps the next time someone brightens your day, flash them your EDC keychain and see what happens, you may have just found a new member of your rave family.