More newness from the likes of everybody’s favorite EDM icon, Deadmau5, as the DJ/producer has been leaking more and more nods towards his recent work. He ended January, not only with his snowstorm performance during the 2016 Winter X Games in Aspen, but by also releasing 2 preview tracks on Soundcloud that are associated with his highly-anticipated Project Entropy stage show. But the year is clearly only getting started for Mr. Joel Zimmerman, as he’s continued his spree of musical generosity this month. Yesterday, fans got to hear “Carp,” an exclusive upload that offers a dose of the Deadmau5 many of his fans enjoy so much. Tagged as #carpstep, the track has a soft, melodic intro with a drop at :35 seconds that quickly reminds you who the mastermind maestro is. Today, Joel gave us another, almost-identical take on “Carp” titled “What a save!” The Soundcloud submission today seems to be a longer version of “Carp” with a slightly different drop, this time labeled #RocketStep. Check out both “Carp” and “What a save!” below:

In addition to new sounds, the Mau5 himself let us in on some new sights in the near future. According to him, he’ll be “doing a mau5hax tour in a few weeks” from Toronto to Miami with “lots of stops in between.” As far as the rest of the details for this spontaneous mau5hax tour, they’re expected next week. Scroll down to see the way he announced the tour during his Twitch TV gaming session, and be sure to keep up with Deadmau5 for news on tour dates, new music and more! 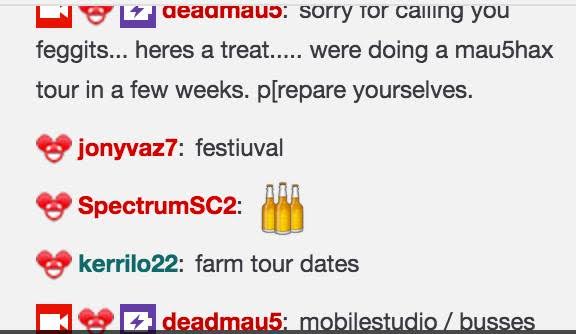 Source and photos: Your EDM

9 Signs That You Might Be A New Generation Raver