Asterians Are Still Buzzing From Florida’s Premier Boutique Festival, And Here’s Why

There are multiple definitions for the word Asteria. “A gemstone cut to show asterism”, “the Greek goddess of nocturnal oracles and falling stars”, and “the feeling of elation after a taste or a touch”, yet somehow this intimate music festival succeeded in incorporating all three definitions seamlessly. In a setting that displayed the stars so beautifully, Asteria surely created a world, if only for a weekend, where nocturnal oracles in the form of music were delivered to all that made the journey into the wilderness.

The journey to the festival was rural and inviting, and Asterians made their way towards Lake 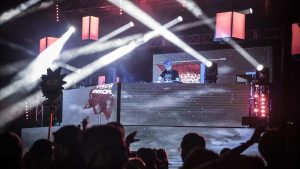 Pierce in droves to set up camp, grey clouds looming in the background but an overall sense of resilience, as they knew nothing could stop their party. Tents started arising, and a festive buzz could be heard throughout camp, as anticipation for Virtual Riot, Barely Alive, Modestep, Dodge & Fuski, and Bandlez grew. This was the calm before the storm. Dubstep was already pumping in the background at the Oracle and Akkorokamui stages as attendees got ready for the opening night. 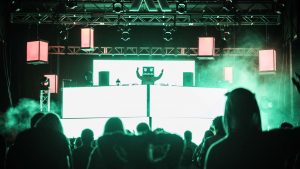 Raindrops began to fall, and steadily increased, forcing Asterians to take refuge in their tents to wait out the storm. To their excitement, the festival curator smoothly and efficiently moved the party inside, and so it continued. When the showers stopped, an overhead view of the grounds would have showed Asterians peppering back to the stages, taking their places at the rail, and preparing themselves for glorious destruction in the name of Disciple.

The party ensued when Dodge & Fuski took the stage at 9pm, followed by Modestep, Barely Alive, and Virtual Riot, with Bandlez coming through for the after party. The general consensus at camp was that Virtual Riot damn sure brought the riot, and opening night continued into the morning, to the delight of many headbangers, at the two afterhours stages.

The lily pads on Lake Pierce rippled as Asterians arose for round two. It was a new day, and you could see curious heads poking out of tents and making their way across the grounds which were decorated with mystical creatures and fixtures. The delicious scent of fresh cooked food wafted from the food vendor area, and magnificent gifts and artwork were being sold left and right. It didn’t take long for the music to emanate throughout the site, and creative outfits could be seen far and wide. Workshops in the lodge were insightful and captivating. Forrest Bump was nothing but a blur as he ran from stage to stage giving everyone fist bumps as the wind carried the tunes across the lake and into the abyss.

Tonight, techno lovers could rejoice at the thought of experts taking the stage to represent mau5trap. The sun went down reluctantly, knowing the darkness would bring nothing but sin, something Asterians reveled in quite frequently, as the music they have chosen to reverberate their spines tonight would be so good that it’s almost evil.

Holographic jackets from the merchandise booth caught light from the main stage and erupted in silver as i_o took the stage. Immediately, an entirely different feeling was thrust upon the crowd than what they’d experienced day one. The sounds being pumped from the subwoofers were nothing short of godly. This underground savagery was continued by No Mana who detonated the speakers, and Feed Me brought tears of elation to the crowd as he brought back old school dubstep and complextro noises, blasting us into nostalgia and tearing us back out with some new, expertly crafted beats as well.

Time raced by through these epic sets, but lucky for us, the music would remain. The House Hangar emitted the bounce as the Orlando crew D-Day, MASF, Too Heavy Crew, and Phoenix Jagger demonstrated the way house music should be done. They ushered us into the morning with the funk as we scampered back to our tents, absolutely fulfilled and pouring over with gratefulness.

We now await Asteria year 4, with dates already announced for April 17th, 18th, and 19th of 2020, never forgetting the magic that brought us there in the first place.

Avicii Biography To Be Released In 2020