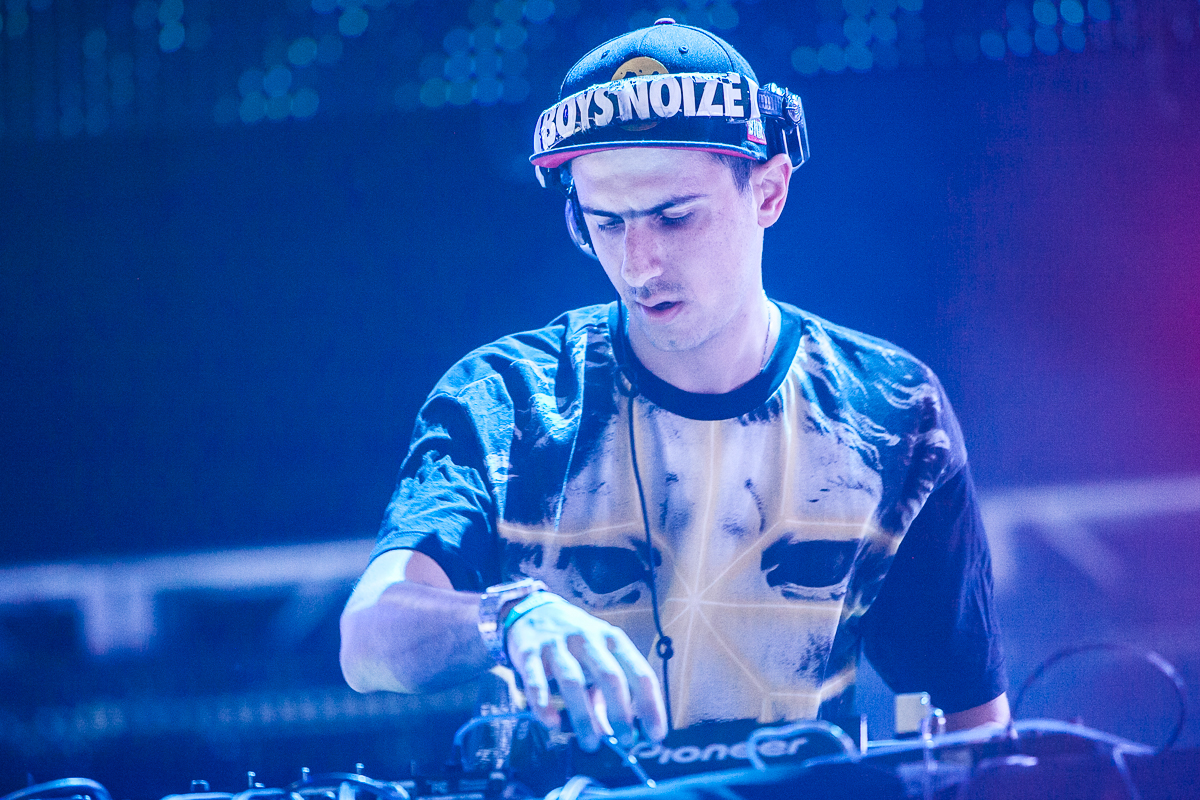 It was set to be a boring Friday night until I received a text that said “Lets go see Boys Noize at a warehouse tonight!” I knew I was immediately in but I wasn’t exactly sure what I was getting myself into.

After waiting a couple of hours for the location I received an email with directions to the location of a dude who had the address. It read, “Help us keep the fuzz off of our backs. Look for the guy in the white van with the balloon and he should be able to help.”

With nothing to do but find the guy in the white van, some friends and I truly began what I’ll call our mayday adventure. We show up to a suspicious alley like street that has light in only patches and smells like rotten tomatoes with a hint of regret. There was but one van on the street and as we slowly pull up to the side lo and behold there’s a huge balloon resting in the passenger seat with a guy ready to direct you the right way. I cautiously approached the van and before I even had the chance to say anything he banters an address. Come to find it was about 2 miles away from our exact location with a secret entrance through a side street.

As we pull up we aren’t even sure if we are at the right place. It looks like a horror scene with factories scattered through out drowning in the grimy vibes of Downtown LA after hours. Once we spotted the line of people who look like they’re dressed for an anti-rave and can hear a pulsing kick drum caress the walls of one of the many warehouses we knew it was time.

Within the blink of an eye we are in front of beasty bouncers whose locks resembled Medusa’s signature aesthetic. Deceiving to the look, they are simply there to show this is not the place to fuck around, quickly escorting us in without a search.

It wasn’t the Wiz Khalifa black and yellow rather a mix of blue and red in abundance. The intimate setting consumed everyone with darkness and as you entered the warehouse to get your groove on you were a tough one to catch. Of course, it was so small you could easily find even that dream you never wanted to end. 12am came and the mysterious four on the floor beat set the mood for the night as morose melodies moved by percussive elements and dark room vibes were in full effect.

This was not your typical party. It lacked any kind of pretension and had no VIP areas. There was no backstage, no nothing and made for an all inclusive experience that boasted authentic warehouse rave vibes.

Boys Noize set to dominate the decks for the pre-celebration release of his latest album Mayday and the starry eyed crowd stood waiting in awe. If you really wanted to you could easily reach over and grab Alex from right behind the decks but why would you wanna do that you creep.

The first sign of music flies from those speakers and with no barrier to hold anyone back the crowd shoots all the way to front filling every single inch of that warehouse. Boys Noize opened with the first track off of Mayday that goes by Overthrow and after the two and a half minute build up it sends everyone into of the most hyped musical fury’s I’ve ever had the chance to experience.

Excuse my language but banger after banger his eyes were set to kill and he had no plans of stopping any time soon. You could see the determination dripping from Alex’s face as he strolled through his magical music library and everyone followed. Ultimately, it was Boys Noize in his natural state.

3am comes and some friends and I went for a round of drinks. We stood there and pondered on the fact that it was 3am and we were buying drinks. After a brief moment of disbelief, we grabbed our Moscow mules and headed straight back into the party. His entourage of men dressed in ski masks walked by us and shared a smile. As ass backwards as everything seemed, it just felt so right. The grime, the vibes, the experience, the music, the drinks, the people, everything just felt so right.

The party relentlessly continued and next thing we know its nearly 5am. It was no longer pitch black outside. The sun was insidious in its operation and we knew it was time to go.

It wasn’t easy saying goodbye to such an experience that felt so raw at it’s core. In a scene where everything is motivated by money, trends, and false realities it was extremely refreshing stepping into a night that was exactly the opposite of that.

Walking away as the beats are pounding those warehouse walls, we knew this was a night to remember for the rest of our lives.

Shoutout to Boyz Noize for always keeping it real and straying from the path with authenticity and always staying true to his sound.