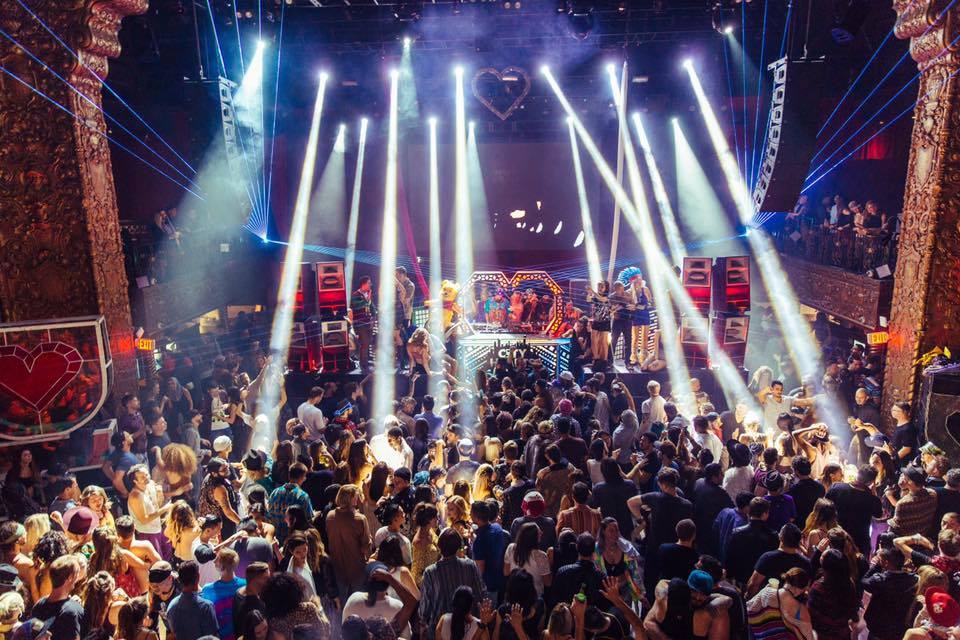 After the massive success that was their three-year anniversary festival, the Desert Hearts crew kicked off their City Hearts tour in LA last Saturday at the Belasco theater.

Cleverly titled the “Winter Is Coming” tour, DH curators and DJs Mikey Lion, Porkchop, Deep Jesus, Marbs, and Lee Reynolds sought to take all the good things about the festival to venues around the country, and in that effort, they succeeded.

The Belasco, like many Los Angeles venues, was first built over 90 years ago. Originally opening its doors in 1926, the theater has served many purposes and been owned by many different organizations during that time. It started out as a burlesque theater, then was sold to become a church, then was sold again to be rented out for multiple uses. After a $12 million dollar restoration in 2011, it became the popular downtown music venue it is today.

However, on December 5th, 2015, the Belasco was none of those things. With the help of some talented performers and humble vendors, the DH crew transformed the classic theater into a hub for the creative, the friendly, and the genuine.

I had been to the Belasco for a rap show in the past, and other than the main theater, the balcony (which was almost completely roped off for “V.I.P.’s), and the outdoor patio on the first floor, the doors were closed. The purpose of being there was to watch whoever was performing on the main stage.

At City Hearts, every inch of the venue was traversable, and every room had something unique to offer.

Let’s start the tour with the main theater. After passing the DH merch booth, your eyes and ears are immediately filled with art and music. Other than a bar positioned at the rear of the dance floor, the room is circumvented by a series of artists painting all manner of different images. All of them had art for sale and would gladly exchange a few words with you if you expressed an interest in their work. One of the painters named Matt Milano, whose work all featured a similar series of markings, told me that those markings were a language he invented.

“It’s called the language of light,” he said. “It basically represents that we are all living together on this planet and we all communicate through the same energy.”

At the front of the main theater, the Desert Hearts crew are bumping their signature beats underneath an LED heart with a whole mess of fans dancing around them. Instead of roping off the stage to attendees, you were free to walk right up to them while they were spinning, and if the two speaker stacks weren’t being used as platforms for a series of flow artists, then you were free to dance up their as well.

Outside on the first floor patio were vendors selling all types of clothing and jewelry, and if you went up a flight of stairs from there, you’d find a small deck where the flow artists inside would take their toys and light them on fire. Then came another flight of stairs that would lead you to the indoor balcony where the truly impressive lighting rig, complete with lasers and strobes, really took ahold.

The best part of City Hearts though, was despite how spread out everything was, there was an undeniable level of intimacy throughout the whole night.

Upon reading interviews with Desert Hearts crew in the LA Times, Beatport news, and many other places, the word “intimate” is always present. Despite hearing from a few friends that this edition of City Hearts was more packed than the previous one, everyone in attendance was not there simply to get drunk and dance to some house music, they were there to experience a vibe. A vibe that Desert Hearts has worked for years to curate.

At a Desert Hearts event, people aren’t afraid to be themselves. Other than being clad in attire that’s usually reserved for Halloween parties or outdoor festivals, everyone was excited to hear about you and tell you about them. Hugs were more common than handshakes, deep conversations flowed effortlessly, and every once in awhile you would turn around and find yourself sitting next to Mikey Lion on the balcony, complete with his eponymous top hat and a huge smile across his face. Some artists present a closed off persona to not be overrun by their fans, but Mikey and the rest of the crew don’t see them as fans, they’re all family. A family to which they have no trouble opening their hearts.