15 Funny Reactions To The Coachella Lineup

If you haven’t heard, the Coachella lineup was released this morning. Tickets for the two-weekend music & arts festival go on sale tomorrow at 12pm at www.coachella.com. While many music fans are anxiously waiting to buy their tickets, there are a few people who just weren’t happy with the lineup. Down below are 15 real (and funny) reactions from people who just weren’t feelin’ it this year.

You be the judge: we’ve attached the full lineup for you down below in case you haven’t seen it. If you decide to check out Coachella this year (we highly recommend you do), we hope to bump into you in the beer garden dancing the night away!

15 Funny Reactions To The Coachella Lineup

PLEASE tell me North Korea is hacking Goldenvoice. This has to be a joke

Why in the fuck is acdc headlining? Fucking pukeeeee.

a few good things thrown in there but then you look at the rest….what a boner kill

Wow Coachella this lineup blows. You are catering to 20 year olds with no taste in music at all.

the worst lineup ive ever seen in my life, kill me now

Well this ruined my day.

I seriously want my money back

Didn’t think I’d live long enough to see the day when some loser like Drake would headline Coachella. Turns out I was sadly wrong.

You guys freak out bc of Drake. I’m sitting here and can’t believe that someone thought it’s a great idea to invite DAVID GUETTA.

Drake is that boy who acted with Josh in a old nickelodeon tv show?

I’m thinking Coachella Facebook just got Hacked by N.Korea. If not, watch out cause Craigslist website is about to crash!!

WHOEVER MADE THIS LINEUP SHOULD BE FIRED. IMMEDIATELY. 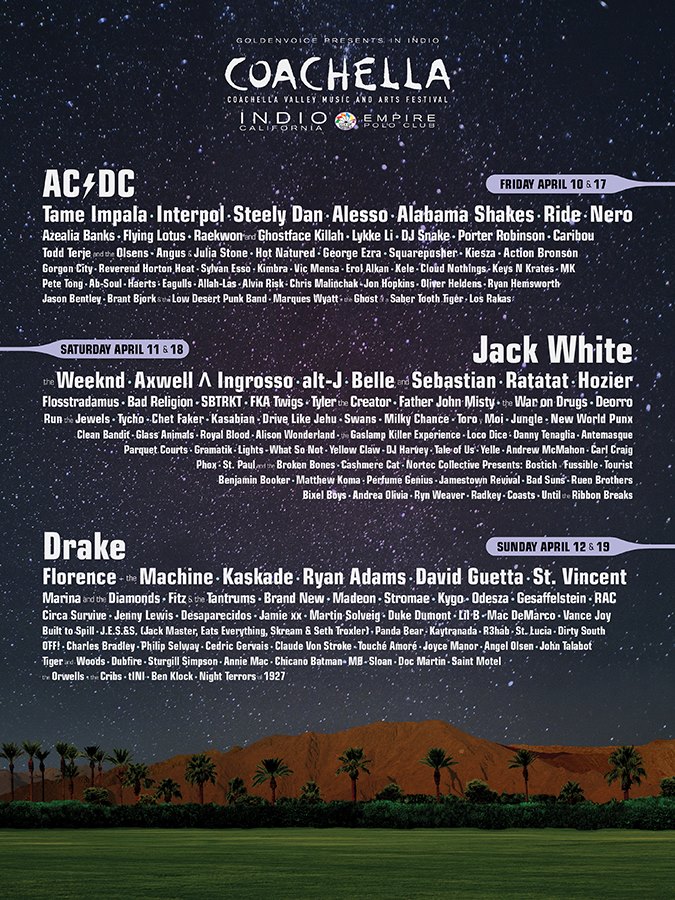 The Return of Insomniac's White Wonderland: Still Room to Grow