Get ready to rage with Disciple Round Table’s Knights of the Round Table Vol.5. The explosive compilation contains 32 rumbling dubstep tracks from some of the biggest names in riddim, as well as many up-and-coming underground producers.

Barely Alive and Samplifire start the album off with “Power Alliance”, a hard-hitting hype song that will put you in the mood to break a rail. ECRAZE and Graphyt then collab on the track “Mechanoid Dreams,” which is followed by some slamming bass drops from Bandlez in “Scouts Honor”. BLVNKSPVCE closes out Disciple’s newest release with a choppy alien-like riddim hit that will have you begging for more. INFEKT, OG Nixon, Aweminus, and LAYZ are just a few of the other notable DJs that produced absolute bangers for the compilation.

Grab your neck brace and pray to the riddim gods as you prepare to listen to the compilation.

Stream Knights of the Round Table Vol.5 here. 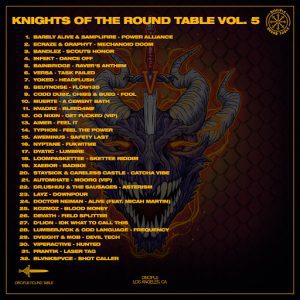 Author
Skyler Gee
Hi, I'm Skyler! I live in Arizona and I am a huge Bass head. I also love hardstyle, trance, and techno. I love traveling, lifting weights, camping, painting, running, and just getting to explore the world! Sending PLUR vibes out to all of you :)
Previous Article

8 Must See Artists At Defqon.1

B2B's And Fatherhood, Oh My!

byErika Minnix
We use cookies on our website to give you the most relevant experience by remembering your preferences and repeat visits. By clicking “Accept”, you consent to the use of ALL the cookies.
Do not sell my personal information.
Cookie SettingsAccept
Manage consent