Electronic music powerhouse Duke Dumont will soon be taking the stage at the acclaimed Shrine Expo Hall in the heart of Downtown Los Angeles. This makes for a rare appearance in Southern California for the multi-platinum producer and DJ as he returns to Los Angeles on May 8th, 2020 for his biggest show to date in sunny California. This announcement comes on the heels of the release of the Will Easton remix of Dumont’s most recent single “Therapy” this week, which has already garnered a combined seven million streams across all platforms.

The UK-based DJ is well known for his unique tracks that are simultaneously energetic and emotional, creating moving music that compels the crowd to dance the night away. Duke Dumont released his first three-track EP, Regality EP, and has since risen to worldwide fame. In 2013, he released one of his most popular tracks “Need U” that topped the charts in multiple countries and has garnered over 37 million views on Youtube. Again in 2015, Duke released another major hit single “I Got U”  featuring Jax Jones which was nominated for Best Dance Recording at the 57th Annual Grammy Awards. Through the 2020 year, Duke Dumont has hit the Billboard No. 1 spot for seven of his singles.

The 2020 year will be another big one for this internationally renowned producer as Duke Dumont releases new tracks and performs in Los Angeles at The Shrine, which is one of the largest venues in Los Angeles. This show is expected to sell out, so for those hoping to catch a live performance, this is the chance. Ticket sales open for pre-sale today on February 26th at 10AM and general sale will open on February 28th, 2020. For tickets, head to axs.com. 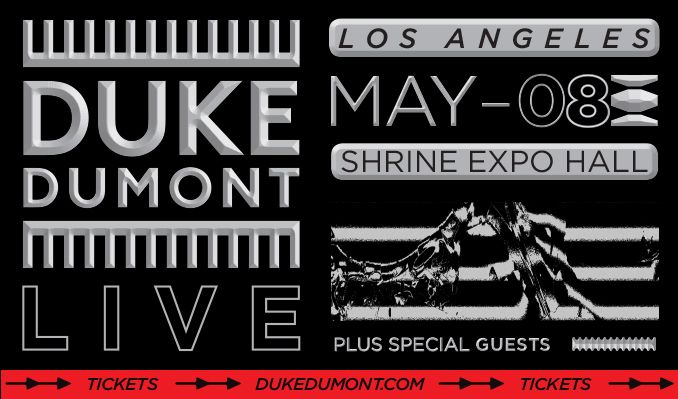