When we think about LED (Life Every Day) events we are often taken back to some of the memorable events down in San Diego, CA such as ‘Tramps Like Us’ and ‘OMFG! NYE’ (to name a few); this time however the LED production returned north to the city of Los Angeles and debuted in the Bay area respectfully for the first edition of Finger Lickin’. Finger Lickin’ this year was held at the Shrine Expo Hall located near the USC campus which has hosted various artists such as Kaskade, Alesso, and Excision over the course of a time. As the Valentines and Presidents Day weekend wrapped up, the EDM Maniac team awaited with anticipation as we ventured out for the night to an event that without a doubt blew us away.

Arriving at the Shrine Expo Hall we were greeted by a very welcoming tireless crowd of mixed music enthusiasts. After getting past security we entered the venue and as always LED never fails to astound us with their production. On the DJ stage was the one and only Ummet Ozcan warming up the crowd with the Armin Van Buuren hit “This Is What It Feels Like”. As the blue lights silhouette shined upon the thriving crowd, the drop rattled the whole venue as the deep base caused everyone to leap in unison. Continuing throughout his set with his own production of “Revolution” featuring the Nervo twins on vocals and Calvin Harris and Alesso’s hit “Under Control”, Ummet was one of the few that I personally was very eager to see. Towards the end of his set I was musically taken back as an electro house remix of Evanescence’s 2003 hit “Bring Me Back to Life” thundered from the speakers and did just that.

Following after Ummet Ozcan was the Scandinavian duo: Pegboard Nerds. Starting off with a dub step ballad, the duo progressed through the night with various remixes that have linked them with recognizable artists and groups such as Krewella and Mat Zo. “Disconnected” and their remix of “Live For the Night” had the room moving about in a trance like state ,which can be perfectly matched up as a star-gazing pattern illuminated the crowd on the LED wall overseeing the stage.

TJR can only be described as a man that can get you moving at any place and make you explode in energy. Taking over the crowd after Pegboard Nerds, TJR got right into his zone without a minute to spare. A ridiculous mash up of Dada Life’s “Kick Out The Epic M*therf*cker” and TJR’s undisputable track “Ode Te Oi” turned the Shrine Expo Hall into a sauna as the crowd hollered “Oi” after the track vocals and sent the energy through the roof. Sticking to mostly a red and white lighting scheme throughout his set, TJR rounded out his set with a few of his dance anthems such as “What’s Up Suckaz” and “Ah Yeah” featuring Will Sparks. Indeed one of my personal favorite sets of the night however that was only the beginning.

At around 11:30PM a deep rumbling within the crowd replaced the sound in the air. “Showtek! Showtek!” filled my ears signaling the time had come for the one and only group Showtek to play what an only be described as their epic return to the city of angels. “Slow Down” started off the musical euphoria session that I must say Showtek accomplished successfully. As CO2 cannons shot from the stage to ceiling (at times raining with confetti), green lasers grazing the crowd heads, and large white balloons bouncing in the crowd; Showtek gave us an hour full of their room rocking tunes such as “How We Do” featuring Hardwell, “Booyah”, and “We Like to Party”. Incorporating other melodies such as Hardwell and Mak J’s collaboration on “Countdown” and Tiesto’s remix of “Get Loose” Showtek easily controlled everything from the energy to the crowd all from the comfort of the stage which housed the DJs for the night. Closing off with “Cannonball” it was quite noticeable how the crowd wanted much more from the group. 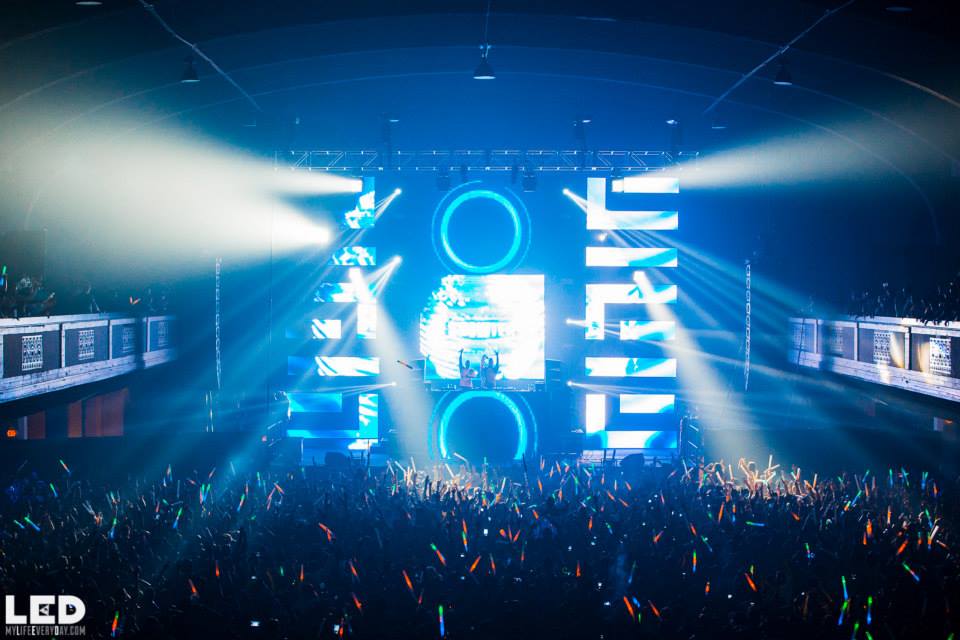 Wrapping up the night in a true dirty dutch style was the one and only Chuckie! Starting off with an instrumental version of “Calling”, the well respected DJ and producer was here to accomplish one goal: to make you never forget the night and that’s just what he did. Transitioning his signature dirty dutch sound with ballads like “Make Some Noise” and Dada Life’s “Born to Rage” everywhere I looked there were people dancing like it was the last festival ever. I must add though that there was a period which I refer to as ‘rest period’ or slower music section of his set as “Don’t You Worry Child” and “Reload” helped everyone catch our breaths, even if it was just for a few minutes. Using “Turn Down For What” to get everyone going was very obvious that everyone who had attended was not expecting all the production and quality sets in such a structured fashion, but that’s LED events for you hence why they’ll always have a special place in our hearts. “Who Is Ready To Jump” asked the question as the night came to and closed off Chuckie’s set. With the look of distraught and running on what energy remained, the venue erupted in full on confetti shower, lasers, and CO2 followed by screams and hollering from the crowd.

Finger Lickin’ was truly a well thought out event put together by LED and Goldenvoice coming together for another amazing production. The EDM Maniac team was  honored to have attended, and as always thank you to all the artists, the staff, and everyone else who made this night unforgettable. We look forward to reuniting and returning to the Shrine Expo Hall for more to come.