A Look At Excision’s Expanding Empire

A little over two years ago, a video came up on my Facebook timeline from Excision. He was debuting a new stage production which he would be bringing along on his new tour titled “The Paradox.” What began as a teaser video quickly took the dubstep world by storm and now the Paradox is an internationally known name. Little did I know that Excision was just getting started; and he was about to change the bass world as we knew it.

I’m just gonna say it, Jeff Abel (Excision) is one of the few undisputed kings of bass music. What that dude has accomplished in a couple years time is just unheard of. He’s done everything from stepping up an already amazing stage production (that was the Executioner) into the fully immersive Paradox production to launching festivals of his own. Excision’s tireless work to expand his empire has been most apparent in the last year, with the launch of several new events powered by some of the heaviest names in dubstep, PK sound and the Paradox and (of course) the man himself.

I thought we could take a moment here to give credit where credit is due and recognize all of the recent additions Excision has brought to the bass realm…. 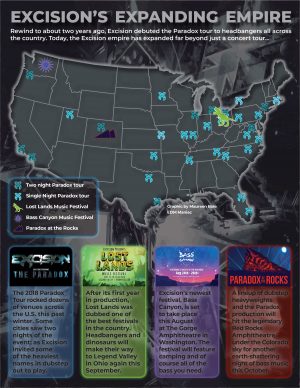 Excision made the Paradox Tour’s third year running even better than previous years (if you could even imagine that’s possible). He brought along fellow bass heavyweights Liquid Stranger, Dion Timmer and Monxx with him to most stops of the 2018 tour. Several major cities were lucky enough to see back to back nights of the Paradox Tour, creating a weekend worth of heavy bass goodness. Excision invited a bunch of other big names out to these shows including Doctor P, Cookie Monsta, Phase One, Trampa, Black Tiger Sex Machine, Space Laces and many more. After a full tour through the U.S., the crew took off overseas to bring the Paradox to Australia and Asia. Three continents in three months, NBD for the man. Sadly this year’s tour is already completed, but I’ll put money on the fact X is already plotting for 2019. 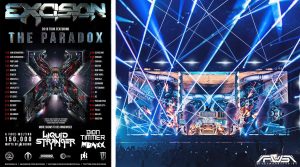 After its debut in September, there has been talk of Lost Lands being the best festival in the country. In one poll for ‘2017’s Best Festival’ Lost Lands earned almost half of the votes; beating out internationally renowned festivals Ultra, EDC Las Vegas and TomorrowLand, IN ITS FIRST YEAR. Usually, it takes years for a festival to get its bearings and earn a high regard in the EDM community but Lost Lands skipped all that shit and went straight to the top. I can personally attest to the fact that this festival is really worth all of the hype. It’s basically Disneyland for headbangers; featuring the best DJs in bass music, dope food and merch vendors, amazing stage production and life-sized dinosaurs. Oh, and did I mention X is bringing ONE MILLION watts of bass this year? Lost Lands 2018 is set to take place from September 14-16 at Legend Valley. Ohio is about to get rocked this September and I am so stoked to be a part of it again. 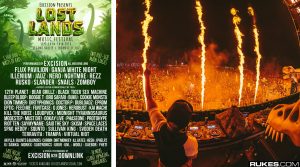 PARADOX AT THE ROCKS

Excision has played at some of the most beautiful venues around the country but is making his return to one in particular, but a bit differently this time. In March he announced his next event “Paradox at the Rocks” at the Red Rocks Amphitheatre in Colorado which is set for October 20. X will bring a couple hundred thousand watts of bass to the legendary venue along with several big names in bass including Skism, Trampa, Barely Alive, PhaseOne, Virtual Riot, Dion Timmer, Subtronics and Wooli. There will be more names to come, as there are still a couple spaces blurred out on the official flyer. 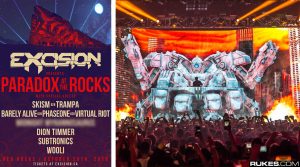 The biggest addition to Excision’s events was the recent announcement of Bass Canyon, a new festival to hit the Pacific Northwest August 24-26. Over three dozen bass “heavy-hitters” on the lineup will take over the stage at the picturesque Gorge Amphitheatre in George, Washington this summer. “We’ve partnered with The Gorge and Live Nation to produce the festival and run the camping, while we are curating the lineup and bringing out The Paradox in epic proportions with all the extra lasers, lights and madness you’d expect from a festival scale stage,” Excision stated in a post about the festival. Excision had previously talked about creating an event out west and I’m sure headbangers from all over the continent are thanking him for this one; sounds like a banger to me. 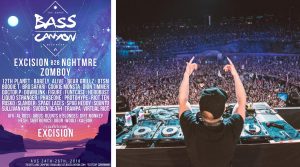 So with all of this madness, you would think that the man would be taking a break in between these events right? Wrong. The work never stops for Excision, who is set to perform at several other festivals all over the world this summer. His festival schedule (as of the end of April) includes stops at Shaky Beats (Atlanta, GA), EDC (Las Vegas, NV), Sunset Music Festival (Tampa, FL), Ever After (Ontario, Canada), Camp Bisco (Scranton, PA), Electric Castle (Romania), Parookaville (Germany), Lollapalooza (France and Chicago), Moonrise (Baltimore, MD), and of course his own festivals Bass Canyon and Lost Lands. 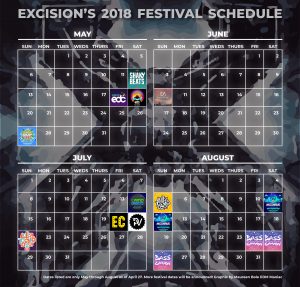 One of the coolest parts of all of Excision’s events is that I think he is far from being done. I wouldn’t be surprised if he has more big things in the works but, who knows? A headbanger can only dream, right?

Regardless, it’s been super dope to see all of these things come to fruition from his hours of hard work. He’s seriously one of the only artists I know who asks (and genuinely cares) about the fans’ input. He even sent out a survey asking us all who we want to see at Lost Lands this year. It’s a great time to be a part of the bass music community in the midst of Excision’s expanding empire.

How To Prepare Your Skin For Festival Season