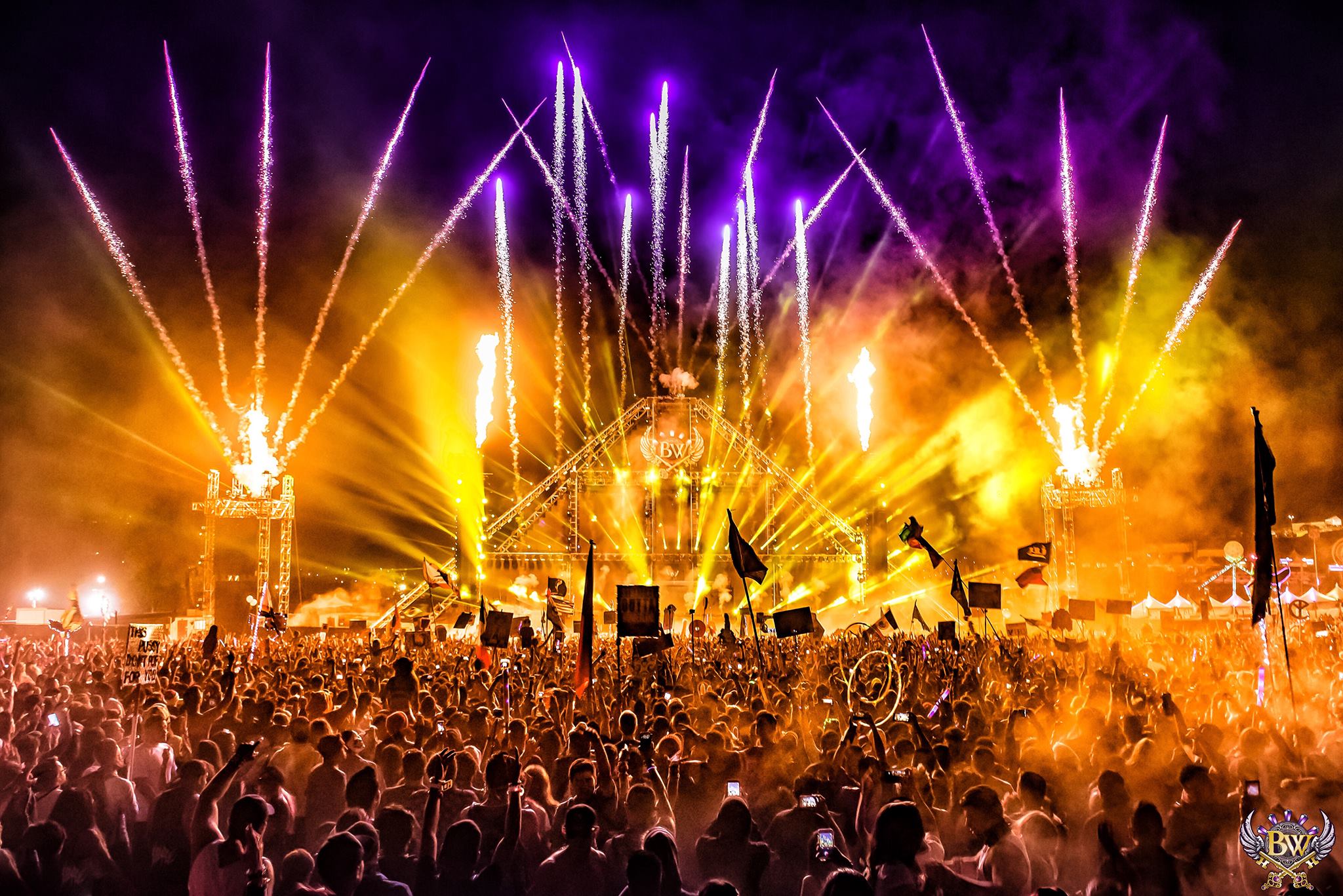 WHAT a start to festival season here in Southern California. Beyond Wonderland took over San Manuel Amphitheater and Grounds for 2 nights of insanity on March 18 & 19. The party was packed full of freaks, beats and treats.

I hit the road with my best friends early Friday afternoon to beat traffic. We left around 1pm and made it to our hotel in San Bernardino around 2:30pm. If we left any later from Santa Monica, we would have been stuck in traffic. If you can, be sure to get off work early on Friday if you ever head to a festival because traffic will impact your arrival time. Our hotel was very close to the venue, so we got changed and called an UBER. It took about 10 minutes to get to the UBER drop-off spot at the venue. I’m glad we arrived early because traffic was increasing which meant we were able to get through security without waiting that long. I had a VIP pass and that line was non-existent. That is one of the big perks with a VIP ticket, expedited entry.

Once inside the venue, we roamed around and took a lot of pictures. The installation art was on point. When you walked past the Dreamstate stage on Friday, there was a giant chess piece surrounded by some cool interactive works of art and orb-structures you could climb in. There were also free cell phone charging stations atop the hill overlooking the stage. I was already impressed with how Insomniac Events tricked out the hill above the Dreamstate stage, and was eager to explore the rest of the grounds.

We caught the first DJ to take over the decks at the Dreamstate stage, which was dedicated to trance music on Friday. John Van Deynhoven got the party started and set the tone for the night at the Dreamstate stage. I was so excited to see a number of familiar totems including that glowing alien one which has been at both Dreamstate events. The totem game was on point all weekend long, from Donald Trump totems to some creative works of art that were lit up with LED’s – everyone took time to create a masterpiece!

My friends and I then walked around the grounds taking more selfies and pictures with some of the costumed performers. Insomniac Events brought out dozens of performers for Beyond Wonderland, and it reminded me of EDC. They were decked out in flamingo costumes, furry animals, horses, royal Queens and even palm trees! The costume creations were flawless. The Queen’s Domain stage, aka main stage, reminded me of the bass pod stage that was at EDC Las Vegas back in 2014. It was tricked out with LED’s, lieghts and a lot of lasers. The graphics were insane and took me on a few intense journeys. The Dreamstage stage was similar to the main stage used at EDC Las Vegas 2012. The fact that the stages were similar in design didn’t bother me, instead, it reminded me of some great memories I had at each of those stages.

The big VIP section was along the left side of Queen’s Domain. It was packed with gourmet food trucks, bars, free snacks, free charging stations, costumed performers, seating and air conditioned bathrooms. I never had to wait more than 2 minutes to use a clean, freshly stocked restroom with running water and soap. It truly pays to get a VIP ticket if you want to party in style. VIP ticket holders were also granted access to the Silent Disco on Friday and Saturday night.

We headed back to the Dreamstate stage to catch Vini Vici’s set. We also met up with the rest of our crew here and found a prime spot right in front of the stage. We had plenty of room to dance along the left side of this stage and we could come and go without an issue. Vini Vici is a duo, but just one of the members played at Beyond. That didn’t stop him from throwing down a wild set full of their hits like “The Tribe” and “Free Tibet.” Up next was my favorite set of the night, courtesy of Bryan Kearney. This set was full of feels and I nearly lost it when he dropped a remix of Ferry Corsten’s “Beautiful.” You could feel the intense energy in the air all night long at the Dreamstate stage. It was a feeling I will never forget.

Our next adventure took us to the Cheshire Woods stage, which was the giant circus tent. Waze & Odyssey threw down a fierce set full of thumping techno and filthy house beats. We were able to find a section in the front that wasn’t too crowded so we could dance! Lasers would explode with every drop and you could hear everyone scream with excitement. My only complaint about this stage was how it was a little uneven to dance on. I found myself dancing upwards on a slope for most of my time there which did a number on my legs. However, that didn’t stop me from spending HOURS dancing. There was also a VIP area adjacent to this stage where I could get drinks. This stage reminded me of the Yuma Tent at Coachella and the massive circus tent that has been used at TomorrowWorld. I just wish it had wooden floors like the Yuma Tent, as it makes dancing much easier!

We closed out Saturday night with Ferry Corsten presents Gouryella. I wish this set was longer than one hour, but it packed a punch. Our crew left about 15 minutes before the party ended so we could grab an Uber back to our hotel and get some much needed rest.

Saturday was dedicated to more techno. We arrived to the venue around 5pm and it seems like everyone else had the same idea to arrive early. There were a lot more people in line than Friday, but entry was simple thanks to my VIP pass and dedicated line.

We set out to check out the Upside Down Room because we hadn’t ventured over there yet. I loved how the performers were dancing from the balconies and urging us to take pictures of them. The house music coming from here was great as well. Big props to those artists who played here!

Sleepy Tom got things started for us and thousands more at the Queen’s Domain stage. I was overjoyed to hear some of my favorite songs – like his remix of “I Want Your Soul” by Armand Van Helden. Sleepy Tom also played a lot of his remixes like Diplo’s “Be Right There.” His fusion of house, trap and hip hop had the crowd dancing in the daylight!

Our third stop of the night took us back to Cheshire Woods to hear the sounds of My Nu Leng. WHAT A SET!! This had to be my favorite set of the entire weekend. The techno was explosive from this duo. This was my first time catching one of their sets, and now I’m a fan for life! I’ve been stalking My Nu Leng’s Soundcloud page to hear more of their music. You should too.

We then caught up with our friends and met up at Queen’s Domain for Alesso. The last time I saw him was at Coachella, and he didn’t disappoint with his performance at Beyond Wonderland. He had quite the opening, with fire, lasers and lights blasting off into the air. His set was full of new music and remixes as well as some classic Alesso tracks that had the crowd singing along.

Our crew stayed here for Seven Lions and part of Yellow Claw. Both were spectacular performances which packed out main stage. After our dose of bass music, we headed back to the Cheshire Woods tent to close out the night with more techno, courtesy of Pan-Pot. The group had us dancing around the tent as lasers were unleashed above our heads. The vibe in this tent was full of excitement as techno-heads anticipated every drop. We shut down the party and left at 2am, along with thousands of others. Fortunately, we were able to get an Uber right away and headed back to our hotel room to decompress.

I always have fun at Beyond Wonderland. This year was no exception. I will say having a VIP pass allowed me to bypass lines at the GA bathrooms because I would use the VIP ones instead. This saved me time, so if you ever ponder upgrading to VIP, DO IT. It is totally worth it for the bathroom perk alone.

The music was great all weekend long and I’m hoping every artist posts their set online so I can relive the magic that was Beyond Wonderland Southern California 2016.