I’ve attended HARD Summer festival in 2014 and 2016 and this year has to be my favorite hands down. Now that the festival is produced by Insomniac Events, the production and infrastructure compared to previous years was a huge improvement. Once again, HARD continued to bring top of the line headliners from rap to electronic music.

The heat was at an all time high this year however, attendees were greeted by plenty of shade structures, cooling fans, and 5,000 feet of misting lines inside “Shady Lane” – the pathway going across the Speedway that kept people under the shade and cool.

Compared to the last time I attended HARD, kandi,  LED flow toys, totems were not allowed so it was a totally different feel and vibe this year with all those things present this time around. It definitely felt like more of a rave than a regular festival this year. It even had a couple attractions including a ferris wheel and bumper cars.

My favorite sets of Day 1 has to be Sullivan King, Fisher, and Zeds Dead b2b Jauz. All in all fans were pleased with all the sounds emitting from the five stages as you walked from one stage to the next. The Corona Electric Beach stage was also a personal favorite of mine. Great vibes all around while dancing in the sand.

Day 2 was another hot day. Fortunately, for those who had VIP this weekend they had a huge pool where people were able to dance and stay cool while listening to beats from the stage. From what I heard this year, VIP was totally worth it. 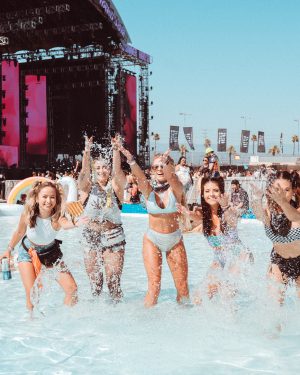 I stopped by to check out The Purple Tent and it was in full force with rap and hip-hop with a crossover of electronic music taking the stage as well.

The Pink Tent threw down and was popular this day with DIRTYBIRD artists taking the stage including Sacha Robotti, Will Clarke, and the debut of ESCAPADE (Walker & Royce and Ardalan).

I ended the night with Diplo b2b Dillon Francis and quickly walked over to the other side of the Speedway to catch the SoCal debut of Virtual Self. Both sets drew in large crowds and were a personal favorite of mine for the whole weekend. 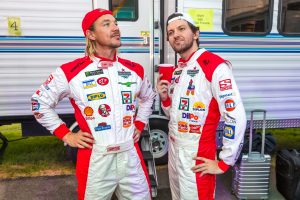 HARD Summer 2018 consisted of top notch stage production, misting structures and “Shady Lane”,  free water refill stations, and more. The vibes, creativity in outfits and totems, and a little bit of PLUR made HARD a memorable event. Can’t wait to see what HARD has in store for 2019!