Insomniac announced today the second phase of the third annual EDC Week Charity Auction. Once again, there are several once in a life time artist-related experience that you can bid on such as hanging out backstage with Tiësto or going on a helicopter ride with Above & Beyond.

The charities Insomniac partnered with in the past are Culture Shock and The Shade Tree where they’ve raised over $200,000. This year they are raising money for the Boys & Girls Clubs of Southern Nevada to create art programs for all Clubs in Southern Nevada.

Almost 30 artist-related experience are available now for bidding until Thursday, May 11 at 12 P.M PDT.

Many of the bids start at just $0.99. Insomniac will donate 100 percent of funds raised from the EDC Week Charity Auction to the Boys & Girls Clubs of Southern Nevada.

To look at all the experiences available and to place a bid go to ebay.com/insomniac. 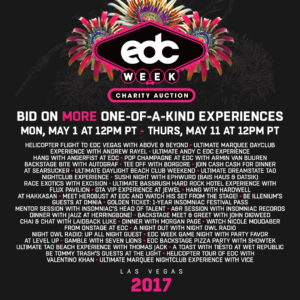 Budweiser Made In America 2017: The Chainsmokers, Kaskade & More

5 Things We Can Learn From Fyre Festival