Are You Ready to Ring In The New Year at Insomniac Countdown NYE?

New Years Eve is about reminiscing and closing a chapter in your life and opening a new. So what’s better than partying and dancing the night away with some of the biggest EDM artists in the world? Of course, spending it at Insomniac Countdown NYE  which will be held at the fan favorite NOS Event Center in San Bernardino, CA. Insomniac Events is returning to this beloved venue that they just held Escape All Hallow’s Eve. It will be a special place to bring that energy and love back that you’ve experienced before, or create new memories that will last a lifetime!

Insomniac Countdown NYE will be held in a fully decorated NOS Event Center tent with breathtaking visuals and production that will surely impress every festival-goer who will be getting down to the many different genres of music. There are plenty of other events to attend on New Years, but Countdown is where you’ll want to be for so many reasons: like having a brand new experience that no one in the world has ever seen, and getting to make history with your Insomniac family! Plus you’ll be able to express yourself freely wearing whatever you like and party amongst people from all over. Part of the anticipation and excitement leading up to Countdown is that it’s Insomniacs first ever 18+ New Years event. Insomniac will have fans going wild with a massive lineup featuring  Audien, Bingo Players, DJ Snake, Laidback Luke, Porter Robinson, and Showtek for New Years.

Audien, a young producer out of a small town in Connecticut, has produced progressive house and trance music has been captivating the EDM scene all year round, most recently with his hit song ‘Hindsight.’ He just wrapped up his AUDACITY tour after a festival-packed year with appearances at EDC and TomorrowWorld.

The Dutch Electro-House group, Bingo Players will also be one of your music conductors. The dynamic duo has swept audiences around the world with their energetic club hits. Unfortunately Paul from the duo lost his life to cancer in 2013, and the other half, Maarten announced earlier this year that he would continue Bingo Players as a solo act. It will most certainly be an emotional moment to see him spin tracks such as “Rattle” on stage alone, but we know the crowd, together with Maarten will surely bring all the energy. Grammy nominated Trap phenom DJ Snake has gone platinum with his hit “Turn Down for What” and his collaboration with Dillon Francis “Get Low” will definitely have the crowd jumping. His energy and attitude is going to put you in a wicked frenzy.

The superhero of the EDM world, the one and only, Laidback Luke will grace the stage at this year’s Countdown. With his super huge stage presence and massive Electro House beats, he’ll make everyone in the crowd feel like a superhero, especially when he drops tracks like “Flashing Lights.”  The young stud of the night, Porter Robinson will make a highly-anticipated peformance. Porter is young in age, but far away from that when it comes to his musical abilities. Having multiple number one hits in more than one genre of the EDM world, he’s undeniably showed us his diversity in a huge way. Everyone will be in for a treat with songs like “LionHearted” ft. Urban Cone and his debut album “Worlds” which was released in August 2014. The former Hardstyle act transitioned into Progressive Electro House, Showtek will hit the decks and will fill surely fill your body with all the energy it needs to start the New Year. These two Dutch brothers beyond any doubt will have you raging your heart out with their electrifying songs like “We Like to Party” and “Cannonball”.

With these incredible artists all in one place, coupled with the vibrant energy and production that Insomniac is known for, this is your chance to be part of history and have a once in a life time experience for New Years. YOU want to be part of Insomniac’s first ever “Countdown” because YOU ARE THE HEADLINER.  The fans are truly what make Insomniac events a memorable experience. As the saying goes: “Tick-Tock Goes the Clock, Where Will You Be When the Beat drops?” 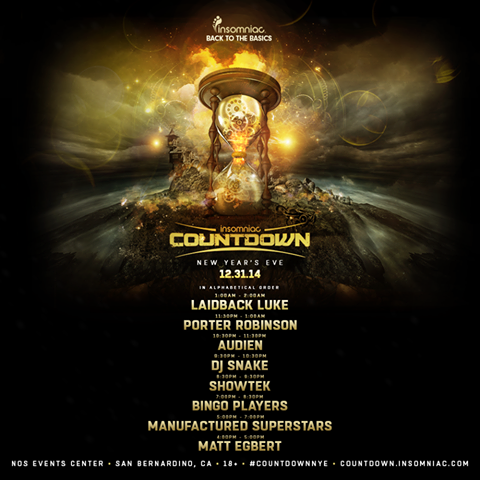 Everything You Need To Know About Insomniac's White Wonderland 2014