Review: Insomniac Slays Halloween With Most Epic ‘Escape’ To Date

This past weekend, Escape Psycho Circus returned to the NOS Events Center for a ninth season of Halloween festivities in the biggest year yet with 135,000 attendees. While events hosted by Insomniac never disappoint in the production department, this year at Escape proves yet again why Insomniac holds the title of best festival production in the states and arguably worldwide. Insomniac CEO Pasquale Rotella and his team truly outdid themselves this year as they took the production factor to the next level with an attention to detail that was nothing short of mind-blowing.

Two days was not enough to take in every detail from the décor to the little surprises that were left to be discovered as you wander through a Halloween fairytale world. Even though many of us are drawn to festivals because of the music, Escape 2019 showed us that festivals can take you beyond the stages by curating a magical experience that can best be described as otherworldly. If that was Insomniac’s goal, mission accomplished! 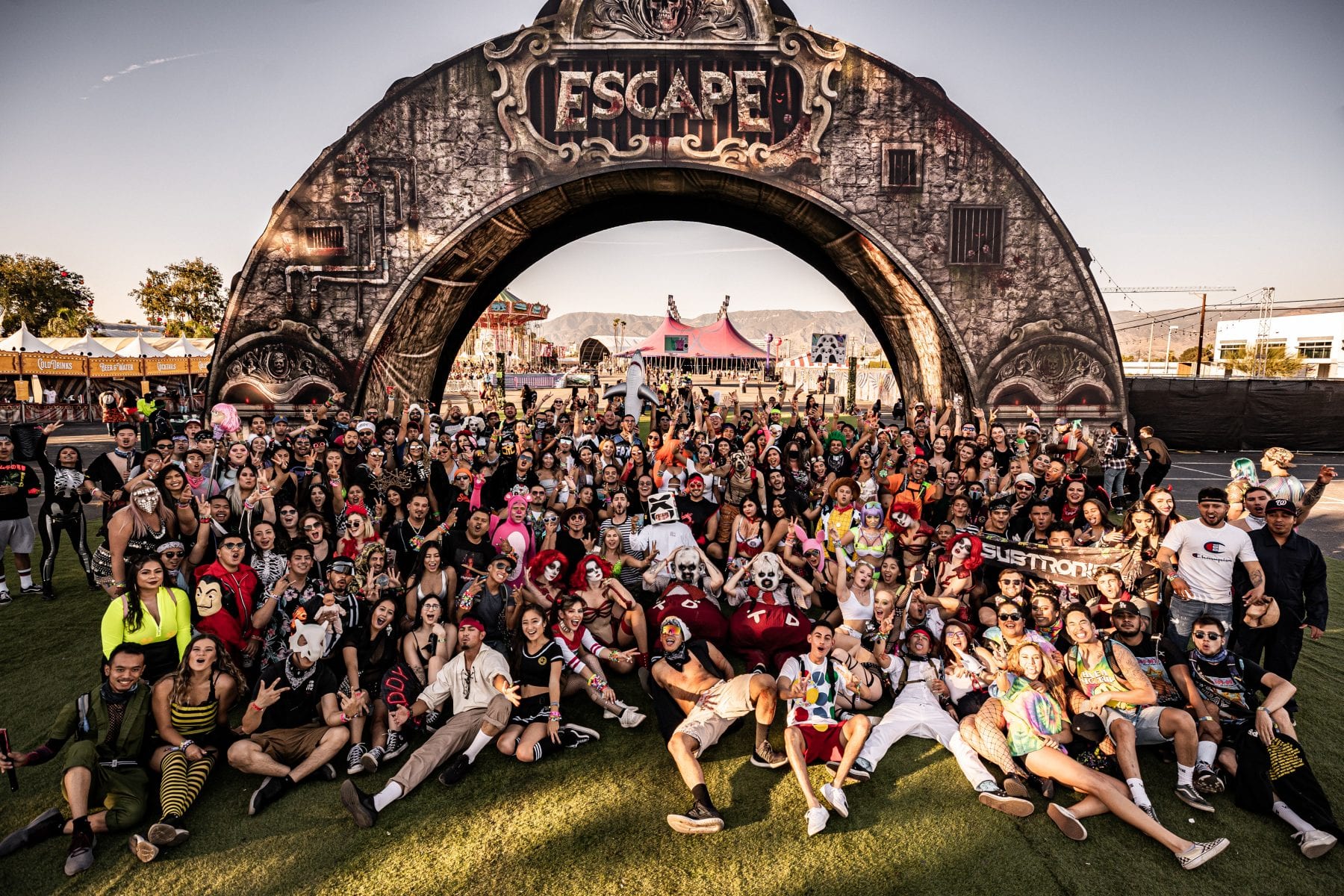 Insomniac is well-known for their production quality, and this year Escape exhibited production that was above and beyond all expectations. From the moment you walk inside, you are instantly taken into a different world as you are greeted by various entertainers that are dressed as unique themed characters, including fortune-tellers, contortionists, aliens, and more. Our personal favorites were the Vanity King and Queen, dressed impeccably to play the role of “dead” Prom King and Queen. As you look beyond into the festival, your eyes are met with a haunted carnival-themed backdrop complete with carnival rides including the original Ferris wheel, themed characters galore, spectacular lighting, extraordinary theatrics, and elaborate decorations. This year, a new addition to the art installations included the infamous flame-throwing octopus from EDC Las Vegas…also known as El Pulpo Mecanico. 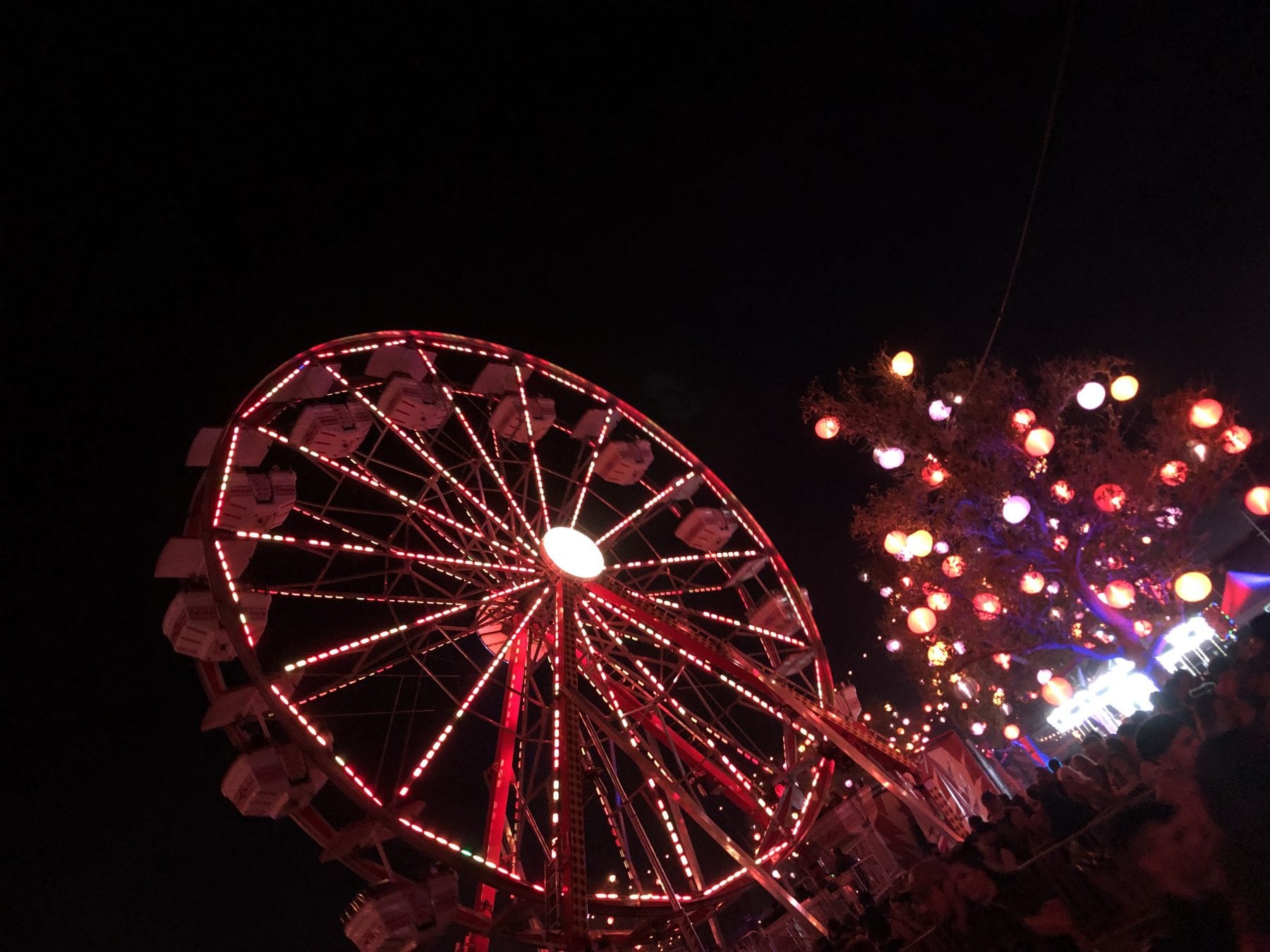 As a fully immersive experience, you are quick to forget that you are in beautiful sunny California as you are transported into Halloween heaven. For those that had VIP passes, attendees were given an enhanced experience in addition to the VIP lounge areas. New to the VIP section this year was a hot chocolate bar and popcorn bar, complete with all the toppings of your desire. This was in addition to the bead station, which allowed guests the chance to make their own kandi bracelets. Within the VIP lounges, various art installations were set up that gave guests the perfect photo opportunity. Our favorite this year featured a giant sloth sitting on a couch, which was accompanied by a charismatic performer dressed as a sloth. 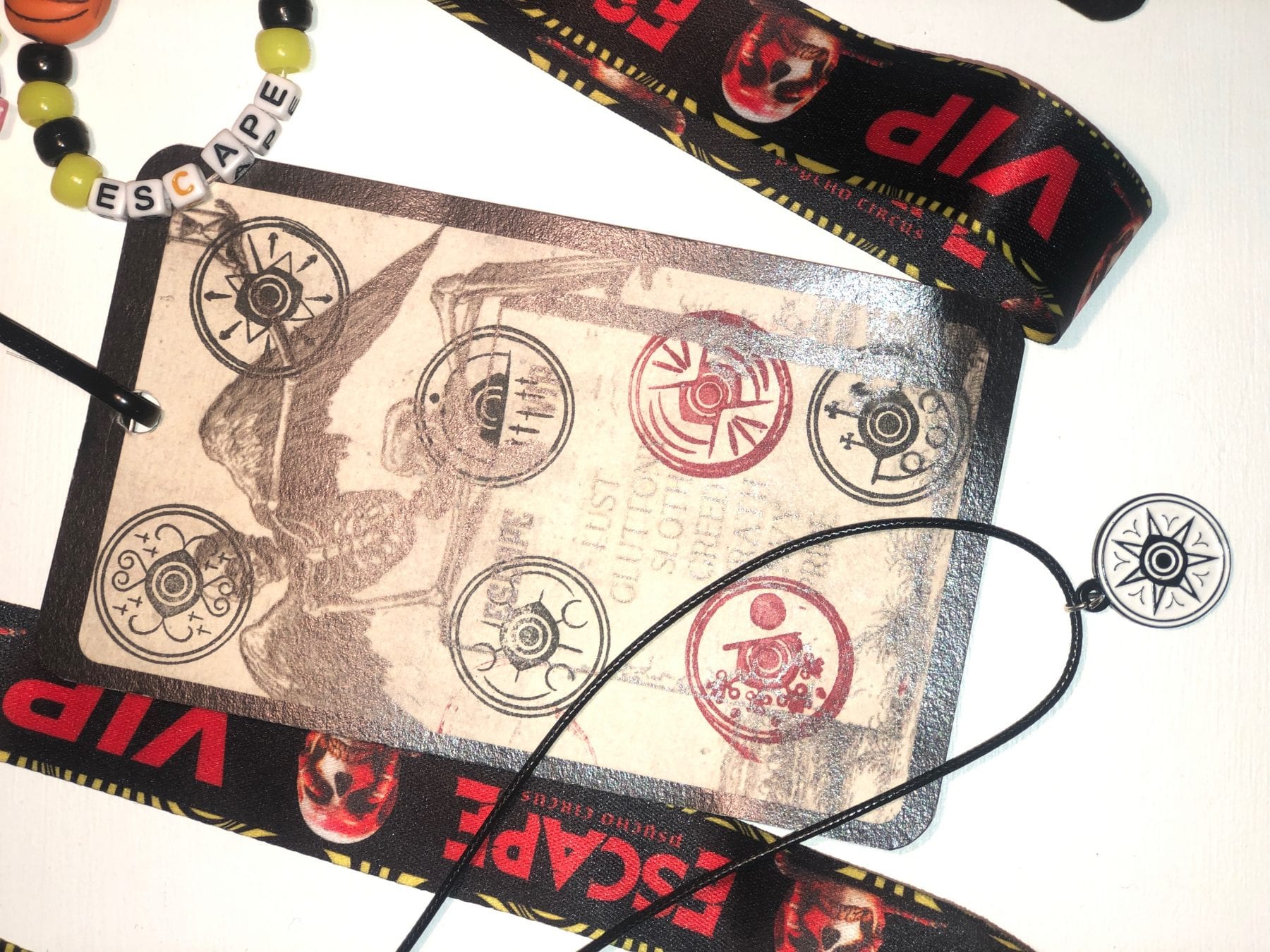 For those that chose to participate, an exclusive VIP scavenger hunt took you to seven secret photo booths throughout the festival where you received a stamp for each photo taken with various exhibits. At the end, guests were rewarded with a special necklace from Insomniac. Our favorite this year was the Wrath Box, which was a booth you stepped into and pulled a string, resulting in a variety of surprise pranks to be played. As always with VIP, guests are treated to a next-level experience which included full-scale bathrooms, closer viewing of the stages, food and drink bars with nearly no lines, lounge areas with couches, a makeup and braid station, and a complimentary hookah bar. For all the surprises included as part of the enhanced experience, the VIP passes are definitely worth the extra price. 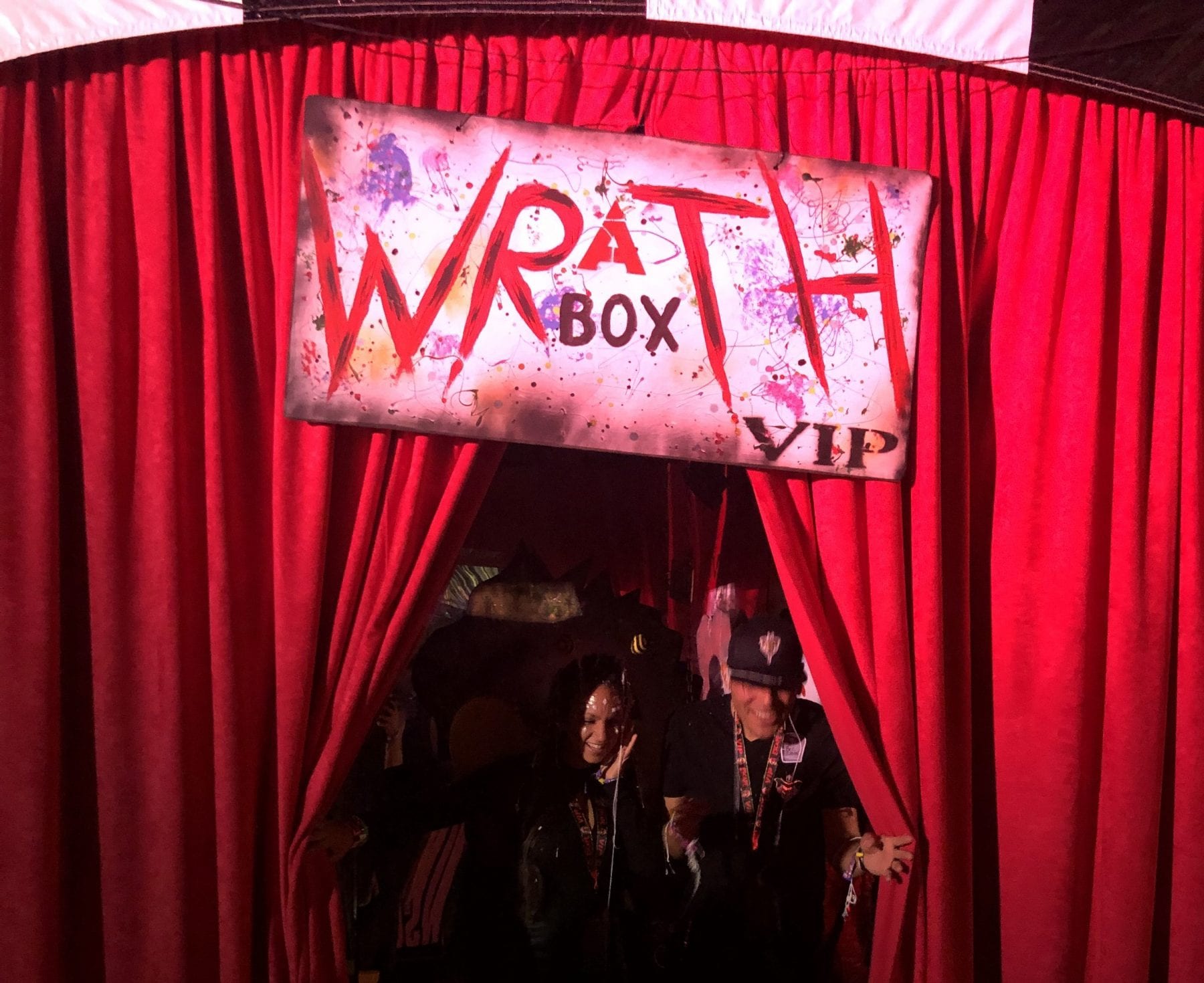 As you make your way into Crazy Town, you are further transported into the elaborate world of the Psycho Circus created by Insomniac. Crazy Town is a new section this year, which is reminiscent of the Downtown EDC area complete with bars, a silent disco, a butcher shop, and many other attractions. The Crazy Town area replaced what was previously The Asylum where the haunted house was located in prior years. This year, The Butcher Shop took over as the haunted house as you stepped inside to be greeted by a creepy butcher and walk through a scary butcher shop. Within Crazy Town, the Insomniac crew stepped up production further with the theatrics and performers to really make you feel like you are in a spooky downtown area. For drinks, we stopped at The Well which featured a glow-in-the-dark bar that was centered around a giant glowing Venus fly trap plant. Upon entering, you are handed 3D glasses to enhance the experience and make the features stand out. Other features worth noting were The Poison Ivy apothecary, the silent disco at Dance Macabre, and the Lost Fountain of Souls display which featured a fire-spouting organ that became a staple photo opportunity this year. 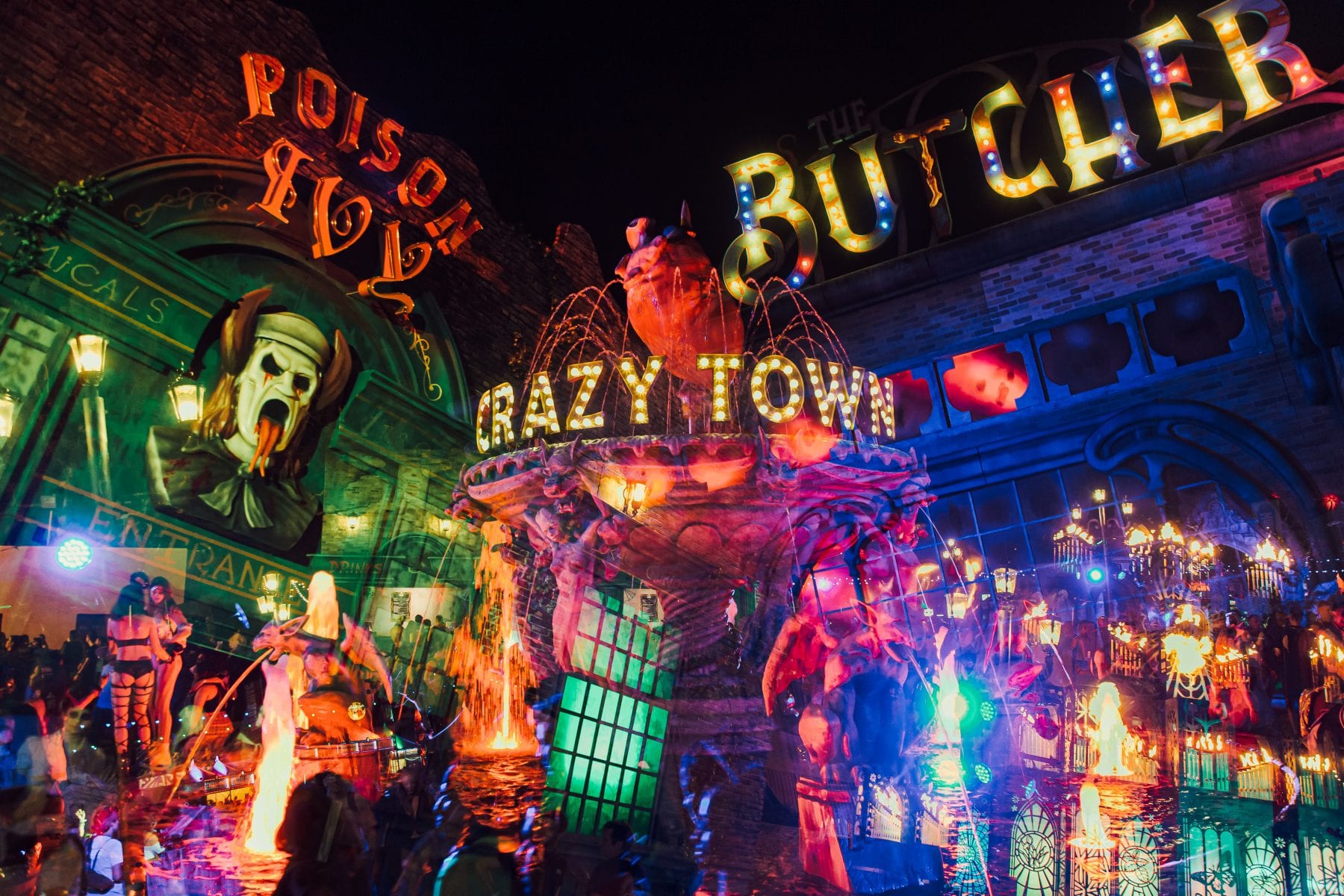 Other fun features this year were the food and drink specials, a tarot reader, and the newly added carnival rides. While the Ferris wheel has always been a staple at Escape, this year they added hanging swings and a spinning ride for those looking for a full carnival experience. As far as drinks go, our personal favorite was the Pasquale Glowtella which was a mix of tequila and the popular antioxidant drink Glow. After all, there is no better way to stay hydrated at a party than drinking electrolyte-rich drinks! As for food, there were so many fantastic options from famous food trucks to local restaurants, but we were extra excited to see the legendary Kogi truck make an appearance this year. 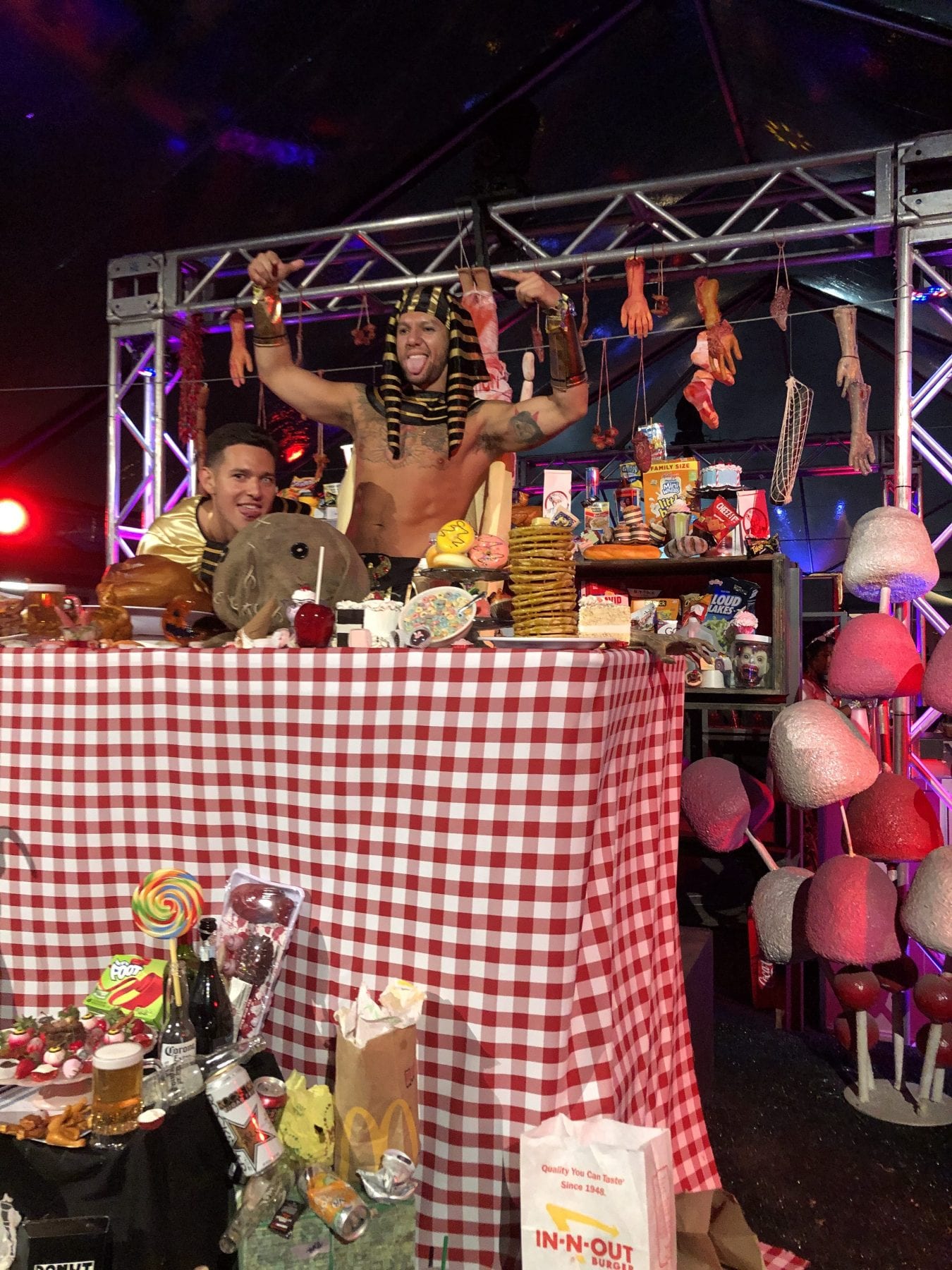 Insomniac put a level of detail into the experience this year that made it possible to spend two days at the festival without ever staying to see a DJ even perform. But of course, the festival is centered around music and as always, Insomniac brought in the best of the best in both local and international talent with 70 headliners. This year, the stages were fully redesigned and featured many new production elements that showcased the ability of Insomniac to deliver the most innovative stages accompanied by state-of-the-art sound production and elaborate light shows. 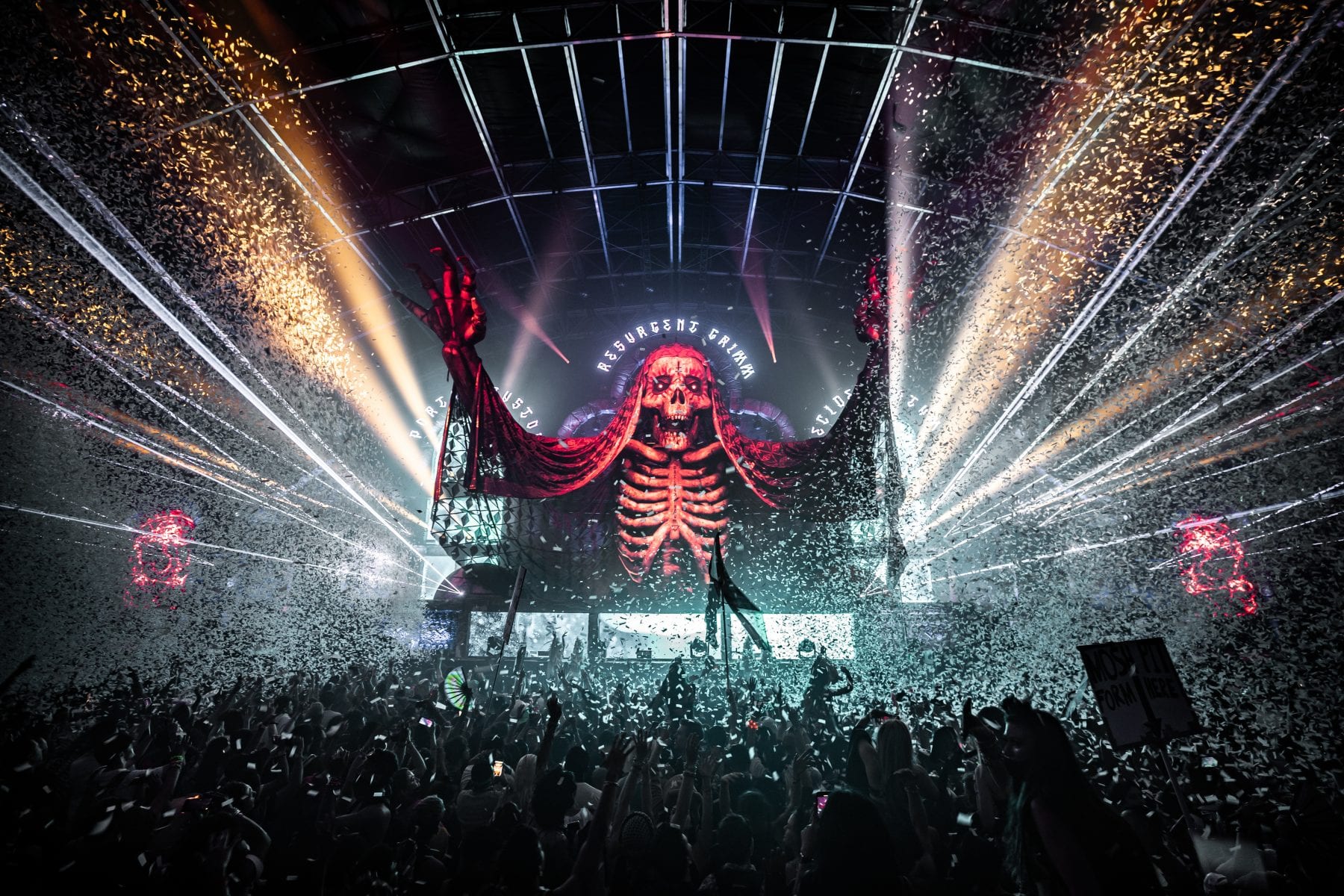 The year, The Grimm debuted the largest megastructure in Insomniac history and featured performances by Timmy Trumpet, Said the Sky, Don Diablo, Deadmau5, Alok, Duke Dumont, RL Grime, and a phenomenal close-out performance by Alesso. At the front of The Grimm, a large-scale skeleton adorned the stage. During the performances, the skeleton raised its hands into the air, opened its mouth during lyrical parts of songs as if singing, and slowly raised itself higher as the night went on. Meanwhile, the skeleton’s eyes lit up various colors as lasers cast themselves in mind-blowing displays throughout the megastructure. The Grimm housed over 328 video panels, 550 lights, and 32 lasers to provide the best light displays in Escape history. Over at The Sewer District, Anna, Bicep, Kolsch, Stephan Bodzin, and others took the stage as part of Factory 93. Charlotte de Witte did a b2b set Chris Liebing in an energy-packed performance that you just had to witness. 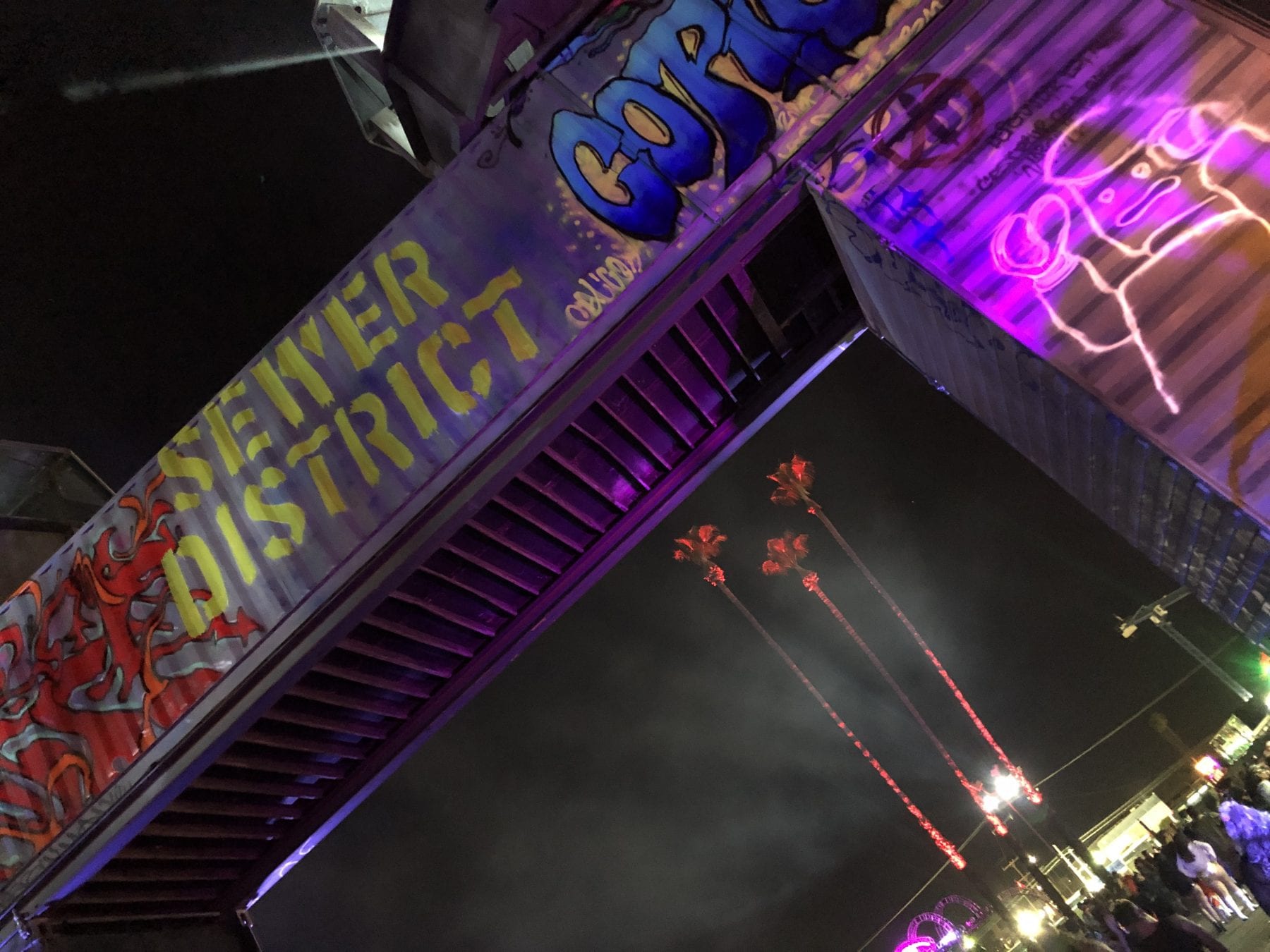 At the Psycho Circus stage Friday night, the lighting and visuals presented at the Psycho Circus stage were phenomenal and absolutely worth seeing featuring 351 lights and 19 lasers. In a Bassrush takeover, legends Excision, Borgore, and Bear Grillz took the stage. The next night, Psycho Circus featured performances by Chris Lake, Claptone,  Meduza, Eric Prydz, and an epic set by Nora en Pure in an exclusive b2b with Gorgon City. On Friday night, The Sanitarium was hosted by Basscon featuring Code Black, Headhunterz, DJ Anime, Sub Zero Project, and others. The next night, Audiotistic took over The Sanitarium to feature San Holo, Sober Rob, Boombox Cartel, and Valentino Khan. Complete with fantastic laser shows and high-quality sound production, The Sanitarium was a next-level experience from stages at prior years with 16 lasers and 4 gigantic fog machines. 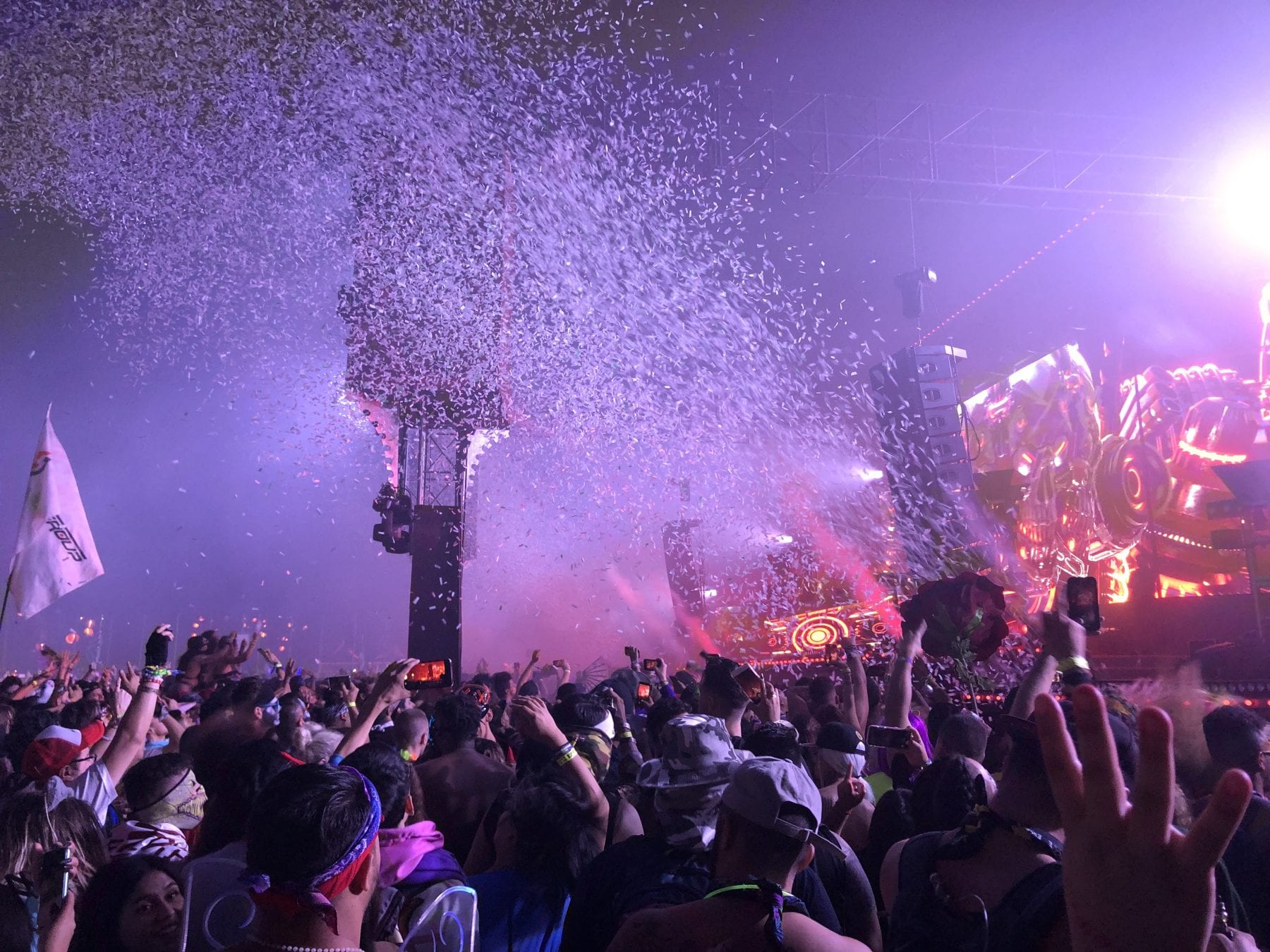 To say that Escape Psycho Circus 2019 was out of this world would truly be an understatement.  Insomniac delivered an experience this year that left many wishing for the third night, us included! Aside from the legendary lineup and epic stages this year, the attention to detail and focus on a full sensory immersion put Escape on the books as a top festival not just for Halloween but overall. Insomniac continues to surprise us every year and show us that festivals are an experience that goes above and beyond the music to leave us with memories that forever stay imprinted in our minds and hearts. With the experience this past weekend, we cannot wait to see what Insomniac has in store for us next year at EDC Las Vegas!