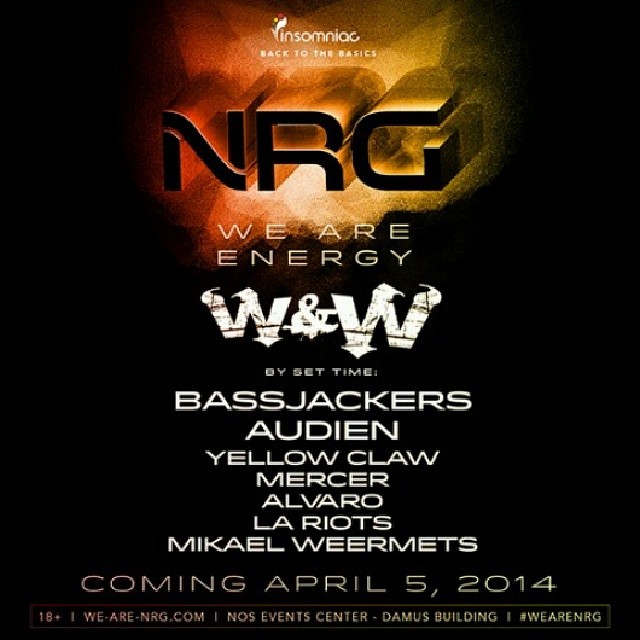 Insomniac Events Returns To San Bernardino For We Are NRG (SOLD OUT!)

Insomniac Events, the company behind events such as the Electric Daisy Carnival and most recently Basscon, returns this weekend to the National Orange Show Center in San Bernardino for another installment in their ‘Back to Basics’ event series. ‘We Are NRG’ kicks off the month of April with a lineup set to keep you up on your feet from start to finish. Reviving the electronic music culture spirit back at the NOS Center with the ‘Back to Basics’ series, Insomniac brings a minimal yet intimate production that will make you feel connected with your peers around you and remind you “that we are one when it comes to the music through the unity of it all. Welcoming festival favorites such as Bassjackers, W&W, and LA Riots to get the crowd up in roar expect more than just a typical event. Introducing Yellow Claw, Mercer, and Alvaro to add a hint of their own unique touch to an event already praised for the amount of “NRG” advertised; Audien and Mikael Weermets cool down the house with their uplifting melodic house sound set to fill your EDM ears and hearts. With the slogan and event name ‘We Are NRG’; expect a variety of surprises (including a 3AM curfew!) from start to finish in true Insomniac style that will keep you coming back to the NOS center for more nights to come.

We Are NRG: What to expect from the artists

Coming all the way to Los Angeles from Sweden, Mikael Weermets lives by one motto: “FUCK GENRES.” Currently taking a quick break from his Generation Wild tour, which features him alongside Deniz Koyu, Danny Avila and recently Thomas Gold, Mikael is more than ready to bring his personal take on the “Sound of Now” to the stage. His BBC Radio 1 guest mix “Dance Anthems” hit with such success it was later named the “Mix of the Year.” Be prepared to dance to the man who Tiesto has called “the next big thing.”

Los Angeles local Daniel LeDisko delivers a mix of techno, house, and drum n’bass. LA Riots originally began as an indie rock/dance duo in 2007, but since the split Daniel’s sound has taken on a new form that caught attention Tiesto, Laidback Luke, and even Sydney Samson, all of who he’s done remix’s for. His most recent works include “Kamikaze” with Polina, and “Rewind” with ThankYouX feat. Jessie Malakouti released on Dim Mak Records.

Alvaro is the creator the infamous “Welcome To The Jungle” track, so unless you’ve been living under a rock there’s a good chance you already heard some his work. He’s collaborated with Tiesto and Quintino on “United” and most recently released “Charged” with Glowinthedark, which prompting a North American tour. As his track “Make The Crowd GO” states, Alvrao intends to wreck the dance floor with his high energy house music.

Flying in from Paris, France Mercer delivers a set stacked with electro house. Already off to a big year Mercer has upcoming performances at EDC New York and LED’s My Life Every Day USA. He collaborated on his most recent track “Lunatic” with the sky-rocketing DJ Snake, released on Spinnin Records.

This trio of DJ’s comes all the way from the Netherlands to deliver their mix of electro house and trap. Still somewhat fresh to the scene the trio came together in 2010 and has already worked with EDM legends including Headhunterz on “Colors” and remixing Showtek’s “Cannonball.” Their most recent track is a remix of Martin Garrix and Jay Hardway’s “Wizard.”

Representing the East Coast from Mystic, Connecticut and only 22 years old hails to us Audien. He began sending out his demos at age 17 and was quickly picked up by Ferry Corsten’s Flashover Recordings Label. His productions consist mostly of Progressive House and Trance with already over 50 releases on Beatport. Audien’s music has been featured internationally on shows like Corsten’s Countdown, Tiesto’s Club Life, Above and Beyond’s Group Therapy, and Armin van Buuren’s A State of Trance. Recently he returned from a major performance at Ultra Music Festival, so get ready because We Are NRG attendees are in for a special treat.

Two friends: one DJ, one producer came together in 2008 to form the high energy Bassjackers. The duo has been destroying dance floors ever since with electro banger after banger. Tracks like “Hey!” with Showtek, “Grid” with Dyro, “Collision” with Ferry Corsten, and most recently “Crackin” with teen super-star Martin Garrix have been crushing festivals around the world. Bassjackers is in high demand right now having done remixes for Rihanna, Enrique Iglesias and Moby all while playing around the world from Las Vegas to Ibiza. Save some energy, the nights not over yet!

These headliners need no introduction as this duo has been making main stage appearances at almost every major festival worldwide. Fans voted W&W all the way to #14 on DJ Magazine’s Top 100 List this year. Songs like “Life Off!,” ”The Code,” “D# Fat” with Armin van Buuren, “Jumper” with Hardwell, and of course their most recent release “Bigfoot” are just a few of W&W’s huge hits. The energy these two bring to the decks is unparalleled by most making them a more than perfect fit to headline Insomniac’s “We Are NRG” event.