The countdown to Electric Daisy Carnival (EDC) Las Vegas 2020 has officially started! With the festival quickly approaching this May 15th-17th, 2020, the time has come to start locking in your plans for camping, hotel, and transportation. As of right now, camping is sold out with the exception of RV camping which is still open.

For those staying in the hotel, Insomniac has officially announced a shuttle service that will depart from various locations on The Strip and Downtown Las Vegas and will arrive at the gates located at The Las Vegas Motor Speedway (LVMS). The shuttle service is highly recommended, as driving and car services are met with heavy traffic, long lines, and sometimes hectic parking.

Insomniac will be offering both a standard shuttle pass and a premier shuttle pass. Regular shuttle passes go on sale tomorrow February 13th, 2020 at noon PST. Both passes include shuttle access for all three days with roundtrip transport between to and from the festival site. The passes will provide direct access to the festival with a drop-off at the festival gates.

A route from The Strip will be set aside to bypass the heavy traffic and will include a pre-check for security to bypass long lines at the festival entrance. To avoid waiting in the heat, Insomniac has provided air-conditioned tents, seating, free water, customer support, restrooms, and more at each shuttle stop.
The standard shuttle will run continuously from 6 PM to 11:30 PM for departures and will begin at 3AM for returns. The shuttle returns will stop one hour after the festival ends. The standard shuttle stops include locations at the following:
For the premier shuttle pass, guests will be able to reserve specific shuttle times to and from the festival along with an exclusive EDC-themed gift to each rider. Premier shuttles will be available from 6PM to 3PM for departures and the choice of an 11PM, 3AM, 4AM, and 6AM return. The premier shuttle stops include locations at the following:
To purchase passes, head here. The standard shuttle passes are $99 with layaway options available. The premier passes will go on sale on February 27th, 2020 and prices will be announced shortly. Mark your calendars to reserve your spot! With 2020 set to be the biggest year yet and tickets already sold out, we definitely recommend purchasing the shuttle passes to make your trip that much easier. 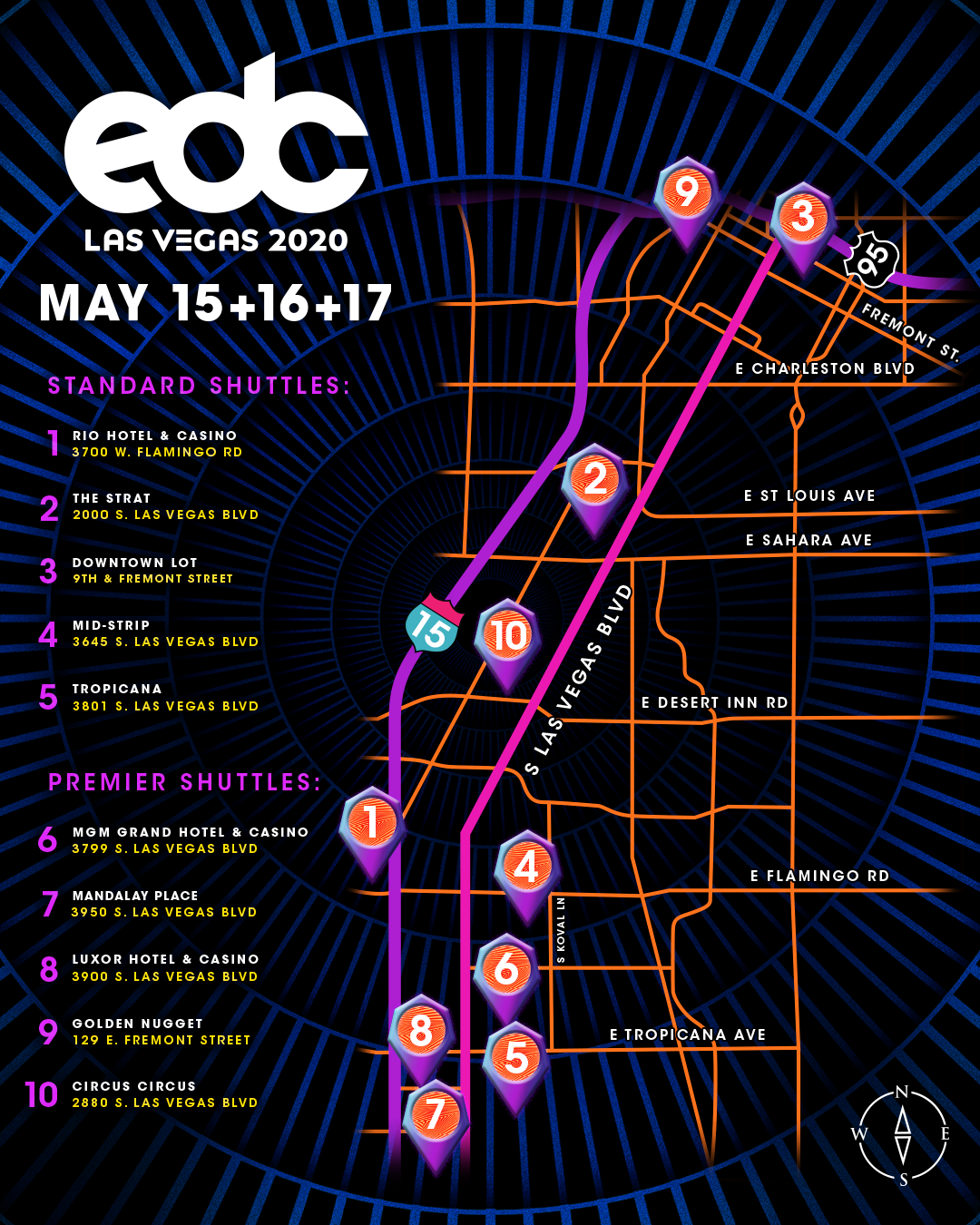