Forealism is the father-and-son DJ duo founded by Lawrence, and his son Thomas Malott and they are about to become your spirit animals.

With their sparkly bull costumes and the energy to start any party, the Miami-based DJs and producers began with costume design and public performances. After full lifetimes practicing music, they forayed into electronic music and have been performing at nightclubs, underground venues, and on their mobile DJ unit ever since.

Recently, Forealism has been focusing primarily on music production and their new track “Thunderstorm” is a testament to all their hard work. The future/tech house banger combines heavy beats with intense energy and feels like the combination of techno, club anthems, and the forces of nature.

We got the chance to interview Forealism about their experience as a father-son project and their incredible costumes. Read below: 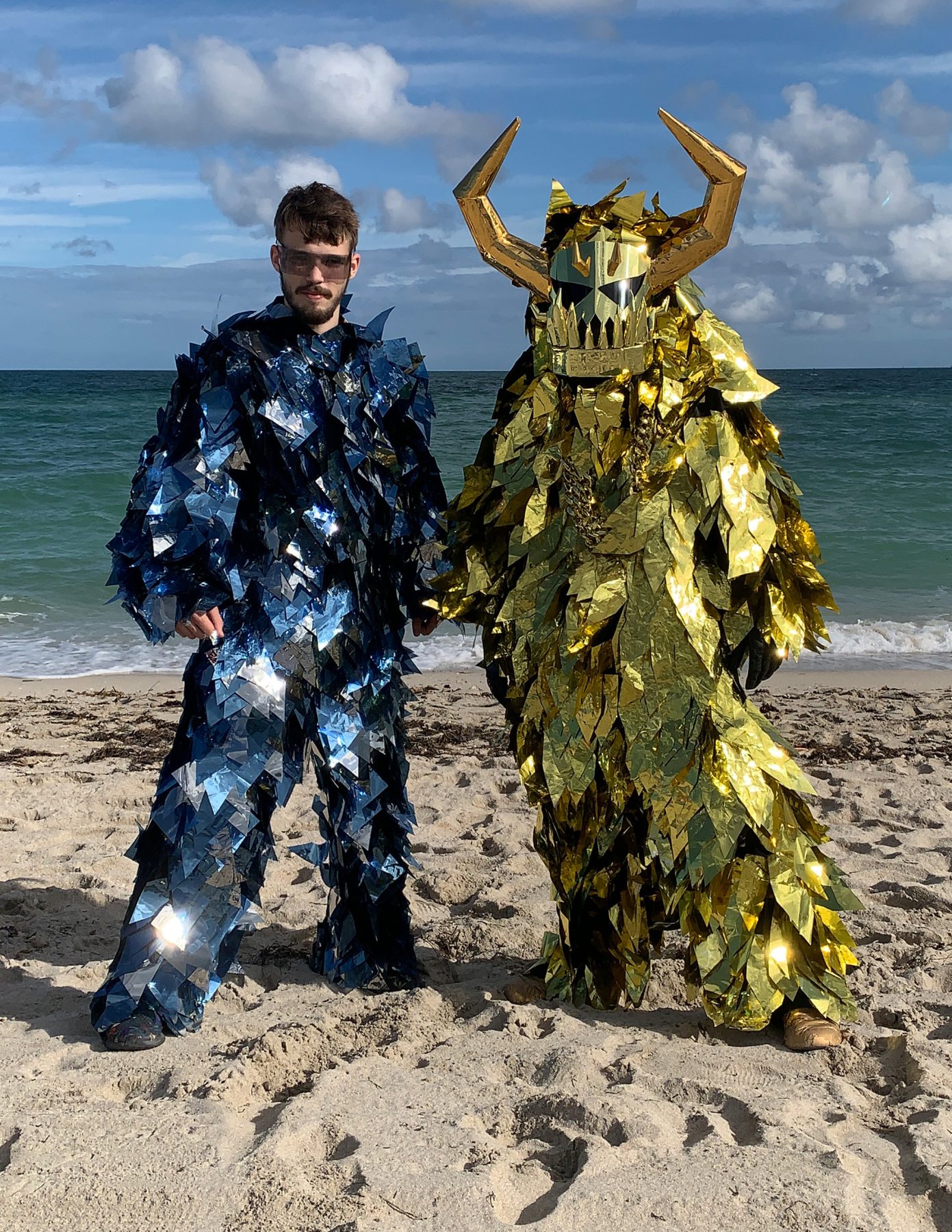 EDM Maniac: As a father and son duo, what is it like performing, producing, and writing together? How do you maintain both your professional and personal relationship?

Thomas: We’ve created together as long as I can remember, it’s always been natural to me. One of my earliest memories was throwing clay to build a life-size sculpture with my dad.

Lawrence: Sometimes he would stay up all night and help me work, even at an early age. We’ve basically always worked together.

Thomas: Yep, I’ve been raving since kindergarten! When we started to perform it was life-changing. It’s very energizing and there’s nothing like it.

Lawrence: It’s really amazing to share the stage and these adventures together. Art and music is our way of life.

EDM Maniac: You began by creating costume designs and public dance performances. How did you get started with that and what led you towards producing?

Lawrence: Growing up I was always around music and art. My dad was a musician and taught me to play bass guitar and my mom is a visual artist and taught me art and design.

When I was a kid, I was interested in movie special FX and I loved making my own Halloween costumes. After college, I started a business making superhero costumes and sculptures.

After doing that for many years I decided to change it up and create something new and original. So I developed Forealism in 2012. I really wanted to combine all my interests in costume, performance, and music together. I naturally gravitated toward festival culture because of the similarities and freedoms.

Thomas: I got started in music when I joined the school orchestra playing bass when I was 11. Later, when I saw what my dad was doing with Forealism I wanted to be a part of it.

EDM Maniac: On that note, your outfits are incredible, with sparkly exteriors and a horned animal head filled with dance moves ready for the next party. What was your inspiration behind the performance outfits?

Lawrence: Thank you! At a very early age, I was inspired by comic books and sci-fi movies from the 80s. But when I started to develop Forealism, I discovered the Wilder Mann (aka Wild Man) costumes.

These costumed characters are ancient and exist in almost every culture around the world. They represent the forces of nature and are often used in festivals.

The costumes are usually made with fur or vegetation and transform the performer into a creature. I was mesmerized by their appearance and movements, so I combined all of these different influences to create our look and our mascot the BEA$T.

EDM Maniac: You are known for your insane pop-up parties on Miami beaches using the Bass Rover, your mobile DJ Unit. What has been the craziest pop-up event you have ever done?

Thomas: One day we went out to South Beach and they were doing construction for a festival. Our normal performance spot was blocked by a huge fence and tent so we had to drag our equipment half a mile around to get there. When we got there, there weren’t many people in the area because of the construction, but we decided to play anyway.

Lawrence: The party was slow at first but then I jumped on our cooler and started swinging my chain around my neck. Everyone around was like “WTF Wow!” It got a lot of attention and that set the party off.

Thomas: Then there was a group of people that climbed a tall beach shed and and even the construction workers were dancing on lifts 50 feet up in the air.

Lawrence: Before we knew it there were 100 people dancing with us. All kinds of people; twerkers, shufflers, grandmas, and little kids, all raving together and having a great time.

EDM Maniac: Your sound is super unique, as exhibited by your new future house/tech house track “Thunderstorm.” How did you come up with your sound?

Thomas: Curating the sounds for production is a lot like picking songs for a DJ set, everything should be cohesive. We’re influenced by funk, metal, and disco so we experimented by mixing them with dance music to make something new.

“Thunderstorm” came together by playing with creating an atmosphere. The sounds meshed well and the breakdown is a response to the energy of the rest of the track.

Lawrence: Over the years we focused on developing a sound that resonates with us and complements our style, heavy but still fun. Working in the clubs and watching DJs like Afrojack, Lil Jon, and Cedric Gervais helped us hone our sound as well and showed us what was possible.

EDM Maniac: What can we look forward to in the future for Forealism?

Thomas: “Thunderstorm” was just released and we have more music coming! We’re working on a track with singer Jess Lamb and have some other collaborations in the works.

Lawrence: We just got a new tour van, the Foreal Mobile 2, and will be hitting the festivals and clubs soon. We are also working on a secret project with a big artist in Las Vegas, so stay tuned!

Give Thanks Festival Returns To NorCal With Excision And Above & Beyond