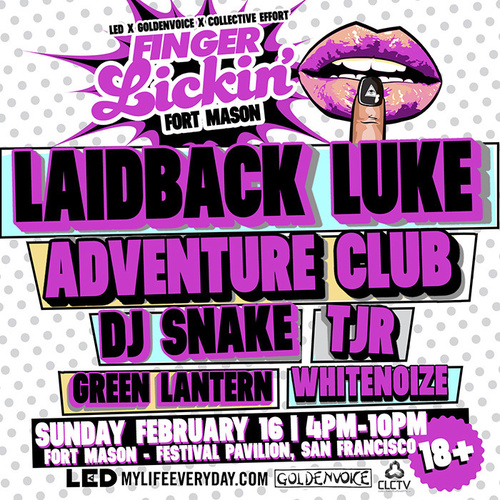 Valentine’s day and a three-day holiday weekend approach with a variety of show’s in the Bay Area, including the legendary So Stoked feat. Gammer, a Valentine’s day MASSIVE on Treasure Island, and the one we’re most excited for, LED Present’s Finger Lickin’ at Fort Mason! Northern California is in for a treat as LED Present’s throws their first show outside of Southern California.

If you’ve attended an LED event, you already know they bring beautiful, stunning productions at the San Diego Sports Arena and ridiculously stacked lineups. Recently expanding to Los Angeles, and now San Francisco, this is a show not to be missed. Bringing in the Filipino-Dutch mastermind Laidback Luke to headline, accompanied by Adventure Club, DJ Snake, TJR, DJ Green Lantern, and WhiteNoize, the Fort Mason Festival Pavilion is about to be transformed into an epic rave for the night.

For anyone experiencing these monster DJ’s for the first time, here’s what you can come to expect from each of them!

Hailing from the far north of Quebec, Canada, this duo will be sure to have you jumping on your feet with their epic dubstep, drumstep and electro house. Steamrolling after one of their first big remix’s ‘Daisy,’ you can find these two at many major festivals, including headlining this years Life in Color, Chicago.

Born in France, DJ Snake (or as some of you may know him on twitter, Turnt Cobain) is skyrocketing in the trap scene. With popular releases such as ‘Bird Machine’ and ‘Turn Down For What’ feat. Lil John, there’s a good chance you’ve already heard of him. Grammy Nominated for album of the year after producing Lady Gaga’s “Born This Way”, an essential mix on BBC Radio 1’s Future Star’s series, his work releases on Mad Decent, and guest appearances on “Diplo and Friends” are just a few recent highlights of this DJ’s career. Be sure to check out his newest track with Dillon Francis ‘Get Low.’ We’ll be waiting for the roof to go off when it drops.

If you’ve been to an LED show you’ve probably seen TJR. From Connecticut originally, TJ Rozdilsky started out as a golfer, before dropping the clubs and becoming an acid house/techno DJ. His production and DJing career has taken off, topping the Beatport charts at #1 twice, first with ‘Funky Vodka’ in 2012, and again in 2013 with ‘What’s Up Suckaz.’ One of our all time favorite tracks from him of course is the ‘Ode to Oi’. Featuring his unique style he calls “bounce” you will be “bouncing” all set long. Oi! Oi!

James D’Agostino has been in the hip-hop game for a long time, making mix tapes since ’96. He’s produced tracks, shows, and mixes for many legends including the likes of Jay-Z, Nas, Eminem, Jadakiss and Ludacris. Currently based in Atlanta, he’s featured on the #1 radio station V-103, and still producing of course. DJ Green Lantern has been Shady Record’s official DJ, and even produced the entire Grand Theft Auto IV soundtrack. Boasting almost 20 years in the hip-hop game, we really look forward to getting down to this set.

For the readers in the Bay Area you might have heard of these two, San Francisco locals Chris Harnett and David Carvalho. Bringing a very unique style of house (electronic boogie music) to the table, this duo played at several major festivals including Insomniac’s Beyond Wonderland 2012, several Coachella appearances, and even Ultra 2013. Their newest released track ‘Haters Get Mad’ with Nima G has a deep house feel to it, something a little different for group, so give it a listen!

Last, but absolutely not least, Laidback Luke (or Lucas Cornelis van Scheppingen). If you haven’t caught this ex-grafitti artist/Kung Fu practicing DJ producer yet, you are in for a serious treat. Laidback Luke is a personal favorite ours, very few DJ’s bring same intense non-stop energy he delivers. Not only a top notch producer, Laidback Luke is one of the most talented DJ’s you will ever get to see live. Constantly utilizing every function of his CDJ’s, his mixing skills are absolutely out of this world. His most recent release ‘Collide’ with Project 46 and Collin Mcloughlin has been a huge hit, along with a new podcast series “Mixmash Radio” featuring his label Mixmash Records. If you’re not already a fan, you will be after this set.

We’re looking forward to seeing all of these artists this Sunday night, and expect our full recap next week of the show!