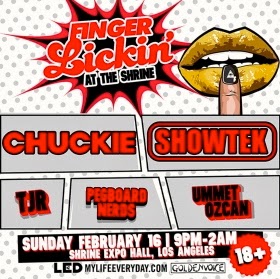 As the Valentines Day weekend comes to a conclusion, LED (the team behind events such as Tramps Like Us and OMFG! NYE) along with Goldenvoice returns to Los Angeles this Sunday in a jam-packed event set to make any electronic music lover fall in love all over again. LED never fails to bring an impressive line-up, and this year they did not disappoint. Alongside an amazing production setup we’ve witnessed over the past few events down at the Valley View Casino Center, the Shrine Expo Hall will be transformed into LED’s musical playground as their highly regarded vision comes back to the City of Angels packed full of lasers, CO2 and many surprises.

Headlining the event is the one and only “King of Dirty Dutch” Chuckie! Known for his ‘Dirty Dutch’ compositions as many would describe a mix of high lead syncs mixed with high energy deep-based rhythms; the many who have witness Chuckie never fail to mention how implausible his sets are along with the energy this man brings. If you’re looking to party DJ Chuckie is the go to man for it. Collaborating with such artists like Dzeko & Torres on “Down To This” and most recently Maiday on “Skydive”; Chuckie boosts an impressive track record with previous hits such as “Let The Bass Kick” and “What Happens In Vegas” all personal favorites which we look to hear during his set this weekend.

Joining alongside Chuckie is the one and only group: Showtek. This pair of Dutch brothers has come a long way from their beginnings in techno, transitioning to hardstyle, and now recognized for their electro and progressive house hits such as “Cannonball” and “Booyah” alongside We Are Loud & Sonny Wilson. Just as their latest single title “We Like To Party”, we’re expecting a lot of energy as Los Angeles music devotees and Showtek fans alike are excited to see the duo take the town by storm and show the world “How We Do”.

If you’ve been to an LED event you’ve probably seen TJR. From Connecticut originally, TJ Rozdilsky started out as a golfer, before dropping the clubs and becoming an acid house/techno DJ. His production and DJing career has taken off, topping the Beatport charts at #1 twice, first with ‘Funky Vodka’ in 2012, and again in 2013 with ‘What’s Up Suckaz.’ One of our all time favorite tracks from him of course is the ‘Ode to Oi’. Featuring his unique style he calls “bounce” you will be “bouncing” all set long. Oi! Oi!

The Scandinavian group Pegboard Nerds joins the Finger Lickin’ festivities this weekend along side their unique take on dubstep and trap while incorporating electro house and glitch hop into their sets; enchanting ears from far and wide. Tracks like “Razor Sharp” featuring Tristam and “Rocktronik” have gained popularity around the pair of producers; most recently their remix of “Lucid Dreams” by Mat Zo was heard embodied into a few DJ sets from Krewella to the Mat Zo himself. With their latest single (out on Monstercat Records) “Bassline Kickin”, we look forward to seeing Pegboard Nerds bring their slice to an already diverse line-up.

As what can only be described as one of the industry’s best concealed talents the one and only Ummet Ozcan rounds off the already striking line-up for the southern California edition of Finger Lickin’. Having worked with leading groups such as W&W on “The Code” and most recently Nervo and R3hab for “Revolution”; this multi-talented producer and DJ holds the title for working with other A-list producers such as Armin Van Buuren, Avicii, Tiesto, and most recently remixing Sander Van Doorn’s “Neon”. Ummet Ozcan’s sound which can be described as tech-trance mixed with electro house and unanticipated charges of energy, has seized the musical ears of producers and show-goers from around the globe.

We’re excited to see LED back in LA this weekend for what will sure be one hell of a party!