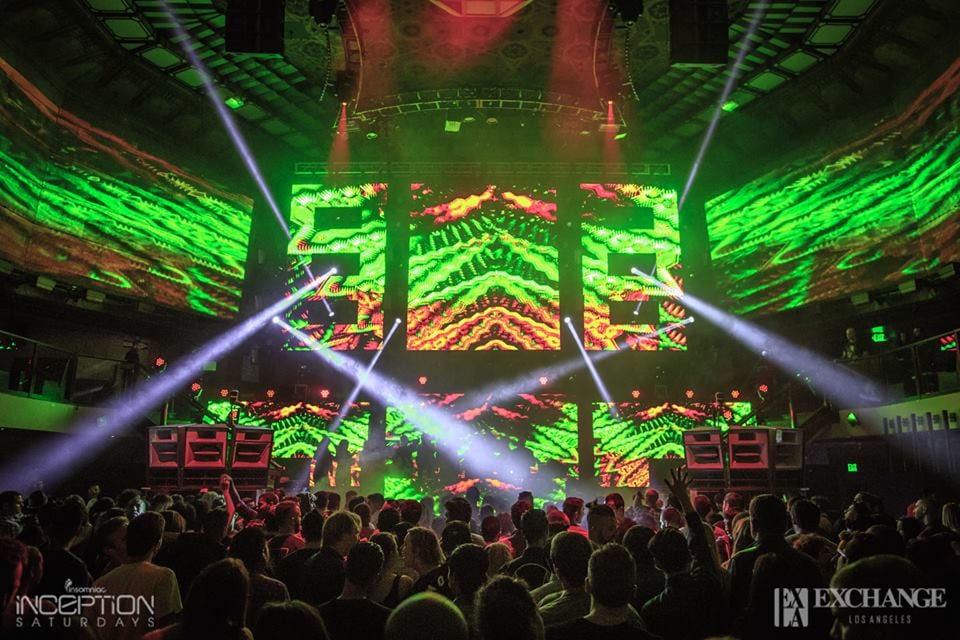 Los Angeles is the Hub of Electronic Dance Music, February Proves It

If you don’t live here, I’m sorry. I’m not trying to brag or anything, it’s just that Los Angeles has easily become the center for EDM music in the United States. Ibiza, London, New York, Miami, are all great in their own rights, but they pale in comparison to the constant quality and quantity of artists and DJs that line our busy streets and freeways. From the constant club events to the festival season that’s going to kick off in a week or two, if you want to go dancing on a weekend or even a weekday, there is a party waiting for you. It is the beginning of February, and if you take a look at the shows in or near the Los Angeles area this month, your jaw might drop to the floor. It is like looking at the EDC Las Vegas lineup already. From trap to trance, I’ll try to run down a few of the biggest events this month and why February in LA is going to be one for the books:

Exchange LA, my personal favorite club, has so much talent coming through its doors this month, I almost choked when I saw who was playing. If you like progressive trance music, I suggest checking out Andrew Rayel who is playing with KhoMha this Friday, 2/5 or Paul van Dyk who is playing an extended 4-hour set on Fri 2/12. I will personally see you at the Van Dyk show. If fun house beats are more your style, buy some tickets to go see SNBRN, Shaun Frank, and Dr. Fresch, this Saturday 2/6 or The Magician on Friday, 2/26. For all you bassheads, Hucci & G Jones will be playing Thursday 2/25, and the always fantastic Dash Berlin will be playing a special Sunday Valentine’s day set on 2/14; sounds like a great date night to me.

Create will make you jump this month with a fresh lineup that has the potential to be an amazing festival poster on its own. One of my favorite sets from Coachella last year, Matthew Koma is playing at the end of this week, with an absolutely insane Valentine’s day weekend lineup that includes tropical house giant, Kygo, the dutch brothers known as Showtek who are playing alongside Dubvision, Cedric Gervais, and a fitting end to the weekend with Afrojack. You can actually buy a three day pass to attend Friday to Sunday starting at $90. Start the festival season off right, I say. Laidback Luke, Trippy Turtle, and Henry Fong are also playing toward the end of this month, but my personal pick would be to go see Will Sparks this Friday 2/5. I’m a sucker for bounce.

There is a bunch of stuff going down at Avalon, like Le Youth on the 12th or Sick Individuals on the 20th, but I would go for the Markus Schulz open to close set at the end of the month. Extended sets are the way to go, and if you have the ability to catch this one, I guarantee you’ll be in for a treat.

If you’re going to Coachella this year, you can get a few previews at Sound Nightclub, with Lost Frequencies, Sasha, and Claptone all gracing the decks this month before they head off to Indio in April.

And those are just the clubs directly in LA or Hollywood! Don’t even get me started about Sutra in the OC or Heat in Anaheim. *cough W&W cough*

If you like hip-hop, then you probably already know this, but G-Eazy is performing two sold out shows next week at the Shrine Auditorium on the 9th and 10th.

If you want your face melted this month, I suggest heading over to the epic show that Snails is going to put on at The El Rey Theatre this Friday. Good luck hearing the next day.

The Fonda is hosting some big names this month with two sold out shows for Jauz this Thursday and Friday, Brillz & Party Favor are throwing their own massive with the Twonk di Nation tour on the 19th, and Keys n Krates finish off that weekend on the 20th with some live trap. And who doesn’t love live trap?

Eric Prydz is finally coming back to town and taking over The Hollywood Palladium for two nights on the 19th and 20th, bringing back his EPIC 4.0 music tour. I can’t wait for this one. Epic is tame to describe how this show will turn out.

Shaun White’s Air+Style is back in LA for its second year at exposition park at the LA Coliseum down by USC. Even if you don’t like sports, the festival doesn’t skimp on the EDM. Be sure to catch headliner Kaskade, or under cards Netsky and Gramatik.

Insomniac isn’t missing out on the February party either. They’re bringing back Crush SoCal for Valentine’s Day weekend on the 13th out in San Bernardino and thousands of ravers are going to flock out to see the likes of Wiwek, Tritonal, and Borgeous, just to name a few.

February is completely overloaded with events and I wouldn’t have it any other way. I’d attend as many as I could, if only my wallet would let me. I think a lot of us can share in that feeling. Too many shows, too little time. So if you’re bored this month, head on out to the city of angels and party all your problems away. And if this list interested you, I’d move as fast as possible. Just wait until March…