Following the MASSIVE success of his debut live tour with an all-new concept, Lost Frequencies brought together live vocals and instrumentation to create sold-out shows all over the world. Over 30,000 fans from New York to Amsterdam came together to experience the dazzling performance. Now, his live tour has been announced and set to be bigger and better than ever!

Coming off a year where tracks such as ‘Where Are You Now’ charted #1 with over 500 million streams and was awarded BBC Radio 1’s “Track of the Week,” while playing the mainstage at EDC Mexico to over 55,000 people, fans have a lot to look forward to in his live performance.

The tour kicks off October 6th with a four-show run in California before continuing the fun in Texas. He continues East, hitting Echostage in Washington and the iconic Terminal 5 in New York City, before making his way to Toronto’s Danforth and Montreal’s New City Gas to close out the North American run on October 29th.

Then it’s across the pond to Europe as the live tour zig-zags across the continent for 13 dates. From Lyon’s Le Transbordeur to Paris’s famed Olympia, Lost Frequencies will then return to headline the colossal Vorst Nationaal Arena, a venue close to his heart, as it’s based in his native Brussels. The magic was alive during his last performance there in 2019, and you can relive it in preparation for 2022 by checking it out on YouTube. He then returns to Amsterdam’s AFAS Live before playing at the massive Lotto Arena in Antwerp and then playing to tens of thousands of fans across Berlin, Munich, Hamburg, Cologne, Milan, and finally, a long-awaited return to London. Closing out in Poland’s Warsaw and Krakow on December 1st and 2nd, expect a tour that’ll be nothing short of amazing

Tickets are on sale now at lostfrequencies.com. 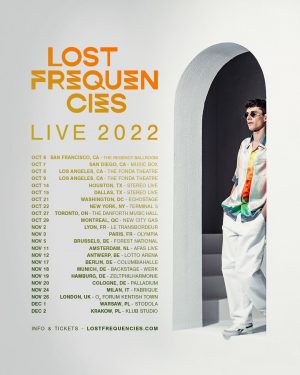