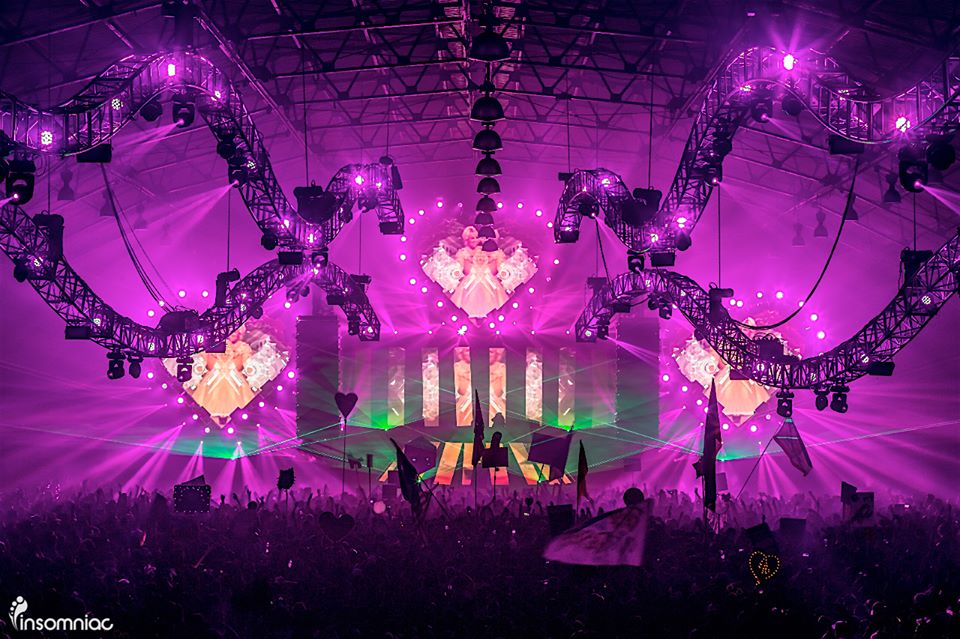 As the sun set on Valentine’s Day Eve, hundreds of ravers descended upon the Nos Event Center in San Bernardino for Insomniac’s annual love-infused party Crush SoCal. Pulling into the parking lot, it was easy to see that love was going to be a big theme for the night. Everyone walking in front of my car was dressed in red or pink. I wore grey. Go figure.

The event scheduled from 6pm-3am, it must be noted, is continuing Insomniac’s recent trend toward extending events later in the night here in Southern California following the successful event Dreamstate LA in November that ended at 3am as well. I knew that 3am meant a long night of music, but by the end, 3am didn’t seem nearly late enough.

The Damus Building at the event center, the same place they held Dreamstate or the Bass stage at Countdown, is the perfect one stage venue. An indoor space allows for the masses to keep warm if it gets cold at night, while the tables and heaters outside allow a nice break from the lasers and crashing cymbals. Coupled with the outside bars, food trucks, and the Crush photo opportunity right outside the main stage, Insomniac created a safe, fun, and intimate environment to host their Valentine’s Day party. Although, I do wish they had more tables outside. I also weirdly noticed asian-inspired lanterns strung about the water and merchandise area, perhaps an homage to the Chinese New Year that occurred a few days earlier.

It was clear from the moment you walked into the warehouse that Insomniac’s production value was as its highest level. The massive stage was a collection of large LED screens, highlighted by three gigantic LED hearts creating a triangle of shapes in the middle. One on top, two on bottom. The screens projected amazing flyovers of clouds, beautiful images of waterfalls, and of course hearts of all shapes and sizes. They mimicked the various DJ’s music styles who played and set the mood for the crowd. Wiwek‘s nintendo-style graphics are always my favorite.

The vibes were pretty good for most of the night with tons of heart-shaped kandi being traded, shuffling circles in the back and totems galore. I saw multiple instances of couple costumes like matching Minnie and Mickey t-shirts that kissed when they stood next to each other, a Superman and Wonder Woman duo, and I met a lovely couple in the crowd who were portraying Donald Trump and Hillary Clinton. They met at a rave and were celebrating their love by raving once again. Apart from an entrance line that took longer than usual and a few security guards taking away pairs from glovers, there wasn’t weren’t many problems with NOS Staff. Of course, having LED gloves taken away is a problem in itself, but one thing at a time. The party went off until 2am when the energy started to die down, but trust me when I say that those were still dancing until 3:00, were really very appreciative of the extra hour.

The music was fun and perfect for the event, but nothing mind-blowing either. I know just I’m jaded from attending so many events, but EDC Las Vegas will do that to you. It was just that I had seen the entire lineup once minus Tritonal, and I left thinking I had seen better from everybody I had seen before. The music choice was clearly influenced by the spirit of love from Valentine’s day and an event called “Crush”. Every song about love imaginable was remixed or added into a set from A&B’s We’re All We Need, Borgeous’ This Could Be Love, and Adele’s Hello, to a Whitney Houston sample and that hilarious 2 Live Crew song they always play that discusses what everybody wants. Everybody wanted “some” that night, trust me. Best set had to go to Wuki, who dropped several new tracks and had the best time slot since the crowd has the most energy right when they get there.

About halfway through the night I began wandering around the grounds to see how much the party had picked up since I went inside for the first time. The number of lovebirds raving had clearly picked up, evident by the enormous line for water. But Insomniac always has free water and that’s why we can’t complain. I met a couple in front of me who were carrying a rather large heart-shaped totem, fully fluorescent and flashing, with the names Tony and Nikki on it. They were one of the many couples that had decided to go raving together the day before Valentine’s Day and for them the atmosphere was great. For single people, not so much.

But that didn’t take away from the fun of the night. I met up with a few friends I knew from previous events and just like Insomniac, they always know how to party right.

The success of a multi-city event like Crush that also took place in Arizona, San Francisco, and Dallas, begs the question: Will Insomniac now up their game and start celebrating a bunch of different new holidays to capitalize on the EDM boom? Imagine next year Insomniac presenting “Ravedependence Day”, July 4th Weekend!

CRUSH was another awesome event by Insomniac and we look forward to seeing what their other events will be like this year.