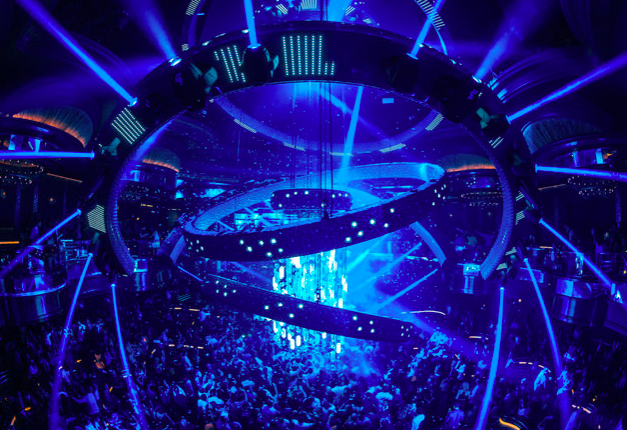 Memorial Day weekend has become the unofficial start to the summer. While being recognized as a day to remember our fallen heroes, many take on the extra added day to enjoy and live out the Monday away from work and/or school. Las Vegas, NV has become a prime destination for both partiers and gamblers alike. A city that holds the “Sin City” nickname, the most common catchphrase “what happens in Vegas, stays in Vegas” can be heard in any conversation with anyone who has had a chance to endure a rebellious weekend in the infamous sin city.

This past Memorial Day weekend, the EDM Maniac team ventured off to Las Vegas as a miniature getaway from our daily routines. It is no surprise however that once we set foot in Vegas; the weekend was going to be one to remember.

On Friday (5/22) we ventured off to the latest club to hit the Las Vegas Strip, Omnia Nightclub located at the Caesars Palace Hotel. Being the newest venue on the Strip, the crowd turnout for the one and only Armin Van Buuren was in full swing. With a line that expanded well off into the casino gaming area of the hotel, we realized right away that it was going to be one night that we would not forget. Omnia fits approximately between 3500-4000 people, as with most Vegas clubs, the crowding can be an inconvenience however maneuvering around the venue was simple enough.

A giant chandelier surrounded by multi-level interactive rings is one of the many highlights of this glorious venue. Expect no less in terms of production value and sound with a system that can be heard well throughout the club. The club layout features a main dance floor, a second floor balcony with bottle service tables giving you a view into the crowd below, and an outdoor patio with one of the most amazing views of the Las Vegas strip. As for beverage pricing, it’s Vegas; expect your typical beverage costing between $10-$20 and bottle service ranging in various pricing according to your bottle choice.

Armin Van Buuren was the main headliner for the evening which was a pleasant musical icon to witness. We had the honor of sitting down with Armin earlier in the day for a one on one interview which we can only say was a true highlight of the weekend. Incorporating some of the audience questions, we were able to connect with Armin on a much more personal level.

Omnia can truly be considered one of the few clubs that is changing the Las Vegas nightlife experience not just on visual production, sound, and layout but by the talent residences that are being presented daily from Armin Van Buuren to Martin Garrix.

A huge thank you to the staff at Omnia, Armin Van Buuren, and his team for making our evening experience one that we will not forget anytime soon.

As a close to the Memorial Day weekend, on Sunday (5/24) the EDM Maniac team decided it was only right if the one and only Tiesto had the honors of making the perfect ending of an already memorable fun-filled weekend in Las Vegas. Lucky for many others and ourselves, the Club Life king was set to play a set at none other than at Hakkasan Nightclub, located at the MGM Grand Casino and Hotel.

Hakkassan Nightclub was opened up to the public back in 2013 and over the course of the past two years, has hosted some of the biggest world-renown DJs within its majestic doors. Capping at around 7,500 patrons within 80,000 sq ft., this five-story venue holds a world within itself.

While the venue layout can be a bit confusing and torturous (for the girls wearing heels) having to climb about five flights of stairs to get to the main dance floor can be quite the challenge. Along with a main dance floor, Hakkasan features a restaurant and a mellower club below its main dance floor known as ‘The Ling Ling Room’.

While the club does cater to a more favorable lavish clientele with it’s higher than average price points, the experience in itself is different. A 2nd story balcony surrounded by bottle service tables gives the attendees various point of views into the main dance floor crowd and artist stationed at the booth.

Tiesto had the honor of showcasing this residency to a very welcoming crowd that completely brought the energy in every form imaginable. Playing through his various hits such as “Secrets”, “For You”, and his remix of 3LAU’s hit “Bang”, who happened to make a guest appearance alongside Tiesto. We got a personal showcase of his latest album release “Club Life, Vol. 4 – New York City” which can be described as a club anthem within itself.

As the night carried on we witnessed that wherever you looked, everyone was having the time of their lives. We must point out thought that the crowding in the venue itself can be a bit overwhelming especially on the dance floor.

Nonetheless Hakkasan has made its presence known on the Las Vegas strip bringing in some of the highest paid DJs in the world including Hardwell, Calvin Harris, and many more. It was pleasure once again witnessing what Hakkasan has to offer thanks to the staff, Tiesto and his team, and everyone who joined us to close off the Memorial Day weekend.