Armin van Buuren has a reputation for creating powerful, inspiring tracks that pulls his listeners in. His 6th full-length studio album Embrace (via Armada) is no different, offering a variety of musical style that reassures us of his Grammy-nominated skill set. Today, MTV is hosting the world premiere of Armin’s music video for the new single “Heading Up High” off the Embrace album. It’s an incredible anthem that boasts vocals from Dutch rock band Kensington, and the video only amplifies it’s raw energy. “There is a magical space where electronic dance music meets monster rock ‘n roll and Van Buuren and Kensington were able to find that phenomenal place,” said EDM publicist Emily Tan in the press release. How right she is! The collaboration between the artists came together so seamlessly, but not as too much of a surprise. Kensington’s latest album Rivals (via Universal) premiered at the top of the charts in the Netherlands. “I wanted to create a song that was just totally unexpected and I’d been drawn to the sound of Kensington for some time,” explains Armin of his new single. “It just really soars and I get a great reaction whenever I play it out! It’s got the feel of worlds coming together.” 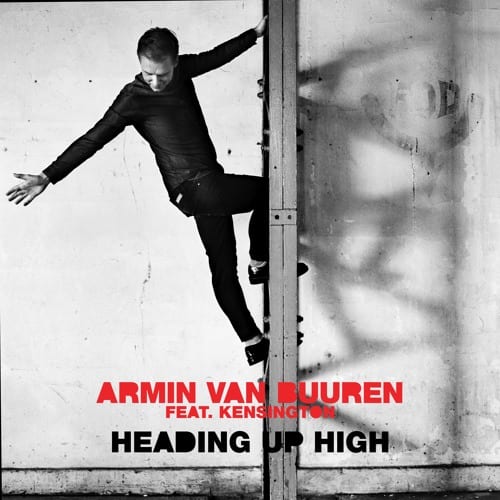 In the video, the track’s title takes on a literal meaning as a group of inmates attempt to escape a dome-shaped prison by climbing a rope to an exit “up high.” If you pay close attention to the video, you’ll also notice one of the inmates has a familiar face! It’s a cameo by none other than EDM’s very own Hardwell as he struggles to get to the top amongst all the others. The music video is available for an exclusive 24 hour streaming today via MTV here, or check it out below: