How Music Festivals Bring Out The Love In People

There’s something about music festivals that really bring out the love and compassion for humanity in other people. It’s beautiful how thousands of like-minded people gather together to enjoy the beauty of someone else’s art. Every year more and more people are introduced to the festival culture. For some of those people, that one festival can change their whole perspective on life and change them forever.

Everyone will always have their opinions on which festival is best to start off with. Some say that EDC is a great one, while others insist that Electric Forest has the best vibes. No matter what festival you go to there always seem to be a lot of people looking out for one another. Whether you need a lighter, some water, a bite to eat, or a hug from a friendly soul, there is always someone who has your back. The love for others that is shown to new time festival goers is what makes some of them fall in love with scene.

I recently met a young couple, Dylan and Randi, while walking around on Fremont St. in downtown Las Vegas right before EDC. I noticed their kandi and started a conversation with them. After talking with them for a few minutes, they invite me and my group up to their room to have a beer. We graciously accepted their offer, and followed them upstairs.

Once we got into their room they immediately started showing us all of their kandi that they had brought. They had brought 3 duffle bags filled to the top with kandi to give away, and even more bags of kandi making supplies. They had hundreds, if not thousands, of singles and necklaces to give out. So in my head I’m thinking ‘These must be professional ravers.’ Finally I asked them how many festivals they had been to, and their answer absolutely shocked me. 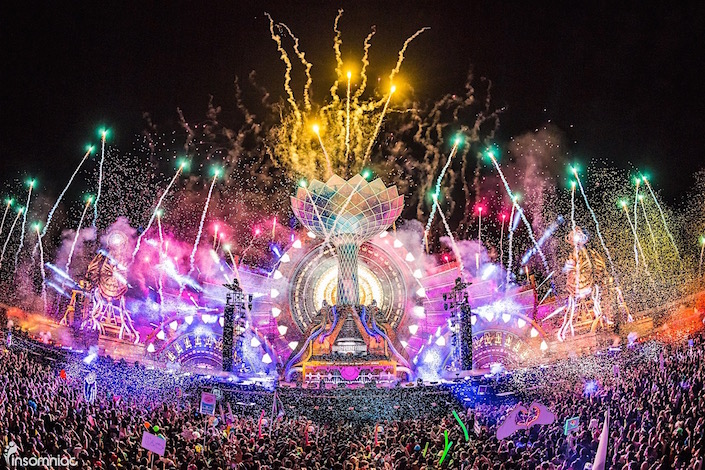 They told me that EDC 2016 was their first and only rave ever! They went on to explain that they went to their first EDC and absolutely fell in love with the whole culture. After watching all the promo videos of EDC online, they were a little disappointed to see so little kandi in 2016. So they decided to bring PLURR to as many people as possible this year. They said, “If we can just help one person have a good experience like we did our first time… Then it’ll all be worth it.”

They spent months and months gearing up for EDC 2017. Over the next several months they made as much kandi as possible. They even made up kandi kits to give away with beads, various cords, glue, and anything else you might need for an emergency kandi sesh. Then they start showing us all the other stuff they had brought with them to give away. They had bought cases of LED mouth guards, thousands and thousands of glow sticks, 20 cooling towels, fans that plug into your phone, 500 pairs of paper diffraction glasses, ear plugs, LED light up glasses, LED finger lights, Chap Stick, gum, and many other rave essentials. All to give away to people at the festival!

This couple had some of the most amazing vibes I have ever seen. They soon earned the nickname ‘The Givers’ amongst my rave fam because of their exuberant nature. Their friendly demeanor and their bright outlook made them easy to be friends with. As I got to know more about them, I learned that they come from a very rough area in a small town on the border of Arizona and Mexico. They have always been apprehensive of strangers until they attended their first EDC the year prior. After that experience, they decided to rise above all the negativity that they were surrounded with. They decided that they would be the ambassadors of Love and Peace to everyone they came across. 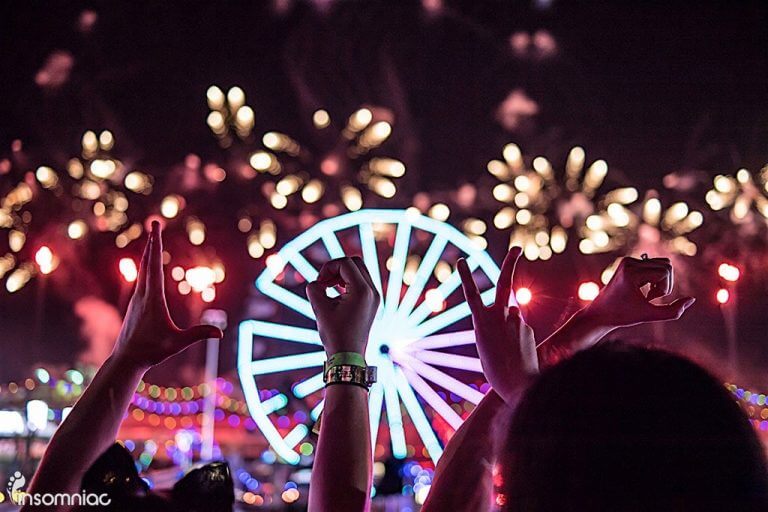 We instantly became the best of friends. I took them to all of the meet ups I had in Vegas so they could meet all my fam from all over the world. I helped them get into their first club at Omnia Nightclub at Caesar’s Palace on my staff guest list. In fact there wasn’t a single day that we didn’t hang out!

This year I was not able to get a ticket to EDC due to financial restrictions. I wasn’t upset about it because at least I got to go to Vegas and see all of my fam, which is the only reason I go to festivals to begin with. Instead I decided to spend more quality time with my local friends that live in Las Vegas. On the last day of EDC Dylan and Randi approach me while we are all hanging out. They tell me that there is no way that I can miss all three days of EDC. My jaw dropped to the floor as they hit me with the news that they were going to buy me a ticket to the last day so they could rage with me.

I hurried up and got changed into some suitable rave attire. We drove up to the Speedway to try and find a single day ticket. We were shocked to learn from the EDC box office that they were not selling single day tickets this year. If I wanted to go we would have to buy a 3-day pass at the full price of $450! As a last resort we started to look around for scalpers. After searching for a little while, we weren’t able to find any scalpers. As I’m saying my goodbyes to my new friends through the gate, someone runs up to us from inside the gate and asks if we needed a wristband. It was as if the Universe had answered our prayers!

As I walked into EDC filled with gratitude and pure joy, I started to cry. I was finally back home, and it was by the grace of someone I had just met. With tears in my eyes I gave them the biggest hug I could and thanked them from the bottom of my heart. We ran around exploring everything that EDC had to offer. It was nice to show the newbie ravers how an experienced raver does some things like getting the front and center of large crowds. They continued to surprise me as they showed pure love and compassion for everyone they came across. Anytime they saw someone with no kandi they would give them a handful to trade off. If they saw someone sitting on the ground trying to cool off, they would offer a cold bottle of water and a cooling towel for them to keep. This couple was the epitome of PLURR. 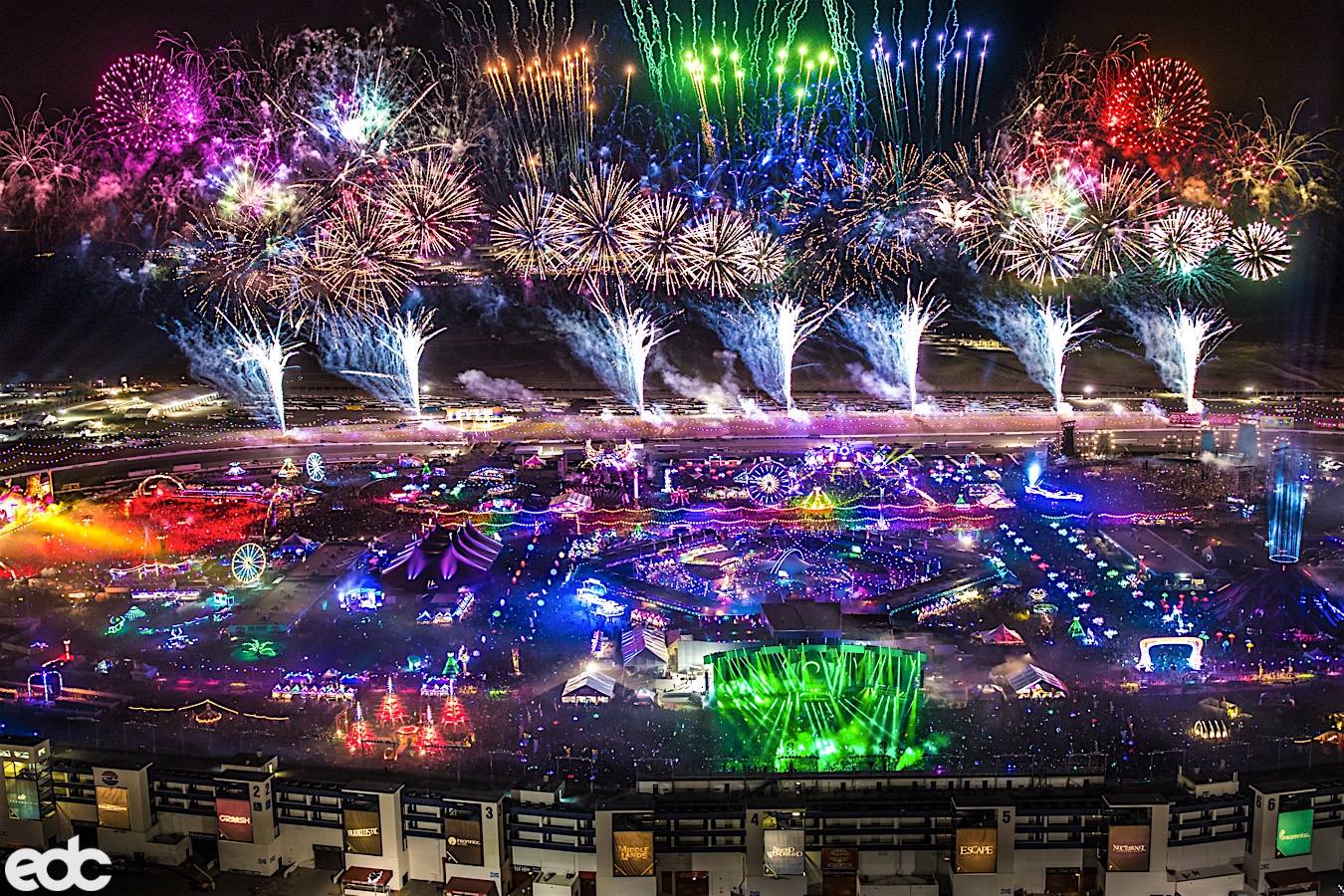 The love that these new ravers were showing to everyone, even complete strangers, warmed my heart to no end. I continued to hang out with them until I had to fly out to Chicago. In those couple of days, I watched as they continued to win and win at every single casino they went to. I commented one time on how lucky they were and they replied, “It’s not luck. It’s the love we share. The more love we give to other people, the more love the Universe gives back to us.” They went on to tell me that for they had made more money from the casinos than they had spent for their whole trip. Even with their VIP tickets!

As we were saying our goodbyes at the airport terminal, I realized that this is what music festivals are all about. The connections you make. It’s the strangers that become friends for life. It is about the LOVE you share. So go out and share all the love you can. You will be surprised at the amount of love the Universe gives back to you…

Troyboi Talks About His New Album & His Upcoming Tour