It’s Not Too Late! 4 Reasons Why You Should Voyage to High Caliber 2018

Festival season has finally begun to wind down as most of us begin to pack away our camping gear, rave clothes and accessories until next year. BUT it’s not over quite yet! For those of you who are looking to end this festival season with a bang, you NEED TO be at High Caliber Music Festival.

High Caliber will take place this Saturday, September 29 on the docks of the Deleware River in Cambden, New Jersey. A short drive from most major cities on the east coast and a couple in the Midwest, the one-day festival features 28 artists on three stages on the grounds and decks of a decommissioned U.S. Navy Battleship.

Surprisingly, tickets are still available for this festival! Here are four reasons why you should snag yours ASAP and make your way to Cambden this weekend… 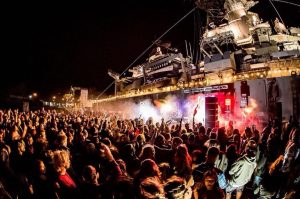 What makes High Caliber so unique is that it’s the only one of it’s kind in the entire world. The festival is held aboard The New Jersey (BB-62), a decommissioned Navy Battleship. During its almost 50 years on the waters, the ship earned battle stars in World War II, the Korean Conflict, Vietnam, service prior to Desert Storm and several other service missions. The ship is our country’s most decorated battleship and surviving warship.

SO, needless to say, it is one of the dopest ideas ever to bring some of the heaviest names in bass music aboard one of the most valiant ships in the world. That being said…

2. The lineup is absolutely insane.

The lineup is what initially drew me to this festival. Then I found out where it was held and it was game over from there man.

The High Caliber headliner game is strong; bringing in a couple of the greatest names from the UK to the states to rock the waters of the Delaware River. Capsa, the notorious UK grime dubstep master is set to take hold of the Head Quarters (stage) as the second to last set of the night. Cookie Monsta and Funtcase are scheduled to bring an epic B2B set to close out Head Quarters.

Listen, I have seen both of them play at other festivals this summer and I am not playin around when I say these are two sets you do not want to miss. Caspa’s set at Big Dub Festival was a mind-melting masterpiece of some of the filthiest wubs I have heard in a minute. Cookie and Funtcase absolutely murdered the Prehistoric Paradox stage on the final night of Lost Lands; doubling today’s heaters with a couple of their own classics like ‘Scary, Yikes, Grrz’ and ‘Ginger Pubes.’ I can’t wait to see what these three have in store for High Caliber; but I bet you it will be EPIC.

The Brooklyn-based Gravedancer Agency has a heavy presence on the High Caliber lineup. Their riddim/dubstep producers have been gaining major traction in the industry over the past year, popping up on festival lineups and news feeds all over the country. Bandlez, Blunts & Blondes and Subtronics will bring their savage sound design to the Head Quarters stage on Saturday. Xaebor and HE$H are set to take over the Bunker with a belligerent B2B set in the late afternoon. While the untamable Al Ross is scheduled to bring the noise to the Armory on Saturday night.

Freeform bass music is also prominent on the High Caliber roster. WAKAAN producers Digital Ethos and Luzcid are set to bring their otherworldly stylings to Head Quarter. Eprom is scheduled to take over Head Quarters with his booming bass tunes right before the headliners.

Two artists that really push the boundaries with their abilities, DMVU and Dirt Monkey, will bring their sounds to the Bunker and the Armory.

Sound pretty dope? Yeah, that’s only HALF the lineup. Unlocked Presents packed SO much filthy bass goodness into one night it should be a goddamn crime. And the artists and music themselves are just the beginning… 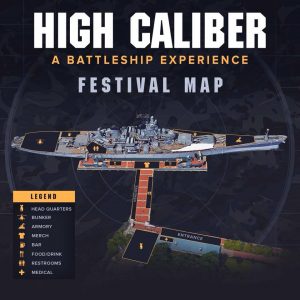 3. The atmosphere, sound and sights.

As if one of the coolest venues and the stacked lineup wasn’t enough, High Caliber has really stepped up their game in the festival’s second year. This year’s event will feature a new layout for the venue. The Head Quarters stage will be located right off of the ship while the Armory and Bunker stages will bring the decks of The New Jersey to life. Festival organizers are bringing top-notch pk sound to two of the three stages at High Caliber. Philadelphia based VJ, DR01D VISUALS, will be packing an arsenal of custom visuals to light up the main stage. 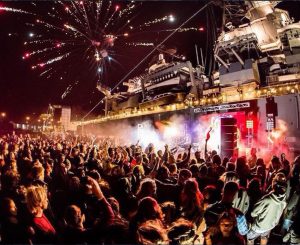 4. Unlocked Presents knows how to do the damn thing.

The event curator for High Caliber, Unlocked Presents, is the premier name in EDM events in the Philadelphia area and beyond. They have worked tirelessly to expand the dubstep scene in the area, putting on dozens of events and bringing some of the top names of the industry to the city over the past year. High Caliber is the brainchild of the group’s organizers and the event has received national recognition since its inception last year. Bottom line is: these guys know what they’re doing. They pour their hearts and souls into these events which is probably why they are dope AF and as successful as they are.

This one-day festival is one you can absolutely NOT miss! Tickets are still on sale but are already 90 percent sold out! Grab yours while you still can, and I’ll see you all on board the New Jersey this weekend! Bon Voyage headbangers!

Here Are The 5 Best Ways (We Think!) To Recover From A Festival