This past weekend, Okeechobee Music + Art Festival celebrated it’s inaugural year as a new edition to the growing list of music events popping up around the world. For any first year festival, there is usually quite a bit of mystery and skepticism around what attendees can expect. Promotions give some perspective and build up anticipation, but you truly never know until you’re finally there to experience it. I was fortunate enough to attend Okeechobee’s debut and absorb all that the rookie event had to offer!

THE MUSIC
There truly was something for everyone. With an eclectic lineup that featured everything from old school rock legends to EDM icons, not one genre seemed to be left out. The 3 main stages within the festival itself featured various headliners, as well as several areas outside the main festival that showcased more underground and abstract artistry.

The actual festival’s full lineup boasted the talents of respected newer age rock artists like Grace Potter and Mumford & Sons, as well as veterans like Robert Plant (Led Zepplin), Ween and the timeless sounds of duo Daryl Hall & John Oates. Hip-Hop also had a heavy presence with several bigger artists appearing like Grammy-winner Kendrick Lamar, Joey Bada$$, Future, Post Malone, Big Grams and even Lil Dicky. Mac Miller delivered as well, at one point taking aim at Donald Trump before performing his 2011 track named after the Republican presidential candidate. EDM certainly wasn’t left out either with Bassnectar blowing it up as usual, along with great sets from RL Grime, Lotus, Bonobo, Gramatik, Big Gigantic, Odesza, Skrillex and Kill The Noise who was forced to reschedule for the next day due to transportation trouble.

Probably one of the most exclusive musical moments of the fest came with the PoWoW! SuperJam that featured artists like Miguel, Win Butler of Arcade Fire, John Oates, George Porter Jr. and Zigaboo Modeliste of The Meters, Kamasi Washington, Preservation Hall Jazz Band, Eric Krasno and Neal Evans of Soulive, Chris Karns, and special guests like Mac Miller and Skrillex, who ran from his outstanding DJ set at one stage to the SuperJam lending his guitar talents (pictured below). The special set was an amazing compilation of old hits like Earth Wind & Fire‘s “Let’s Groove,” Michael Jackson‘s “Don’t Stop Til You Get Enough,” and even a tribute to the late David Bowie with “Fame.” 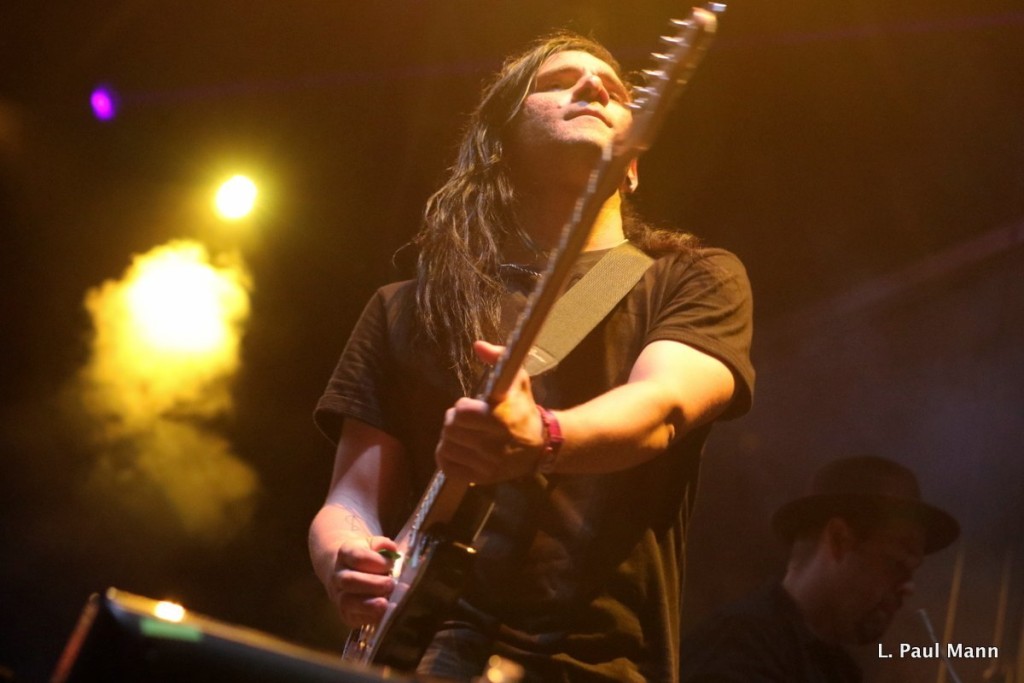 THE PEOPLE
Prior to arrival, many ticket holders were skeptical of Okeechobee being an all-ages event. Which is understandable, considering the scrutiny other festivals have gotten in the past surrounding an absence of age restrictions. However, at Okeechobee, attendees seemed to embrace the diversity of generations. At one point, my group of friends and I couldn’t help but notice an older woman who stood out from the rest of the crowd. Sporting a Bernie Sanders tee, a long floral skirt, and Birkenstock sandals, she hurried over to a younger female raver to exchange kandi as a sign of peace and love. She was just one of many examples of how oblivious music is to age and appearance.

Aside from age differentiation, there was also significant diversity in other aspects as well. Several flags of different countries and states were proudly flown above campsites and as totems, and many attendees made it a point to show college pride with university logos and banners as well. Festival fashion also continued to turn the eye of many, as there was no shortage of individuality and creativity in attire. From homemade headpieces to cultural camisoles, there was an awesome array of colors, patterns and accessories.

Whether you’re a self-proclaimed modern day hippie, a hip-hop enthusiast or a classic rock headbanger, there’s a place for you to feel welcome at Okeechobee Music + Art Festival. 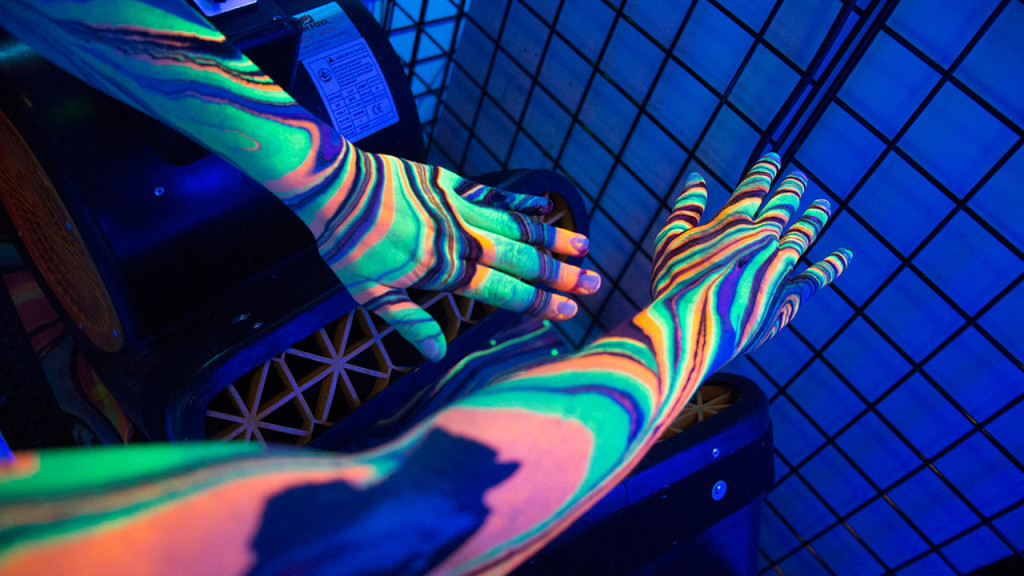 THE CREATIVITY
Being a “Music + Art” festival, Okeechobee also provided a surreal showcase of installment art and creative concepts. Along with the unique decor of the entire festival, select specific areas featured artistic displays formed from recycled materials. Several gatherings were focused around the creative installments, including a random stage in Chobeewobee Village that featured hanging tin cans that vibrated with the sound of music. Another Chobeewobee piece that stood out was the flaming figure ride that required a group effort to ignite the structure.

There was also quite a presence of vendors from around the country. Black Light Visuals, a Michigan-based clothing company, offers incredibly unique painted pieces for festival goers and body painting techniques. Another vendor, There You Glow, offers UV interactive artwork apparel that features a science allowing consumers to play with their glow in the dark product. As I spoke with representatives of the brands, I was able to grasp their appreciation for such an awesome opportunity to promote their products. With so much reach, a festival like Okeechobee is truly the best platform to get your name out to the public. 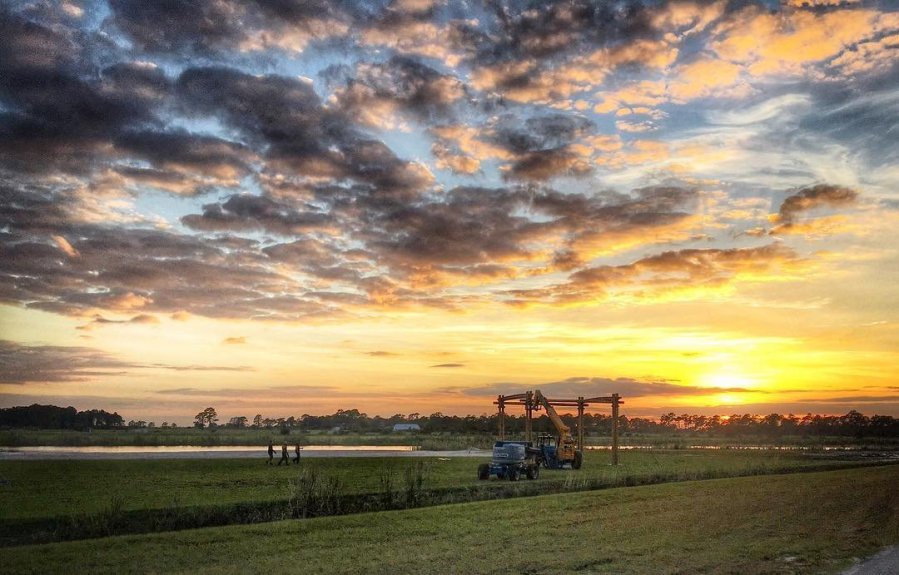 THE LOCATION
Surrounded by Florida’s sprawling natural scenery of wetlands, live oak trees and palms, the location couldn’t have been better. If you’re familiar with Florida weather at all, you probably know that any period of time without rainfall is rare. Luckily, Okeechobee attendees were treated to an exclusive 4 day stretch of sunshine and cool nights that made camping both tolerable and comfortable. Campers were allowed to set up aside their vehicles, which made the entire process a lot easier in comparison to TomorrowWorld where camping attendees were forced to walk a considerable distance before setting up their site. In addition, the general layout of the festival was ideal with camping areas basically open to the jurisdiction of attendees and a clear separation of festivities and camping. Aside from a lack of reception for most cellular service networks, Sunshine Grove felt like best possible place to provide serenity and safety for thousands.

WHAT COULD HAVE BEEN DONE DIFFERENTLY

STAGES – The festival itself offered 3 main stages, labeled “Be,” “Here” and “Now.” The ongoing joke amongst attendees became the Abbott & Costello confusion around the deceiving stage names. Perhaps next year the stages could have a bit more clearer differentiation in names, as well as maybe more focus on particular genres rather than scattering acts across the 3. Other attendees also suggested offering more space between the stages, as there was some overlap of sound during sets. Also, there were numerous times of transition where no music was playing at all, which was quite frustrating for those not looking to sit in silence.

SECURITY – Depending on who you ask, you’ll probably get a different answer. Security differed from time to time and from staff member to staff member. According to a local Undersheriff, a total of 70 non-locals were apprehended during the event, most of which were caught trying to smuggle contraband into the campgrounds. The process to get into the campgrounds seemed legitimate, however getting into the festival area itself was a joke. And while some may prefer to see less security for their own benefit, I personally find comfort in knowing measures to keep everyone safe from violence is consistent.

NAVIGATION – There was also a bit of confusion surrounding the labeling of campgrounds and what areas were where, as well as water refill stations that were randomly placed around the grounds. Hopefully next year will provide a bit more specification and direction for attendees to navigate the grounds, simply to make meet ups and planning easier for all.

Close to 35,000 people funneled into the festival over the weekend for a spiritual connection with music, art and fellow festival goers. Overall, it was a genuine success. Aside from some disorganization expected in a festival’s first year, Okeechobee Music + Art Festival delivered what many are assuming will become a new tradition for the North American music festival circuit!