Q-Dance Announces The Sound of Q-Dance with Brennan Heart, Frontliner, and more.

Attention Southern California Hardstyle fans! The Dutch company Q-Dance will make it’s return to  Los Angeles at the Shrine Auditorium and Expo Hall on March 8th with Brennan Heart, Lady Faith, Frontliner, Mr. Skeleton, Sylence, The Prophet, and MC Villain! For those that aren’t familiar, Q-Dance is a Dutch company that organizes events and festivals that focuses on the harder styles of dance music like Hardcore, Hardstyle, Dubstyle, Techno and Hardhouse. 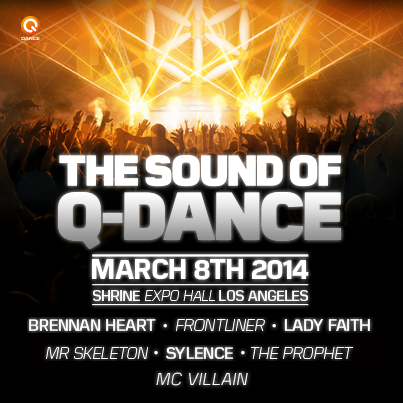 We were very lucky enough to travel side by side with Q-Dance last summer to the first ever TomorrowWorld, and we were absolutely blown away with their over the top production, which included massive amounts of lasers and lights that could capture anyone’s attention. There’s something to be said about Q-Dance events: they bring out of this world production coupled with a diverse lineup of hard dance and hardstyle artists. This fusion of both stellar production and diversity of their talent make for a truly unforgettable experience, and something that we are very much looking forward to seeing again on March 8th.

Buy tickets to the Sound of Q-Dance here

However, this isn’t the first time Q-Dance will touch down in Los Angeles. Just last October, Q-Dance took over the Shrine Expo Hall for the first time with Gunz for Hire, Coone, Noisecontrollers, Psyko Punkz and a few more. It was definitely one of the most iconic and memorable events to come to Los Angeles last year, and they upheld a standard of production value that Q-Ddance knows how to create. Q-Dance has also been credited with the growing hardstyle genre, and the success of wildly popular artists like Headhunterz and Wildtylez.

We’re really looking forward to seeing Q-Dance blow us away in March as they transform the Shrine Auditorium and Expo Hall as only Q-Dance knows how to!

Lady Faith is one of hardstyle’s biggest female acts and she heralds from our own backyard, LA. She fell in love with hard house as a 15 yr old and was a bedroom DJ until she was spotted playing in LA’s iconic Groove Rider record store. Since then her productions have topped hardstyle charts and she’s played at hardstyle meccas live Defqon.1 A powerful presence on-stage who often drops in live vocals, her most recent release on Hard Dance Nation “Queen Bitch Of The Universe” is not to be missed!

Frontliner is one of hardstyle’s leading lights, the Dutch master, known as the Melody Man, has huge tracks like ‘Symbols, ‘Spacer’ and ‘Lose The Style’ under his belt. He was recently invited by Armin van Buuren to provide the only hardstyle remix in his 10 Years of Armada Anniversary EP series. Regularly opening his studio to fans via webcam, Frontliner is one of the most versatile producers in hardstyle, little wonder he’s a frequent collaborator with icons like Headhunterz, Wildstylez, and the equally fast rising Adaro. In 2013 Frontliner crashed the DJ Mag top 40 and his 2014 looks set to be even bigger.

Sylence is a Q-dance success story. Just 20 years old and living in South Dakota, he entered the Qontest in 2013, winning a guest DJ slot at TomorrowWorld and on Q-dance’s iHeartRadio show ‘Q-dance Presents’. Fast forward six months and Sylence has a forthcoming EP release on Q-dance Records and will be playing LA’s Sound of Q-dance. Sylence’s success is indicative of how Q-dance nurtures and develops young acts, and how North America is producing its own generation of hardstyle talent.

Brennan Heart is a true hardstyle champion. A household name in the world of Hardstyle, he has been a producer for over fourteen years now and his qualities have been rewarded with position #49 in latest DJ Mag Top 100. Heart is immersed in the history of Hardstyle, but has always been a pioneer, bringing innovation to hard dance music, consistently experimenting, and driving the spectrum of hardstyle forward. In late 2013 he released the documentary ‘Evolution Of Style’, after cameras had followed him for 18 months, not to be missed, it’s an unflinching glimpse into what the hardstyle life means to artists and fans alike.

The Prophet is the man behind Scantraxx, the world’s most influential hardstyle label. For over 25 years he has brought the sounds of hard dance to all corners of the world, helping to launch the careers of Wildstylez and Headhunterz, while being a key figure in the rise of Dutch dance music of all genres. A true statesman of dance, The Prophet seems to have an uncanny knack for knowing what’s next.