The numbers are in: Insomniac Sells 20,000 Initial EDC Las Vegas 2014 Tickets in Minutes

Shortly after EDC Las Vegas 2014 tickets went on sale today at 12 PST, CEO of Insomniac, Pasquale Rotella confirmed via Twitter that 20,000 tickets were sold at the $249 (tier 1) price point. These tickets were sold out in less than a few minutes. Tier 2 are currently sold out and tier 3 tickets are now available.  More numbers about today’s presale will follow. 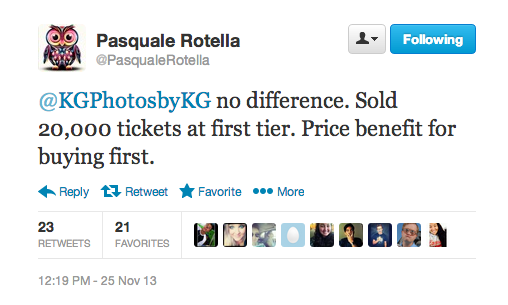 Las Vegas – The first allotment of tickets for the 18th annual Electric Daisy Carnival (EDC), Las Vegas go on sale today at 12 p.m. PST through the brand new Headliner Loyalty Program. EDC, Las Vegas will once again return to the Las Vegas Motor Speedway on June 20, 21, and 22, for a three-night celebration of art and music filled with over the top production and creative elements.

The newly launched Headliner Loyalty Program gives fans that have successfully purchased tickets for EDC, Las Vegas in 2011, 2012 or 2013 the chance to buy three-day general admission and VIP passes before the general public by using a unique pre-sale code.

Valid for 24 hours, the Headliner Loyalty Program pre-sale will close on Tuesday, Nov. 26 at 12 p.m. PST. Ticket sales will resume with the Early Owl pre-sale beginning on Monday, Dec. 2 at 12 p.m. PST.

Tickets will start at $249 for general admission and $499 for VIP tickets for those 21 and over, in addition to service fees. VIP amenities will include a separate entrance to the festival for rapid entry, viewing decks overlooking multiple stages, full cash bars located on the VIP decks and lounge areas, separate restroom facilities, access to exclusive areas, a VIP lanyard and badge and a dedicated Ferris wheel. A layaway pricing option will be available for all on-sale dates. Single day tickets will not be available for this three-day experience.

The official EDC Week will return to Las Vegas from June 17-23 for an entire week of nightclub and dayclub events spread across several Las Vegas venues. EDC Week events will include the third annual EDMbiz music conference and the premiere of a brand new dance music awards show with other special surprises.

Information on shuttle passes, travel packages and details regarding the full EDC Week schedule of events will be announced in the coming months at www.electricdaisycarnival.com and www.insomniac.com.