Ultra Brasil returns to Rio de Janeiro on October 12-14, 2017 for its second edition and for the first time as a three day event.

They just released their Phase One lineup of artists, which include Alesso, Armin Van Buuren, and David Guetta. The RESISTANCE stage will include artists Adam Beyer, Jamie Jones, Joseph Capriati, The Martinez Brothers, and Sasha & John Digweed.

Alongside the Phase One reveal, they announced unique travel packages featuring flight bundles, hotel deals and in-festival transportation. Cashless funding will return once again where festival-goers can preload money onto their account to use for their purchases at the festival. Cashless funding will be available from May 9 until October 10, 2017.

In addition, ULTRA Worldwide’s global customer loyalty program, ULTRA Passport, has now been launched in Brasil. The program allows people to earn points and to progress their passport level for other festivals.

For more information about ULTRA Brasil head over to UltraBrasil.com. 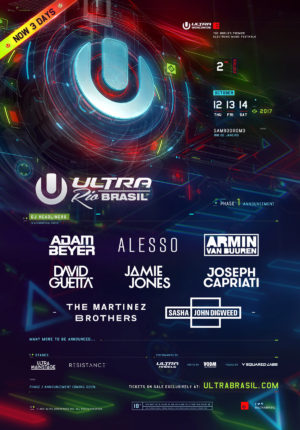 10 Things We Love On The EDC Vegas Lineup