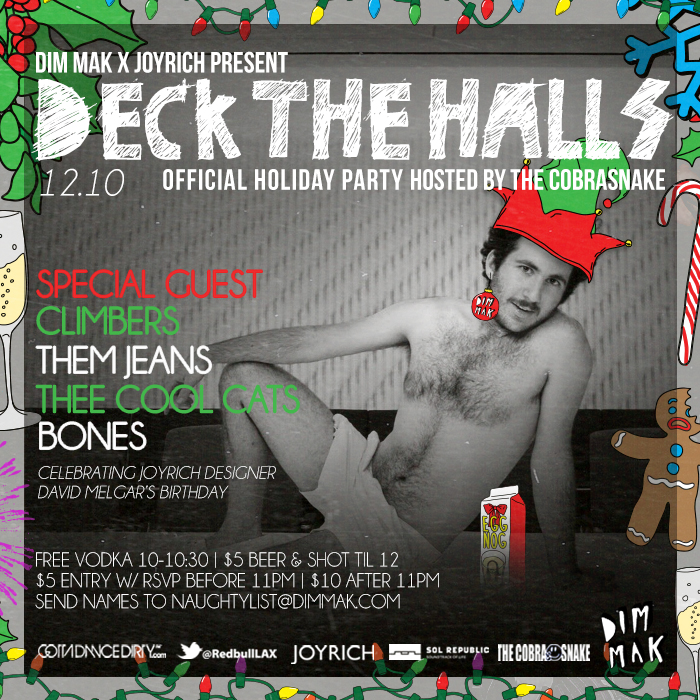 Note: this article is about the event on 12/10 and does not reflect our overall experiences at Dim Mak Studios.

Yesterday night, the EDM Maniac team was invited to Dim Mak’s annual holiday party in Hollywood. It was hosted by Cobrasnake, with performances by CLimbers, Them Jeans, Bones and more.

We arrived to the venue and headed to press/VIP line and waited till about 10:30 in the cold to get in (doors were supposed to open at 10, and there was no communication to either the press/media lines or the ticket holders). The line slowly started moving and when we got to the front we picked up our wristbands, and were told we “needed to get a red wristband” in order to get the open bar which was supposed to be offered to all members of the press.

Around 10:45PM we noticed the club was still relatively empty, which was strange because there were tons of people who RSVP’d and purchased tickets on the other line outside of the club. We went down to investigate and saw that the line did not move for any of the fans that were in line. The show was advertised as being $5 for fans that RSVP’d and got in line before 11pm. We noticed that once 11 O’clock came, and the line still had not moved.

We saw people leaving the line who purchased tickets, after nearly an hour of waiting in the freezing cold. A lot of fans were upset, and we were sad to see so many people waiting that decided to leave. You shouldn’t have to wait in the cold for an hour if you purchased tickets and there’s no one in the club. The bouncers at the club were extremely rude and you could tell people were extremely disappointed. As were we.

We have had several great experiences at Dim Mak before this. We’ve seen a lot of great talent, including Aoki himself in Dim Mak Studio’s small and intimate atmosphere. However, we very disappointed to see the disorganization and lack of professionalism from all of the staff towards ticket holders and people that RSVP’d. We even asked someone at the door what was going on, and his response  was “we have to let all the VIP people in first.” We said to him, “Look at all those people waiting in line to RSVP.. does that mean something?” He just shrugged and walked away. We looked at the line several times and didn’t notice it move for ticket holders or RSVP till about 11:15. What a disappointment!

Dim Mak invited us to the event, and although we were in pretty quickly, we were sad to see you fans waiting out in the cold. Dim Mak provided chips and guacamole in the VIP lounge which was cute, but it also wasn’t the open bar that a lot of press/media were promised. We spoke to other members of the media and press that didn’t get the open bar as well, and they were just disappointed. We’re not too sure where the disconnect happened, since we’ve only had great experiences as media when attending other clubs.

This disappointment and miscommunication with the ticket holders did not leave a good taste in our mouth. We’re invited to events all around the country but never saw something so disorganized for fans or for press. We hope Dim Mak will avoid these problems in the future and provide a better experience to the press/media, and most importantly, to their ticket holders.