EDM Maniac is incredibly excited to announce that our second volume of “Sabor de Espana” (A Taste of Spain) will be streaming on Insomniac TV this upcoming Thursday, June 24 from  10:00 PM  – 12:00 AM PST. This spectacular two-hour event will take place at the beautiful Castillo de Atienza in Spain; the perfect setting for our second musical culinary experience, which will be broadcasted exclusively on Insomniac TV’s Twitch and YouTube channels.

“Sabor de Espana” (A Taste of Spain) will be a techno livestream that will feature unique performances from Ramiro Lopez B2B Lilly Palmer and Auriga. Our second volume of “Sabor de Espana” will also feature ChefLopez, who will be cooking salmon and rice throughout the duration of the event.

Ramiro Lopez (AKA Chef Lopez???) was born in Toledo, Spain where he was introduced to radio programs and specialized music compilations at a very young age. It wasn’t until 1996 when Lopez began to develop a passion for Spain’s underground nightlife. Once he did, Lopez began working as a DJ before becoming a producer, developing his skills on the decks and establishing himself within Spain’s underground music scene. After years of continuous success, Lopez created Indo-Spanish record label, Odd Recordings, to bring futuristic electronic music with a raw side of techno to fans of all cultures. Lopez has since gone on to produce multiple club hits on the label and has been able to perform his music all around the world.

Much like Ramiro Lopez, Lilly Palmer discovered dance music at a very young age. At just 17 years old, Palmer began experimenting with electronic dance music and after attending a few techno parties in her hometown near Munich, she immediately fell in love with it. A couple of years after experiencing some of her first techno parties, Palmer moved to Berlin where she further discovered her passion for electronic dance music. In 2015, Palmer took it upon herself to dive into the music industry and since has produced countless impulsive tech and melodic tracks that have accumulated thousands of plays.

Auriga (Alejandra Gonzalez) is a Spanish  DJ who became engaged in music when she was just a child. Her youthful appreciation for music allowed her to study piano at the Oviedo Conservatory of Music where she began to develop a passion for Spain’s underground music scene. Auriga’s music is categorized as a “techno sound with minimal influences, full of melodies, vocals, powerful bases, and a great connection to the audience.” Her success in both school and as a DJ has enabled Auriga to perform at the most famous clubs and parties in Madrid, including Goya Social Club, Studio76, Florida Retiro, and Cafe La Palma, among others. Auriga has also been able to perform at Cafe Mambo in Ibiza.

We are incredibly excited and looking forward to listening to two beautifully curated sets from Ramiro Lopez B2B Lilly Palmer, and Auriga, as well as cooking instructions from ChefLopez. We can’t wait to show you what we have in store! Make sure you are following Insomniac TV on Twitch and YouTube to watch this special event on Thursday, June 24 from 10:00 PM PST -12:00 AM PST. 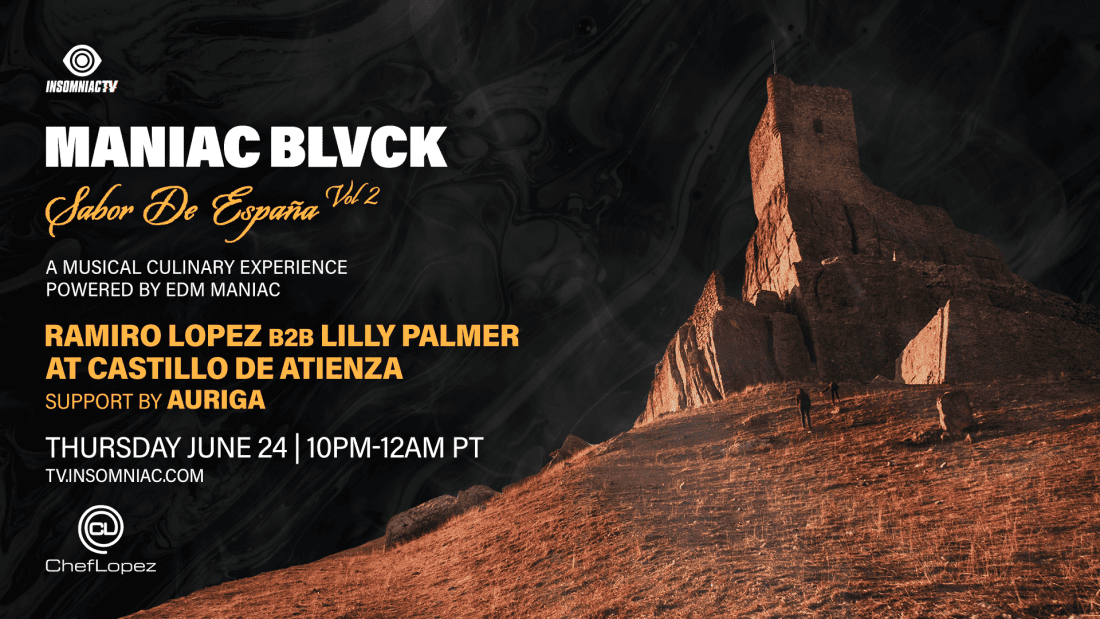 Essentials to Pack for Your First Music Festival