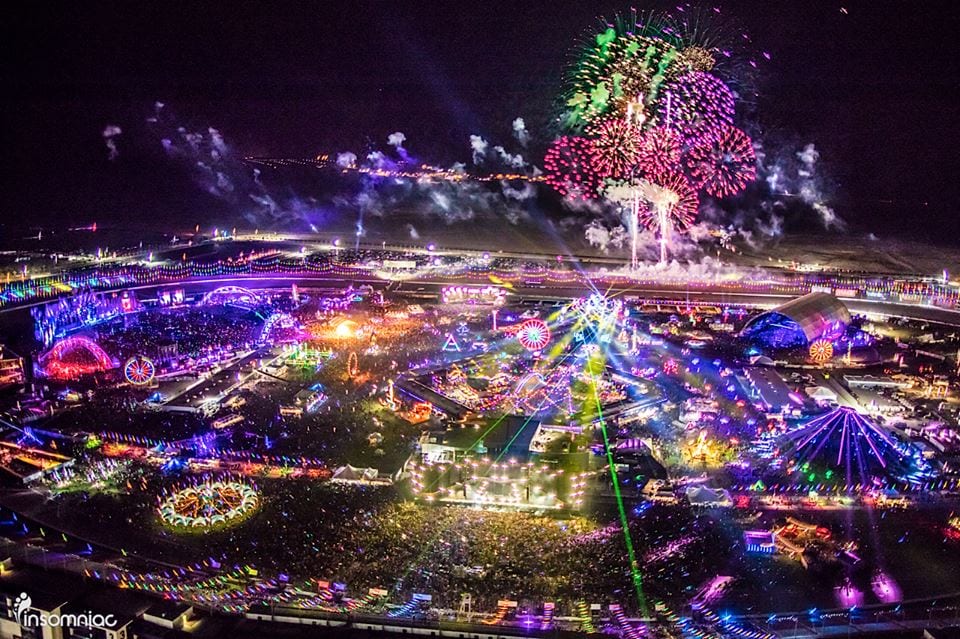 The largest electronic music festival in North America will celebrate it’s 20th anniversary this summer. Electric Daisy Carnival (EDC), turns 20 years old this year. EDC Las Vegas will be celebrating the major milestone with it’s most epic production to date. Be sure you are there June 17-19 at the Las Vegas Motor Speedway, otherwise you’ll be diagnosed with a severe case of FOMO. More than 400,000 people are expected to attend over the three day festival. Make sure you are one of them!

I first started raving in San Francisco in 1998. I attended parties at 2nd & Jackson in Oakland, as well as Home Base, Maritime Hall and Bill Graham Civic Auditorium in SF. I was hooked. My friends took me to my first rave in Southern California, which was Nocturnal Wonderland. There was NOTHING like partying in Southern California.

I remember attending my first EDC back in 2003 at the NOS Events Center in San Bernardino. It was like I had been transported to a glowing world full of thumping beats and freaks. We were dressed in our oversized JNCO’s, Adidas t-shirts and visors with wrists full of kandi bracelets. Stages were located inside the various expo halls at NOS. Back then, they had the latest in lighting, some hanging art installations and a few booths with kandi..a far cry from what we now are treated to. There was no confetti or CO2 blasts, just a lot of love for the music. That is what kept drawing me back year after year.

I’ve attended 10 EDC’s to date. It blows my mind to see how this festival has evolved over the years to become one of the biggest and best music festivals in the world. One of my top EDC memories: walking into the LA Coliseum in 2010. I had taken a few years off from raving and was in awe of I had just encountered. Rides, numerous stages and a lot of smiling faces. I attended with my best friend, and two other friends I had met two months prior to EDC. Those two were treated to a wild weekend and initiated into the Insomniac family. We are now all best friends and one happy rave family.

Flash forward to today, 2016. Electric Daisy Carnival has become it’s own BRAND. The festival has expanded overseas to London (UK), Brazil, Mexico and Japan! There are now 3 editions of EDC in the USA: New York, Florida and Las Vegas.

EDC moved from it’s home in Los Angles to Las Vegas in 2011. It’s grown in size ever since.

Expect the team at Insomniac to go over the top in every way possible with surprises beyond your imagination for the 20th anniversary. If you’ve attended regularly, you’ve witnessed the stages growing in size. I mean what can top last year’s massive main stage? I’m eagerly waiting for the gates to open so I can find out that answer.

I asked some of my friends about their favorite moments at EDC. Here are their answers in their own words:

Diana Jimenez: My favorite moment of every night is randomly running into my friends. We all know reception sucks and we try to coordinate, but by the magic of the EDC gods I’ll be dancing or just walking around and turn to look and there they are!! We all shout and run towards each other and get big hugs!!

Carinne Ball: My favorite EDC moment is when I got to let my Fedde Le Grand flag fly and he saw it and he threw me a heart. I also enjoyed dressing up as a ladybug one year.

Kelly Turner: My favorite moment was walking into the speedway for the first time in 2012. It was literally the most amazing, surreal moment in my life thus far. It still gives me goosebumps to think about.

Maggie Vue: My fav moment was in 2010, the last time it was in LA. That year was the year my 3 great friends joined me for the first time. We all traveled together and made shirts for the most memorable time of our lives. They were so excited because they did not know what to expect at EDC. I told them it’s a whole new different world with much nicer people who just want to have a great time. I also told them that they would be entering my world, a world with kindness, great music, epic scenery and lots of dancing. When we walked in, I could see their faces with amazement of how big this place was and how many ppl were here. All I could say was, I told you so.

Andrew Whitfield Clark: 2014 EDC Las Vegas I literally lost everyone I knew and since I didn’t want to waste any energy being stressed out trying to find anyone, I wandered to main stage alone to see Above & Beyond. Their set melted away any stress I had about being lost and alone, and right at the end of it I turned around and saw my friend dancing 10 feet away from me that I hadn’t seen in 3 years. We had a major hug it out “omg how are you?!” sesh and then he and his crew invited me to join them for the rest of the night cause they didn’t want me to be alone. It was so amazing to catch up and meet his other friends in such a contagiously energetic atmosphere! It made me feel like I was never really lost at all. Just the universe giving me a shove to find an old friend.

Oliver J. Santos:  My favorite story about EDC is in 2013 when I went with two of my younger cousins and basically did not know anyone else who was going. They had their friends and I didn’t have a crew. I was solo. As I entered EDC, I didn’t panic, as it wasn’t my first EDC, but my first in Las Vegas so the excitement was still there. I knew of a few acquaintances that were going so they told me to meet at the Chapel Day 1. From there, we would meet, coordinate, and then disperse under the Electric Sky. As soon as we got to Circuit Grounds for Thomas Gold, I lost everyone. I went to use the bathroom and grab a drink, but we set up a “spot” where we would all meet in case everyone got separated. Low and behold, I would always find them. Coincidence? Maybe. But ultimately, I didn’t panic as I knew, no matter who I would run into at EDC, they would extend themselves with open arms and take you in. That’s how I felt with the group I was with. They didn’t know me well, we never hung out back home, and yet they trusted me. That’s when I knew these people were going to be some of my closest and one in particular, become one of my best friends in the world, Gigi.  She and I bonded right from the beginning, but it was EDC, that I knew, I had a connection with her. Corny as it seems, but I LITERALLY met my best friend at EDC. It was the final day of EDC and second to last was Ferry Corsten. Being the trance head that I am, I couldn’t miss it him. A song came on and Gigi and I both looked at each other and without saying anything, we were like, THIS song is everything!! EDC came to a close that weekend and I had the most amazing and unexpected weekend of my life. I wasn’t sure if these people would be in my life moving forward… To this day, I’ve kept in touch with most of them and some are still my best friends, esp, Gigi. Gigi messaged me later the following week and asked me, “do you remember that song that came on and it goes like “bom bom” (MOST PEOPLE WOULDNT UNDERSTAND) but I was like, “oh was it, Ferry Corsten and Giuseppe Ottaviani’s Magenta?”
Gigi’s response,” OMG YES, how did you know?!”
My response, “I just knew that moment you looked at me, that was THE SONG.
So to this day, it will forever be our song and the day we really knew we were going to be best friends. The rest is history.

EDC Las Vegas is set for June 17-19 at the Las Vegas Motor Speedway. Tickets are now on sale. You can find all that info on the official EDC website: here.

Be sure to check out my article here on EDM Maniac on the 12 Reasons Why EDC Las Vegas 2016 Will Blow Your Mind.

Also, let me know some of your favorite moments at EDC in the comments section. I’ll see you this summer in Sin City for what will be one epic EDC.