The full lineup for the biggest party in North America, EDC Las Vegas 2018 has officially been released.

EDC Las Vegas 2018 is set for May 18-20 at the Las Vegas Motor Speedway. The lineup for the 22nd EDC was revealed on a special Wednesday evening episode of Night Owl Radio. Fans tuned in to the EDC Las Vegas Facebook page as Pasquale Rotella, founder and CEO of Insomniac, rolled out the reveal, stage by stage, one artist at a time, through a set of specially curated mini-mixes made for each of the EDC’s eight stages.

Some lucky “headliners” across the country received a special Valentine’s Day surprise today from Insomniac Events. The gift included candy hearts with names of the artists playing EDC Las Vegas 2018.

In his second of three Valentine’s Day surprises, Pasquale Rotella revealed the theme and special artwork for this year’s EDC Las Vegas as ‘Kinetic Love.’ Signifying the second pillar of PLUR, the powerful symbol gives a nod to the unconditional appreciation and acceptance that thrives within dance music. Celebrated by a culture that empowers its community to grow and create unforgettable memories, Kinetic Love will bond over 400,000 Headliners together Under the Electric Sky, creating an environment of good will and beautiful, connected spirits.

In celebration of Insomniac’s 25th anniversary, fans will see the premiere of five brand-new EDC stage designs for kineticFIELD, circuitGROUNDS,neonGARDEN, bassPOD and the new open-air quantumVALLEY experience. In addition, fans will enjoy once-in-a-lifetime performances from their favorite artists at cosmicMEADOW, wasteLAND and the brand-new Insomniac Records stage. New to the festival this year, Headliners will also be treated to early-entry opening ceremonies on the cosmicMEADOW lawn beginning daily at 4 p.m., including extended sets from different artists just before sunset.

Take a look at the full EDC Las Vegas 2018 lineup below. 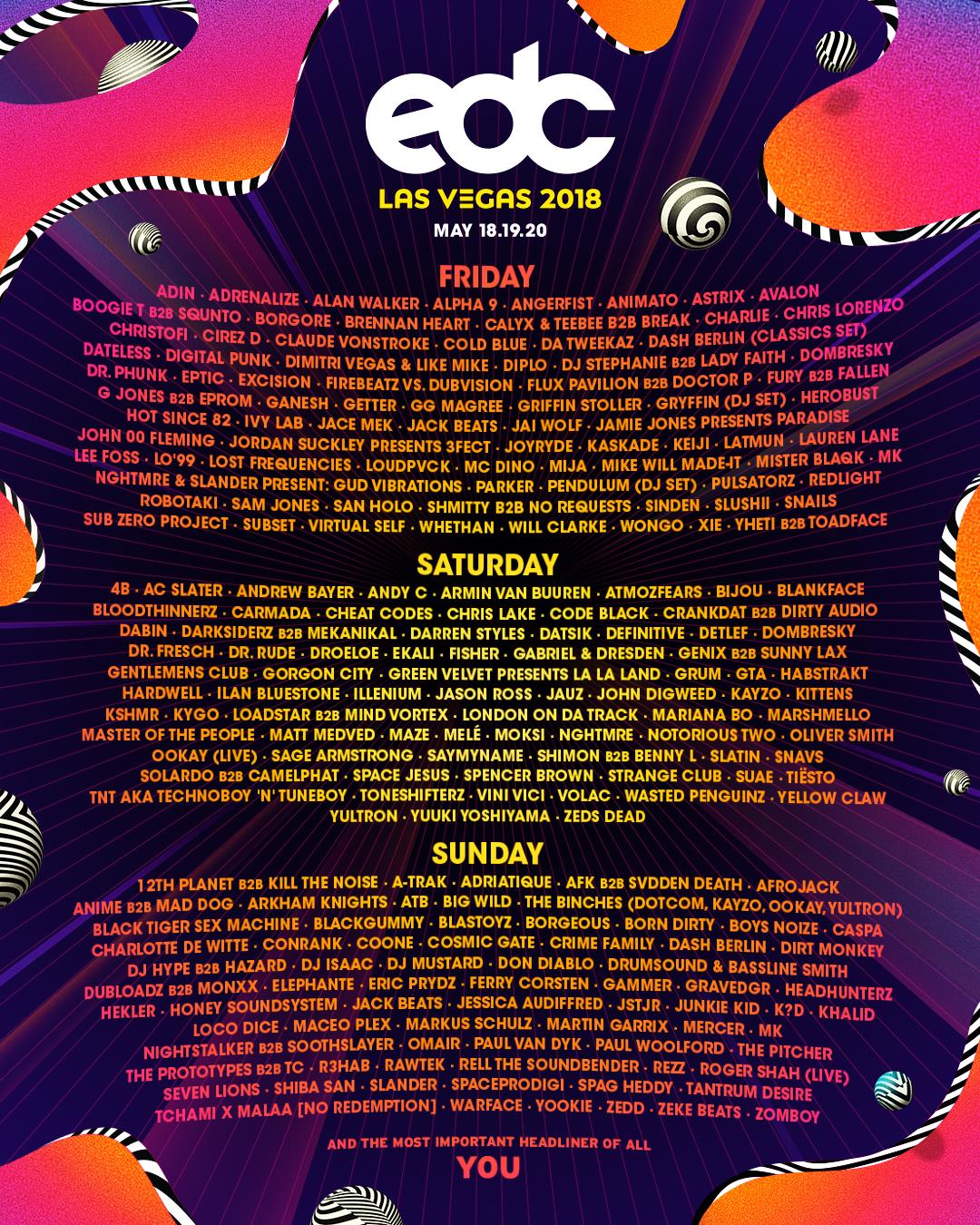 EDC Las Vegas 2018 tickets are on sale here.  A limited number of camping packages are available for purchase on the EDC Las Vegas Camping website.

For the most updated details regarding EDC Las Vegas, layaway plans, and for answers to other ticketing related questions, a FAQ has been created on LasVegas.ElectricDaisyCarnival.com/tickets.