May 1-2 at Mana Wynwood in Miami is looking hot and heavy with talent as 7th edition alternative music and arts festival III Points provides us with the jams. With all sorts of genres to look forward to, III Points’ 90+ artists including headlining sets from major hip-hop, rock and electronic touring artists including The Strokes, Robyn, Wu-Tang Clan, Disclosure, Kaytranada, Caribou, Amon Tobin Presents Two Fingers, Chris Lake, Stereolab, Tycho, Green Velvet, and many more.

The Strokes return from a 7-year music making hiatus with a highly anticipated album and III Points debut. Grammy nominated singer-songwriter Robyn will also be gracing the stage for her III Points debut. We-Tang Clan has quite the treat for attendees as they’re set to hit the stage together as well as separately to showcase their wide range of group and individual talent on their debut album’s 25th anniversary (Enter the Wu-Tang: 36 Chambers). Disclosure, Caribou, Amin Tobin Presents Two Fingers, Chris Lake, Stereolab, Tycho, and Green Velvet hit the stage as well for their first time, while Kaytranada will immerse fans in quite the experience for his second III Points appearance.

For two days, III Points will transform one of the city’s most vibrant, happening districts into an inimitable immersive experience with thoughtfully curated stage designs featuring the latest in technology, stunning living art activations from renowned international and regional artists, exquisite food and beverage offerings highlighting local cuisine and culture, and more. 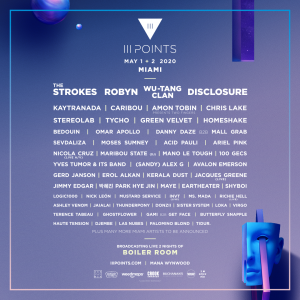