Exclusive Interview with Blossom at Beyond Wonderland

Blossom is known among Phoenix locals, Night Bass regulars, listeners of LP Giobbi’s Femme House Radio ,and her Pinkies (what she calls her fans) for her fiery pink hair and her signature bass-house sound. She has dropped heaters such as “Need You“, “Super Bad“, and “What They Say” while playing huge festivals like Decadence, EDC Mexico and Firefly Music Festival, and she is introducing drum and bass to dance floors all throughout the US and beyond.

We got the chance to interview her after her set at Beyond Wonderland 2022 and hear about her early career, DnB influence, and achievements as a woman in a male-dominated industry. Travel to Pink Planet with us and Blossom below.

EDM Maniac: You began by training violin and viola at the age of two and continued on to play orchestra for twelve years. How has the traditional music background influenced your sound or process?

Blossom: I think it just gave me a more refined ear, since I’ve just been doing it for so long. I took quite a long break between doing orchestra and starting this project. They aren’t exactly aligned but, it’s certainly in my production.

EDM Maniac: You grew up in Phoenix, Arizona and got your start in 2013 after submitting a DJ mix to Global Dance Festival Arizona. You’ve also performed at several Arizona staples like Decadence, Phoenix Lights and Goldrush. What is it like performing for your home crowd versus traveling out of state?

Blossom: Phoenix has the most crazy scene. I feel like because I came up in the scene—I started in 2015—it’s all the same group of people that are supporting each other. It’s a big place, but it also feels very small, so it’s very supportive. I love being from Phoenix and I love our Phoenix crew.

Blossom: Very split I would say; house-heads and bass heads. Completely split, which is great for me because I am both house and bass: bass-house.

EDM Maniac: You stated to Relentless Beats, “I never thought of music becoming a serious career until I started college in 2012 and went to my first music festival in 2013”. Do you find music inspiration from attending music festivals as both a performer and a fan?

Blossom: A little bit, but when I’m playing at a show, especially now, there’s just so much chaos surrounding it. So I’m not soaking too much in as much as just enjoying being with the people that are here for me and ride or die for me and I’m so grateful. I would say the biggest inspiration I get is just from listening to a ton of music. I find when I’m not listening to a lot of music, I have a hard time conceptualizing songs or figuring out where I want to draw from. Honestly, I listen to a ton of liquid drum and bass because I feel like it has just opened my mind up completely to a new sound and new complexity.

EDM Maniac: Do you have any specific inspiration for liquid drum and bass?

Blossom: My favorite right now is Monrroe. I soak up his sets and probably listen to his same sets over and over. His liquid sets are crazy!

EDM Maniac: Speaking of drum and bass, you just dropped a new DnB remix of Black Caviar’s Hispanoamericano (ft. Euri) and had your first live DnB set at Firefly Music Festival in 2021. What has been your inspiration into the world of DnB? Can we expect more DnB releases or full sets this year (which personally I am extremely excited for #DnB 2022)?

Blossom: Yes, we are making it happen! You know at the beginning of last year, I was mainly live streaming. I started streaming in March 2020, and at the top of 2021, I found myself at a place in my life where I was feeling really low. Something about drum and bass really resonated with me in a way that other stuff didn’t at the time.

I just started listening to it so much by myself. I was streaming twice a week doing house sets and I just wanted something a little different. So I thought, ’Maybe on Thursdays I’ll do drum and bass and explore because everyone here is in the same boat.’ I just fell head over heels in love with it. I didn’t even know it could show that side of me. I’ve just been able to explore different avenues of myself and my emotional self with drum and bass and I just feel really connected with it.

All last year, people were asking me ‘Are you going to make it, are you going to make it?’ I was like ‘No, it’s my hobby, my passion, my fun thing I do on the side.’ But then I got the opportunity to do the Black Caviar remix and I thought, ‘You know what this sounds like a drum and bass song’, and they asked me to do drum and bass and I just tried it and, I was like this is the most fun I’ve had in a long time. So I’m just leaning into it and letting myself explore. I think the best thing you can do as a creative person is to not keep boundaries up on your creativity and allow yourself to explore all parts of yourself. That’s the purpose of art. 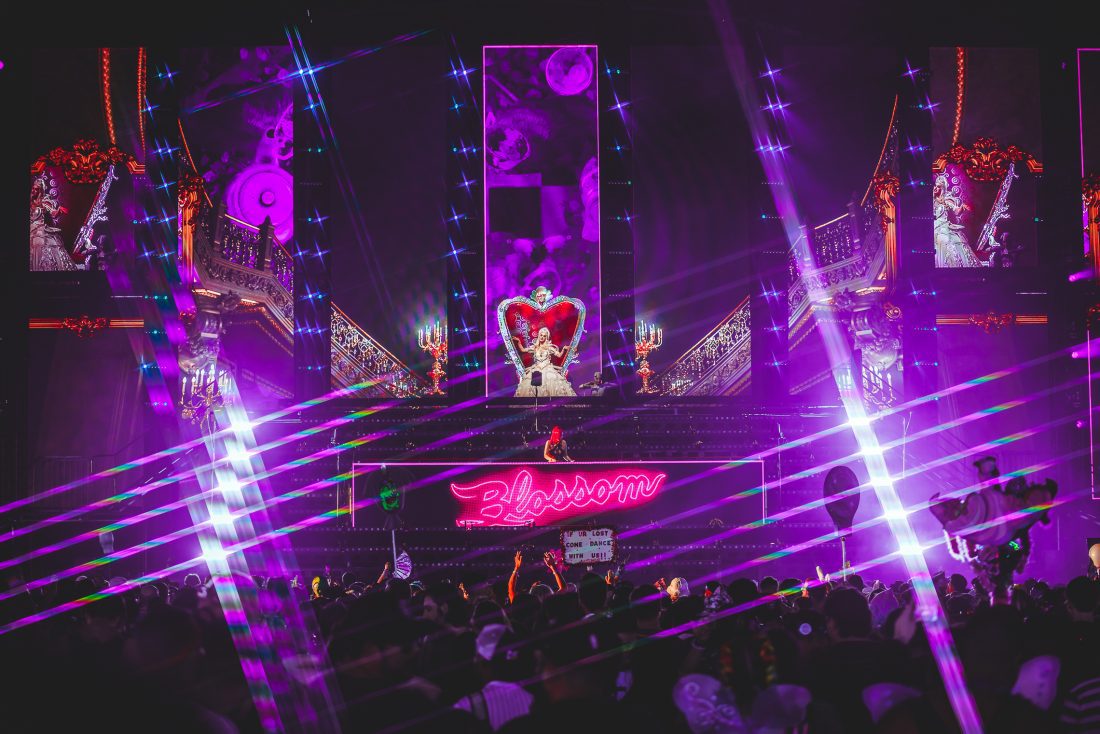 EDM Maniac: You are currently judging the Discovery Project this year at Beyond. How do you feel about having the opportunity to help advance the career of younger producers? What advice do you have for future entrants of the contest?

Blossom: I’m incredibly honored because I got my start in a DJ competition and at the time I just thought, “Oh, this is cool”, but then it opened the door for my whole career. Getting to be that person for another artist is a really special, full-circle moment. To be a judge on this scale for Insomniac and to give someone that opportunity at an Insomniac event is so surreal and I’m honored to have the privilege to be the person deciding this for someone.

I think for future contestants, what I looked for personally, was versatility. From the song to the mix. I wanted something that really showed the full spectrum and felt like it had great energy and was something for a festival. In my sets I really like to hit different notes and keep the energy up so I took that perspective when going into judging.

EDM Maniac: You’ve performed at some insane shows last year: Bonnaroo, Lollapalooza, and your first International festival, EDC Mexico, but your set at EDC Mexico was absolutely amazing. How has performing at international festivals been different from the United States or even local shows?

Blossom: Beyond anything else I feel so shocked that people in other countries know who I am. It’s an insane experience to have fans come up to you in Mexico and say they love your music. I can’t believe my music is reaching that far. So it’s a crazy experience to meet people in different countries who know me, know my music and are part of Pink Planet. It was really awesome; I had an awesome time. The crowd was so wild.

EDM Maniac: You also just finished a few shows of the Night Bass Confessions tour w/ AC Slater and Tchami and Bijou’s Unlocked Tour. What’s it like to work with such knowledgeable peers and what have you learned from them?

Blossom: AC has been one of my supporters since day 1. One of my teachers at production school was Petey Clicks- this was back in 2015- and he connected us, but I’ve always loved Night Bass and I really hustled to get on AC’s show in Phoenix in Summer 2015.

From there we just started a friendship based on mainly saying ‘Hi’ at shows and I waited until the right time to show them I was doing music, which was around 2-3 years later. I just wasn’t ready yet to show them and from there he was so keen to bring me into the Night Bass family and he was so supportive from day 1.

So getting to be a part of his tour was just full circle. Tchami was one of the main reasons I started any of this. I was hearing his music at parties in college and I was listening to it at home alone. When hearing it live, something sparked in me like, ‘Why can’t I do this?’ The whole thing is really full circle for me.”

Blossom: Bijou has been my go-to person since I came out on the scene. He was the person who had made it. So it was nice getting connected with him and having him take me under his wing in production, general advice and he’s been a friend since 2015.

EDM Maniac: You are a regular on Diplo’s Revolution- Femme House Radio hosted by LP Giobbi. What’s it like to be a part of such a supportive space for female house artists?

Blossom: It’s awesome! I felt very welcomed by the female artists that are out there. I’m grateful that I get to share my perspective as a woman on a radio-show of that capacity. It’s been great to have her support and she’s such a bad-ass. She’s crushing it.

EDM Maniac: You were a part of the EDC Opening ceremony and the only female artist to perform at any of the opening ceremonies. How has being a female in the industry affected your career? As a prominent female in the male dominated space, what advice do you have for anyone looking to produce full time?

Blossom: You just have to go for it. There’s always going to be people that are not expecting things from you or not believing in the things you do. You have to have a strong core purpose and drive in what you are doing. Just remember who you are, what you are showing, and the hard work you are putting in. I think at any point, people will doubt you, no matter if you are female, male or non-binary. Regardless, you have an uphill battle. No one believes you when you say you’re going to be a DJ/producer, so stick with it, stay true to yourself and know what you have to offer in everything that you do.

YouTube Will Stream Interviews, Shorts, Pre-parties And More From Coachella 2022