Kaskade Has Some Seriously Big Plans For Coachella

Ah, yes. It’s that time of year. Festivals are popping up around the country, the sun is shining and the music is in the air.

We’re about to hit the month of April (crazy, right?) and full on into festival season. Tons of great events happening this month, including back to back weekends of the Coachella Valley Music & Arts Festival in Indio, California on April 10-12 and April 17-19. The festival promises a sleuth of dance music’s biggest artists, including Alesso, Nero, Porter Robinson (live), Flosstradamus and more.

One big name also hitting the Sahara tent will be the return of the man himself, Kaskade. Kaskade has had a pretty crazy year already, touring at festivals around the world, a grammy nomination, and his latest single ‘Never Sleep Alone’ set to be relased out on his new label Warner Bros. Records on April 6th.

To this day everyone talks about Kaskade’s infamous set from 2012 at Coachella, but yesterday he upped the ante by simply posting on Twitter “Coachella 2015 > all sets.” Kaskade is set to seriously outdo himself when he takes the stage for what will undoubtably be another monumental set in his career. It will all go down right here in California.

We’re only 8 days away from Coachella, and can’t wait to see what big plans and surprises he’s got in store. Until then, relive his amazing set from 2012 down below to get you pumped. We’ll see you in Indio! 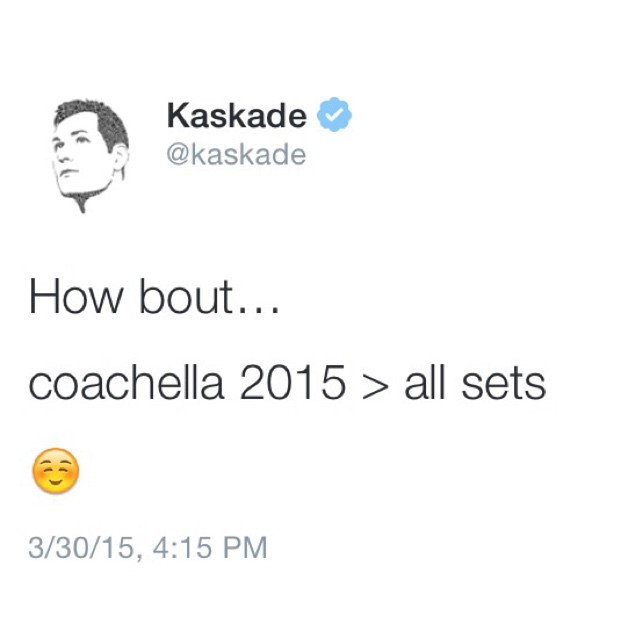