Let’s Talk About Cancel Culture In The Dance Music Community

The concept of cancel culture is the epitome of a double-edged sword. With the rise of social media, consumers have been given the power to control the world’s narrative like never before. We get to share our thoughts and stories, hold people accountable for their actions, and promote transparency from these giant entities that used to get the final say on everything. Little voices are given a platform that can reach across the entire world, and that is objectively beautiful. 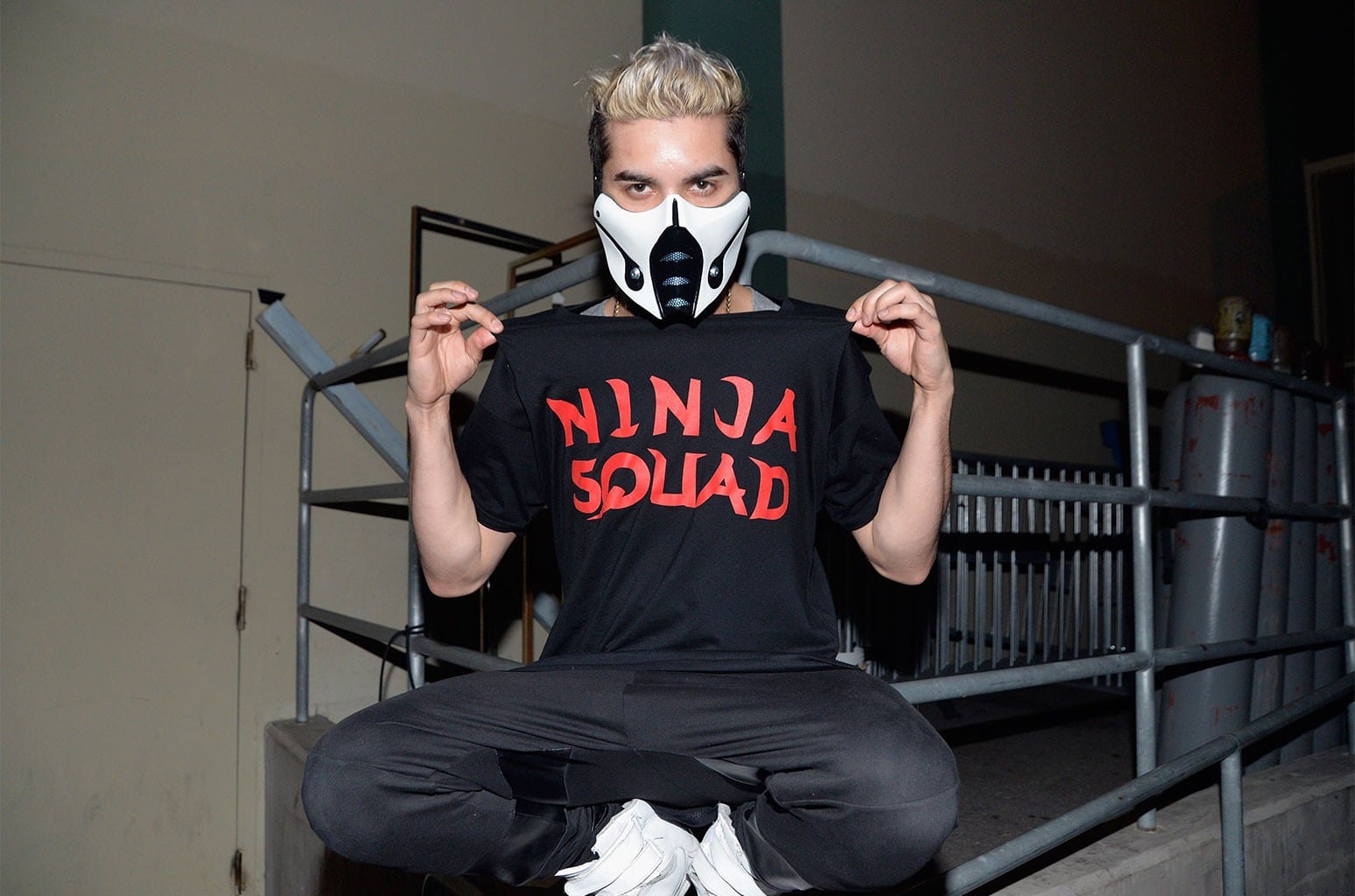 We have seen this phenomenon truly help our community. One of the most well-known instances of this is with the artist Datsik. Datsik was dropped from Deckstar and Circle Talent Agency after a series of sexual assault allegations came to light. A Facebook thread, reposted by @_princessjay on Twitter, showcased women who shared their stories of how Datsik had sexually assaulted or attacked them when they were with him while he was on tour. Datsik, who had a large platform and following at the time, openly denied all allegations. But, the sheer volume of women speaking their truth and holding him accountable eventually won. Datsik had to cancel the remainder of the tour and step down from his position in the industry. He eventually came out addressing that he was wrong for his actions and apologized for the pain he had caused. But at that point, it was far too little, far too late.

yall i have to delete my original tweet due to a request for privacy, here it is for the 3rd time! pls RT pic.twitter.com/WHnxXI9ptN

After Datsik, we saw a rise in women speaking out about the pain that had been caused by major artists in the EDM scene. In a study conducted by the Press Association, 43% of women have faced unwanted sexual behavior at a music festival. While this isn’t exclusively about the behavior of the artists, a shocking amount of the allegations have been. Artists such as Bassnectar, Space Jesus, and Billy Kenny have been at the forefront of the canceling movement for sexual misconduct. The choices that these artists have made are terrible and one of the most infuriating parts is that they will openly deny these claims until they are proven to be true.

This is where the good part of cancel culture comes in. While social media certainly has its downsides, we can all agree that the power it has given people to hold others accountable is incredible. These artists who once held all the power now have to admit to their wrongdoings and change their behavior. This spans past just the realm of sexual assault. Artists have to be careful with the verbal content that they include in their music and share on their platforms. Promoting views that alienate, disrespect, or hurt others has real consequences. Even if an artist has inappropriate views, they can no longer use their platform to glamorize them to their fans.

That being said, the reason why this concept is so controversial is that people have become so quick to cancel. If one bad thing is brought up about a public figure, people have shown that they will ‘cancel’ them without really investigating the situation or giving them a chance to work on themselves. While a situation like Datsik’s is very black and white, not all situations are that easy to judge. We can all agree that people who choose violence or hate speech should not be supported by a community that is rooted in love and respect. However, when things like ignorance or accidents come into play, the situation gets messy. 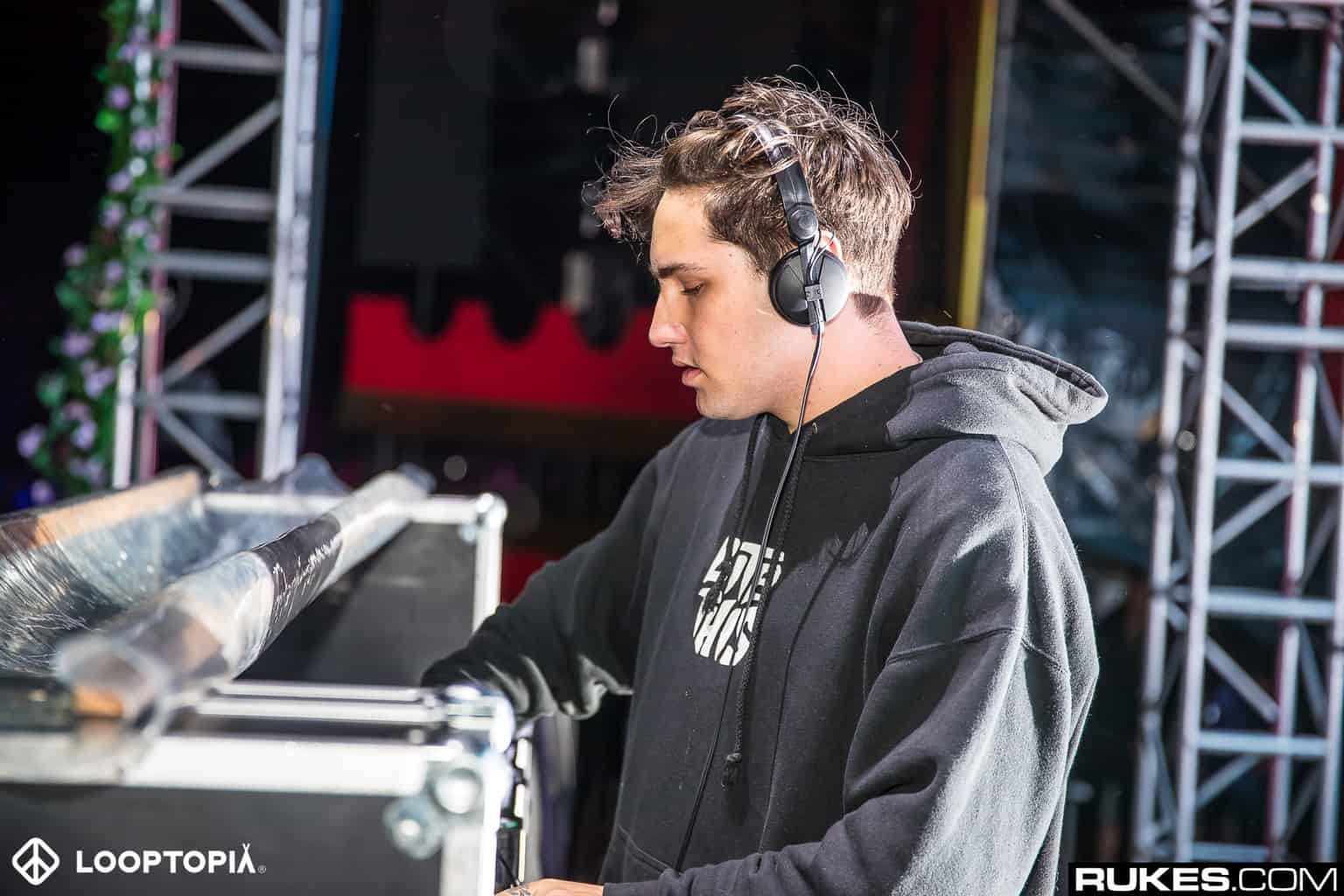 The easiest way to conceptualize the negative effects of cancel culture is really when it comes to ignorance. In November, during the 2020 election, Jauz posted a tweet that empathized with people who voted to keep President Trump in the office while also calling out people who had voted for Joe Biden for spreading negativity on the internet. While his Tweet was made with the intention to show love for all members of the rave community, regardless of his personal political views, it was not worded in a way that reflected that. 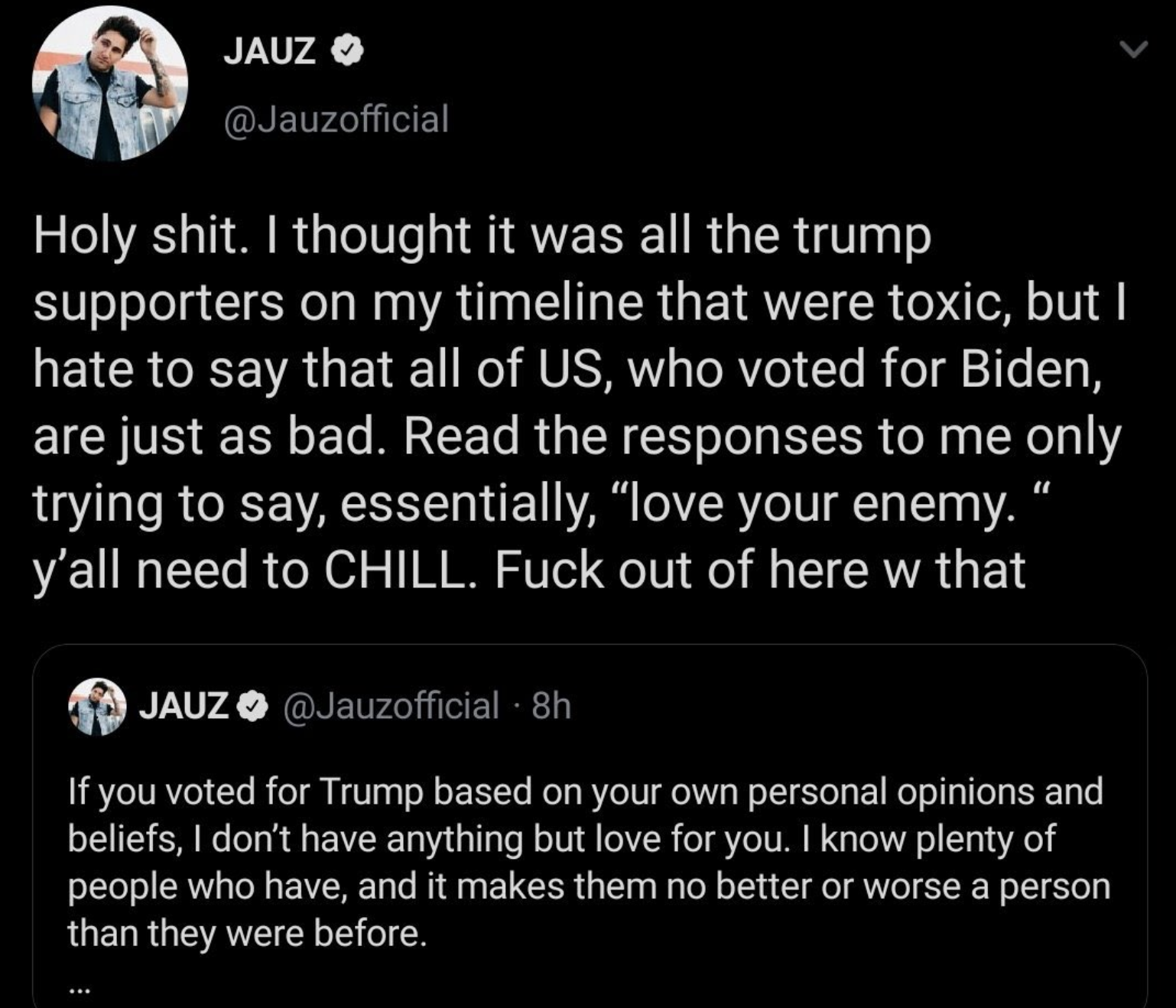 If you follow Jauz on Twitter, it is extremely clear that he falls on the liberal side in politics. However, with this Tweet, he alienated his fan base and made people feel as though he was discrediting their views and struggles. We are not here to tell you if how you felt about this Tweet was right or wrong. Each person has the right to their emotions and it is not our position to tell you how you should feel. Why we want to discuss this Tweet is primarily because of how Jauz handled the situation after.

Jauz was very close to being canceled. However, what saved him was that he apologized and took accountability for the situation. He did not shift blame, he did not ignore it. Instead, while he was sassy, he did acknowledge his role in the situation and asked the community to educate him so he could not make the mistake again. He held a Zoom conference to talk about the choice that he made and invited those he had offended to educate him on the situation. 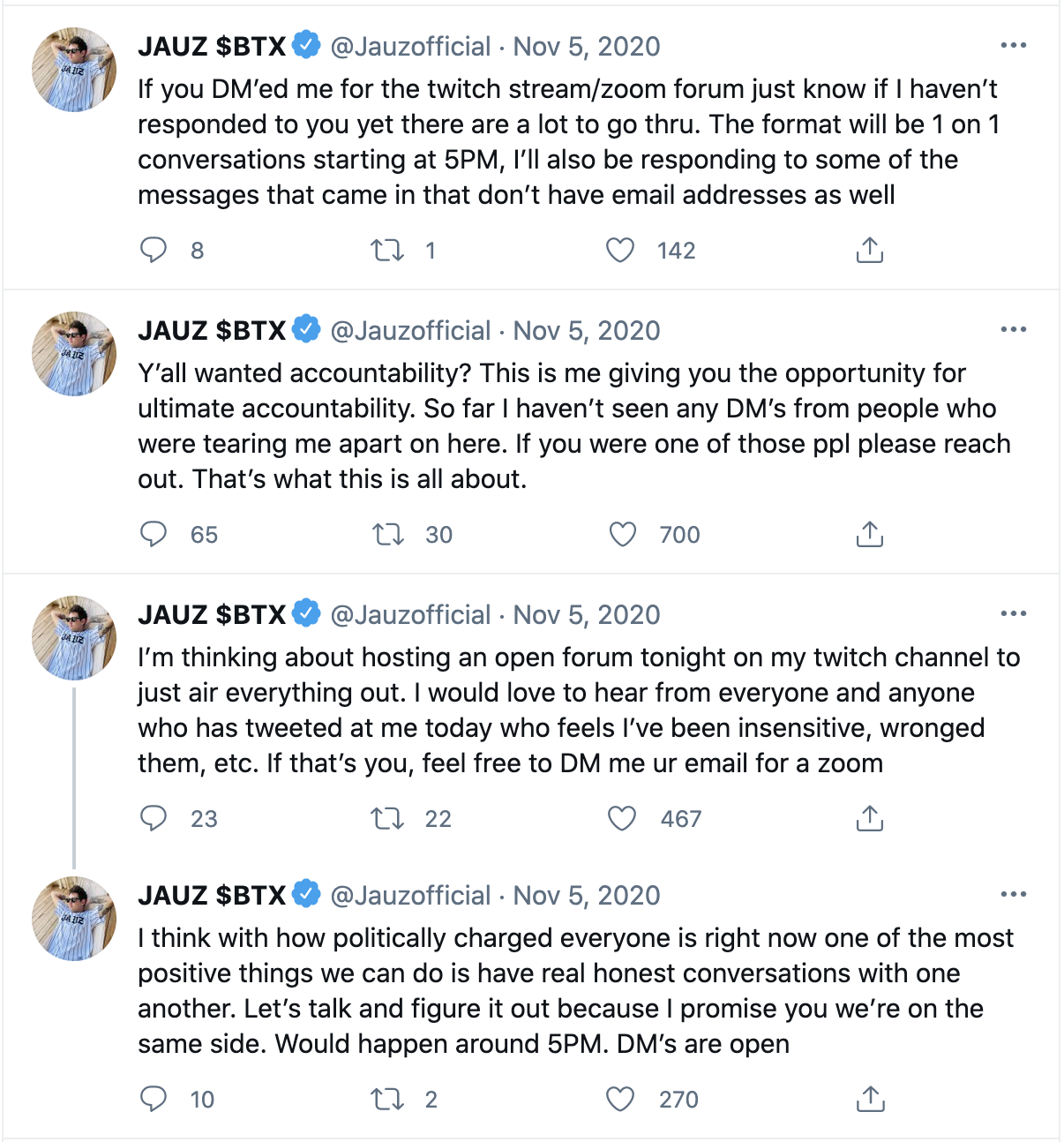 We believe that Jauz handled the situation very well, especially in such an emotional political climate. However, if the internet had simply just ‘canceled’ him, we would have lost an artist’s incredible work and Jauz would have never grown as a person. Like we saw with the artists condemned for sexual assault, with cancel culture, there are times where artists should lose their place in the industry. That being said, we believe that this is not always the case.

We hope to see a shift in cancel culture when it comes to artists that have been ignorant of their words or actions. A key part of this is the artist talking accountability and actively working to improve themselves. We acknowledge that we do not know many of the struggles that people have faced, and therefore, can not say which choices are bad enough to condemn a career for. However, our team is made up of a diverse selection of demographics and backgrounds, and many of us would rather see more change than ‘canceling’.

Artists and brands in our industry have a huge social media following. If they make a mistake then address it and promote how they can be better, then they can be leaders for how the rest of the community acts. To many, these entities are people’s role models and set the precedent for what is right and wrong. By giving people the chance to learn from their mistakes before just ‘canceling’ them, there can be a trickle-down effect that influences their followers to change their behavior as well. 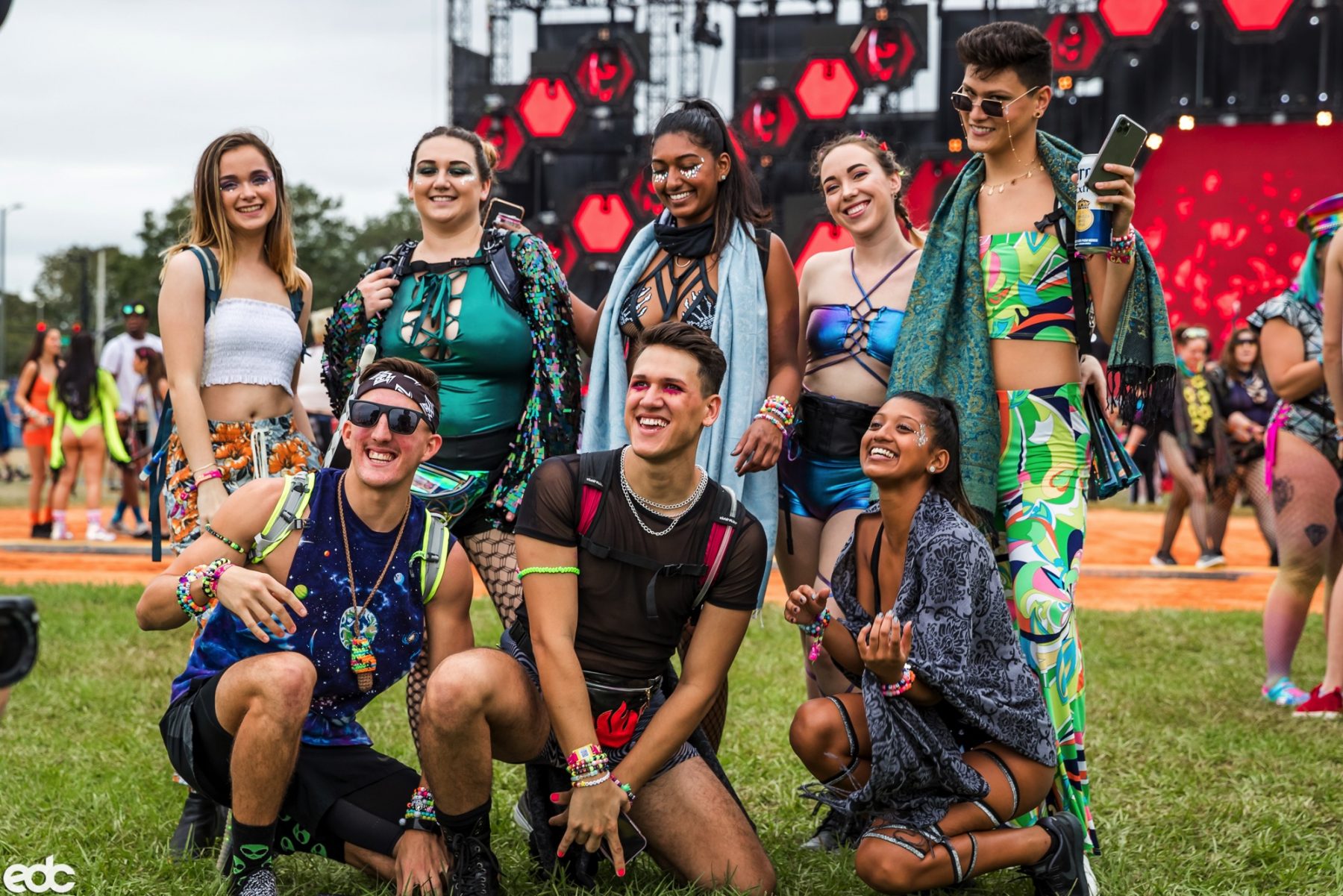 So use your voice, but be cognizant of what you want to come from it. If you want real change in the world, give people the chance to do that. Keyboard warriors hiding behind the veil of an empty profile can be vicious and unproductive. Share your views and stories, but make sure it counts for something. Stand up for what you believe in, and if the belief is worth ‘canceling’ someone for, we support you in that decision. But we hope that after reading this you think about what can not be forgiven versus what can be a lesson. Define what you expect from people, make sure they follow through, and help the next generation of public figures be people worth looking up to.

The Aoki Brothers Are Opening A Japanese Restaurant