Imagine winning a competition out of thousands of entries to perform at an Insomniac event. Imagine that competition being in front of thousands of people…. On New Year’s Eve. Well that’s exactly what happened to brothers Nathan and Zach Blaustone aka BLAUS from Northern California.

Nathan and Zach are this years Discovery Project (presented by Moto X) winners for Insomniac’s third annual White Wonderland gala being held in Anaheim, California.  White Wonderland is Insomniac’s only 21 and over event with a mandatory dress code. The Discovery Project is Insomniac’s unique salute to upcoming talent, and aims to provide exposure through their signature festivals. Thousands of entries are submitted, and for White Wonderland only one entry is selected. You can imagine the type of exposure this could have for anyone’s career, so when we had the chance to speak with this year’s winners we felt nothing but high energy and excitement. 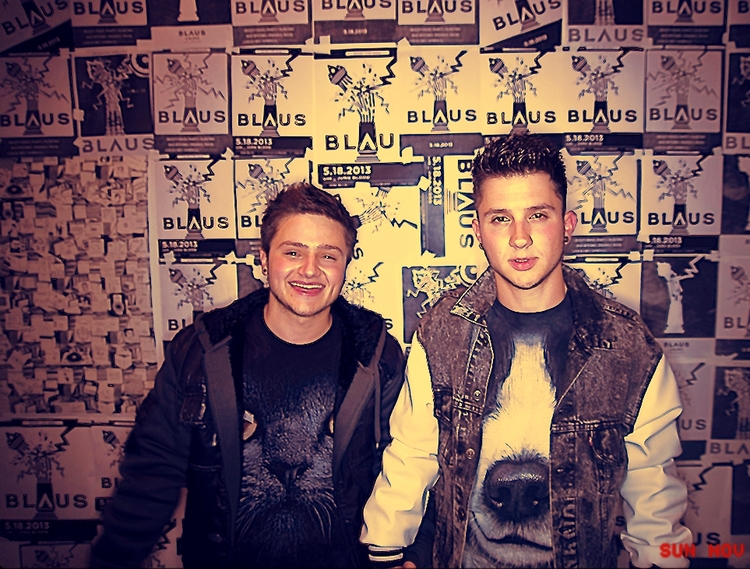 Their fresh and original sound combining the groove of deep house with the soulfulness of hip-hop to create an new sub genre of  dance music, led them to win the competition. On December 31st, Nathan and Zach will play on the main stage, and as part of their prize will have a chance to pick the brains of dance music legend, Laidback Luke. What’s surely to be a night to remember and to celebrate, we’re both excited  and anxious to hear the new sounds of BLAUS. We were so happy when we got a chance to speak with the duo before their big night, and you check out our interview below. GA tickets are SOLD OUT for the event, but VIP tickets are available at www.whitewonderland.com, and we can bet it will be a night to remember as soon as BLAUS takes the stage. Congrats to Nathan and Zach on your win, and we look forward to catching your opening set at Insomniac’s White Wonderland!

EDM MANIAC: First, congratulations on winning Insomniac’s Discovery Project! For those that aren’t familiar with you guys, can you tell us little bit about yourselves?

BLAUS: Thank you so much, we are beyond excited for this opportunity.  To try and be as simple as possible and to not confuse you much, these questions will be answered by Nathan (Me) the older brother of the brother duo, BLAUS. Nathan is 23 years old and has a BS in Nursing from the University of San Francisco. He has been playing drums since he was 8 and also plays the guitar and piano. Zach is 21 years old, is an incredible barista, at one point was working at becoming a pro skateboarder, has an incredible voice, plays guitar and messes around on the piano. We are both Italian.

EDM MANIAC: How would you describe your sound?

BLAUS: We call it ‘Booty House’. The electronic dance scene is filled with hundreds of different genres and is constantly being argued with it’s fans and listeners on what to call things, we realized that we couldn’t find a specific genre for our music, so we made our own. Booty House is a mixture of Hip Hop, Deep House, Ambient Dub and Cosmic Disco.  Basically our sound resembles the atmospheric feel of deep house sandwiched between the ass-pounding beats inspired by the Bay Area hyphy movement.

EDM MANIAC: When did you start making music/ how/when did you get inspired to create electronic music?

BLAUS: Both Zach and I have been playing music our entire lives. We were raised in a very religious family and when we were really little our parents traveled helping different churches with music as worship leaders for the services. Ever since we could remember our parents practiced worship songs in our living room; both sang with my mother on piano and my father playing the guitar. Mama BLAUS taught me the basics on piano when I was around 8 and Zach started playing the guitar and singing when he was around 10.  Soon after I got my first drum set and focused all of my energy on percussion. It wasn’t long until the both of us were playing worship with our parents and involved in multiple different areas of the church scene.  We’ve had our experience in different bands and genres from emo to hardcore but when I was 15 I got my first computer and a friend gave me the Windows based program, Fruity Loops; this changed my life forever and completely reformatted the way I looked at music. 2 years later, BLAUS was born and shortly after that, Zach joined me in it. Our inspiration for electronic music comes from an abundance of genres but we found beauty in the sheer freedom of production. No longer are we stuck with the only sound of an upright piano or a simple Sonar drum set; now thousands of different synths, bass, percussion and anything you can imagine was at our finger tips. Electronic music has given Zach and I the ability to be exactly who we are and share with others every area of our passions. Whether it be drums and piano or 808’s and synths, electronic music is our oyster.

EDM MANIAC: What do you look up to? Where do you get your inspiration from?

BLAUS: Our inspiration is in part the same as our goal; to make music that heals. We hope that our music will be able to reach those in need of releasing the mundane anxieties of daily life. Music therapy has amazing effects on the human brain. We are here for the music and for the people and there is really no greater feeling in the world than being able to create and perform knowing that someone’s depressing or stressed out mood has been uplifted to an energetic yet relaxed persona. We look up to those artists that have helped us with exactly that, people like Kaskade, Booka Shade, Trentemöller, Amtrak, Claude Vonstroke, too many greats to list. We not only appreciate these artists, we study them and hope to emulate the beauty they have added to the world.

EDM MANIAC: What’s it like winning Insomniac’s discovery project? Could you tell us a little bit about your entry and what inspired you to even enter?

BLAUS: Basically winning was the most indescribably uplifting feeling. It was exciting, overwhelming, frightening but—in all honesty—it felt so right.  What’s really crazy is that our song that won, I Saw You, was actually a brand new song that we had just finished writing about a day before we entered. We didn’t submit our entry till the last night of the competition at around 11:30 PM. My girlfriend threw the idea at us but we never thought that Booty House would ever be something that the Discovery Project was looking for. Luckily we were wrong. Winning the discovery project was actually more of a shock than anything. I remember when we got the personal phone call from Charlie at Insomniac and I didn’t believe him at first at all. I used foul language believing it was a prank call. But then it all really clicked that we really had won and that they had heard and liked the sounds of BLAUS and Booty House! With all the ‘candy rave’ music that is out there today we were worried our vision would be overlooked.

EDM MANIAC: How are you preparing for your set at White Wonderland?

BLAUS: When we found out we won the discovery project, we actually had a show that night.  So immediately Zach and I changed our set for that night to something similar to what we’ll be playing at White Wonderland. We’ve been writing a couple new songs, polishing our mixing and production and have a couple more shows planned before Wonderland to practice at. Also, the third entity (and secret weapon) of BLAUS, Shawheen Khorshidian is our Art Director. He is our dearest and closest friend (basically a brother) and has been creating a ton of new graphic designs, brand coordinating, and on-stage styling looks. He will be visually documenting the whole trip from the plane to Wonderland and back. So along with prepping for this set we are really preparing for the rest of our career in the music industry.

EDM MANIAC: Are you at all nervous?

BLAUS: Yes and no.  Zach and I don’t really get nervous before playing but rather overwhelmingly excited. It’s the one time in our lives we can do exactly what we feel we were born to do and the one thing we love the most in this life.  So thinking about playing at the Anaheim Convention Center in front of so many people and industry folk, it’s almost impossible not to be nervous, but it’s not that we “can’t wait” because that implies impatience; its more like we anxiously anticipate and look forward to it. Nervous or not, the moment we’re on that stage, it all goes away and we find ourselves in the bliss of doing what we love.

EDM MANIAC: When you guys aren’t creating music what are you doing?

BLAUS: Well funny enough, I (Nathan) actually just finished Nursing School at the University of San Francisco and have been a full time student for about the last 5 and a half years. So when I wasn’t producing music or playing live, I was studying about the harmful side effects of wrongly managed diabetes. Zach works as a barista at a local Starbucks and spends most of his time there or skateboarding.  But when we have nothing better to do, we find ourselves either fighting with one another, hanging with our girlfriends, discussing new branding options with Shawheen, going to shows and dancing to our favorite artists, or drinking brews at any near by pub. We live a happy life and it’s only getting better and better.

EDM MANIAC: What can we expect from your set at White Wonderland?

BLAUS: Well we don’t want to reveal too much, but if you could imagine the booty-bumping 808’s of E40 with the soft comfort of Booka Shade, then that’s what you’re going to get. We like to sweat, and we like our fans to sweat, so Booty House is what you get. We are mostly excited to play our original music mixed with some of our most favorite artists.  We also like to encourage people to be dancing with someone/anyone/everyone else. Booty House is a movement, both figuratively and literally!

Visit www.blausbeats.com for more information about BLAUS, and be sure to catch them at White Wonderland on December 31st from 7-730PM.