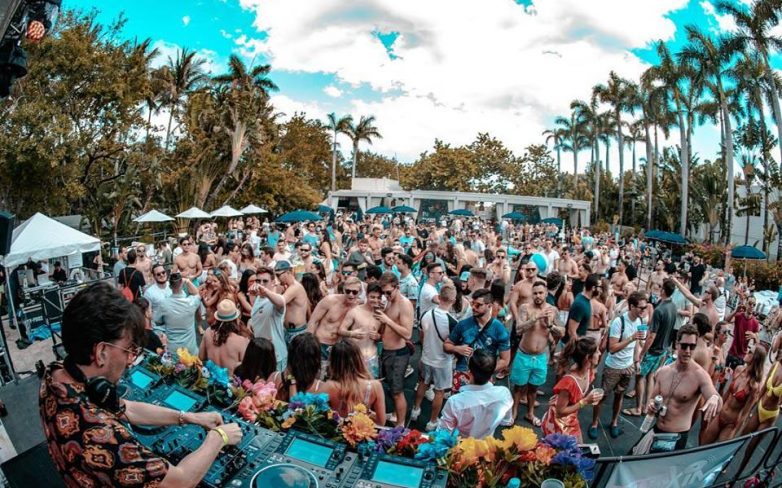 Each year, hundreds of thousands of electronic music fans, artists, producers, and industry heads gather in Downtown Miami and South Beach for Miami Music Week (MMW). Along with that comes the legendary pool parties followed by Ultra Music Festival as the sunny metropolis of Miami transforms into an electronic music paradise for an entire week. With such an array of events to choose from, let us be your guide to the best pool parties to cool down in the Miami heat.

To kick off Winter Music Conference (WMC) and Miami Music Week (MMW), Kimpton EPIC Hotel will be hosting the official Opening Party at their beautiful pool deck overlooking the Miami skyline from the sixteenth floor. EPIC is well-known for their annual series of pool parties that run through the week, bringing out the best in electronic music. For the opening party, EPIC is collaborating with the renowned Electric Ibiza to bring you Kings of House featuring an exclusive performance with Louie Vega b2b David Morales for a six-hour set. It will certainly be going up on a Tuesday, running through the evening from 5PM to 11PM. For tickets, head here.

The Axtone Pool Party returns to Miami Music Week for another year of partying underneath the Miami sun, but this time at Shore Club in the beautiful South Beach. Axtone is the record label helmed by Axwell of the world-renowned trio Swedish House Mafia, which means Axwell will be taking the stage alongside others from the label for this poolside soiree. Conveniently located within walking distance of Winter Music Conference, this this event runs from 1PM to 11PM at this gorgeous beachfront location. For tickets, head here.

The beloved mask-wearing duo known to the world only as Claptone will be heading to the beaches of Miami to host a pool party at the SLS South Beach and famed Hyde Beach for Claptone Presents The Masquerade. Along with a performance by Claptone themselves, several special guests will be taking the stage including MK, Meduza, Tube & Berger, and Illyus & Barrientos. The event is appropriately named after their first album and has continued as a theme at events around the world including Tomorrowland, Hi Ibiza, Amsterdam Dance Event, and many others. Behind their golden masks, Claptone will surely bring on the dance vibes to this beach club. For tickets, head here.

The National Hotel is another South Beach venue opening its doors to the best pool party series during Miami Music Week. To kick off their pool party series, Descend Records is partnering with Seven Lines Group for the Descend Pool Party. Located near other Miami Music Week events, National Hotel is a historic luxury resort in the art-deco district of South Beach with an oceanfront view from the pool. For the Descend Pool Party, several artists will be taking the stage including Alx, Anfisa Letyago, Julian Jeweil, Oscar L, Popof, Reinier Zonneveld (Live), Bryan Estefani, and Gioh Cecato. For tickets, head here.

As the largest publication for electronic music in the world, the DJ Mag Pool Party at the Kimpton Surfcomber Hotel is a must. From the people that created the highly-anticipated yearly Top 100 DJ List, you can expect the very best in electronic music to be taking the stages at this event. So far, confirmed artists include Cassy, Duck Sauce, Heidi Lawden, J. Worra, La Fleur, Meduza, Seth Troxler, and several more surprise guests. For tickets, head here.

The beloved mouse-helmet wearing producer Deadmau5 will be returning to Miami Music Week for several events, including the annual Mau5 Pool Party which will be held at the Delano Beach Club this year. Specializing in progressive and electro house, Deadmau5 and his label Mau5trap will be showcasing several artists at this beachside party. Artists include BSOD (Deadmau5 and Steve Duda), I_O, No Mana, Blackgummy, Moguai, Sian, Speaker Honey, Kindrid, and C.H.A.Y. For tickets, head here.

In a collaboration with Spinnin’ Records, tropical house producer Sam Feldt will be hosting a poolside event at the Nautilus Hotel in the beautiful South Beach area for Sam Feldt Presents Heartfeldt, his weekly radio program. The energetic melodies associated with deep house and tropical house make this a perfect event for dancing under the sun. Artists joining Sam Feldt (who will be spinning live) includes Bakermat, B. Jones, Cheat Codes, CID, EDX, Gattuso, Goldfish, Ofenbach, Vize, and several other surprise guests. For tickets, head here.

The cake-throwing party legend Steve Aoki and his label Dim Mak will be taking over the pool of Nautilus Hotel for what is guaranteed to be an epic event, especially considering it is almost sold out! Overlooking the beach of this oceanside hotel, the location is within walking distance of Winter Music Conference. Steve Aoki and surprise guests will be taking the stage, offering up energetic dance beats and party vibes from 12PM to 11PM in this day-to-night event. For tickets, head here.Thursday March 19th: Church Of Galantis Pool Party

Hot off the official release of their hit new album ‘Church’ this last weekend at Shrine Auditorium, Galantis is taking over the stage for their Miami debut of Church of Galantis. The Swedish duo along with Alok and several surprise guests will be performing at Delano Beach Club on the sandy poolside deck in South Beach. In a collaboration with SBE and Diskolab, this event will be one for the books as Galantis showcases their past hit tracks and new album release. For tickets, head here.

Heldeep Records, the label founded by electronic music genius Oliver Heldens, will be hosting a legendary pool party at Shore Club in the gorgeous South Beach area. The event will feature performances by Oliver Heldens, Ares Carter, Autograf, Bakermat, CID, Firebeatz, Gawp, and Glass Petals. Additionally, several special mystery guests along with exclusive surprise b2b sets will be showcased at this event. Located in the vicinity of the last day of Winter Music Conference, this poolside event makes for a perfect break to dance under the Miami sun. For tickets, head here.

Mood Records will be collaborating with popular Miami nightclub Club Space and the legendary Insomniac Events to present In The Mood at the oceanfront Shelbourne Hotel in the South Beach neighborhood of Miami. Mood Records is the label founded by female powerhouse Nicole Moudaber, who is a DJ, producer, and electronic event curator that has collaborated on major events around the world. For this round, In The Mood will be featuring heavy hitters and surprise guests that take the stage for this day-to-night event. For tickets, head here.

Marc Kinchen, better known by his stage name MK, is a veteran on the electronic music scene and has been producing hits since the 90’s due to his talent and creativity. For Miami Music Week, MK and his label Area 10 will be back for an incredible showcase after a sold-out event last year. Taking over the pool at the oceanfront National Hotel in South Beach, MK will take the stage along with Gorgon City, Lee Foss, Anthony Attalla, Dom Dolla, Carabetta & Doons, KC Lights, Detlef, Franky Rizardo, Nightlapse, Weiss, and surprise guests. For tickets, head here.

Brooklyn’s finest deep tech producers Bedouin will be heading to luxury beachfront resort 1 Hotel in South Beach for the launch of their label Human By Default. Together with Insomniac and Club Space, this event is a huge milestone for this duo comprised of Tamer Malki and Rami Abousabe. Bedouin will be performing alongside several special surprise guests for this day-to-night event. Nestled against the sand, the event takes place at the fame Beach Club at 1 Hotel for an afternoon of dancing in the sand. For tickets, head here.