The Second Wave also includes a number of acts that will perform at North Coast for the first time ever, such as Boogie T, house producer, and vocalist Channel Tres, electro-pop duo Eli & Fur, dubstep maestro Rusko, deep-house hero Yotto, and melodic dance producer William Black. Other North Coast veterans who will once again take the stage include MitiS, Moksi, and Wooli. North Coast will also welcome a number of additional support acts to the festival.

Following their successful relocation to the recently renovated SeatGeek Stadium Campus in 2021, North Coast expanded its experiential art installation programming.  They’ll be showcasing massive interactive experiences such as The Void, Into the Fog, Rainbow Hammock Lounge, and The Chill Dome for the first time ever in Chicago. The 2022 edition will invite “Coasties” to explore never-before-seen art pieces, live painting, and tons of food and beverage vendors too.

Both GA and VIP 3-Day festival passes are on sale now, including Payment Plan options.

Single-day tickets will go on sale this Friday, March 18 at noon CST. 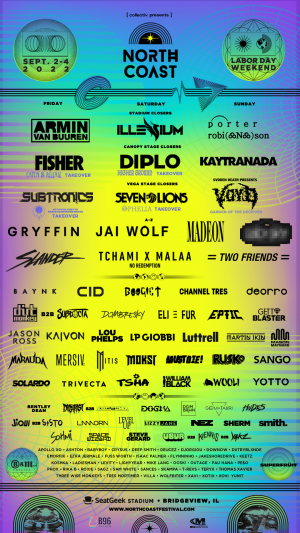 Insomniac Is Building A Metaverse World For Virtual Concerts Via The Video Game Company, Unity