With festival season turning into lockdown season, major festivals are now hosting virtual raves and festivals as the counterpart to the regularly scheduled event dates that have been postponed due to the coronavirus pandemic. Last weekend, Middlelands hosted a Virtual Rave-a-Thon to provide fans with a full festival experience brought directly to their living rooms. During the live stream, Insomniac CEO Pasquale Rotella officially announced the Electric Daisy Carnival (EDC) Las Vegas three-day Rave-a-thon during what would have been EDC weekend this May 15th to 17th, 2020.

Earlier this month, Insomniac confirmed that the annual springtime festival would postponed to the new dates of October 2nd to 4th, 2020. EDC was set to celebrate their ten-year anniversary at the Las Vegas location after their move from Los Angeles in 2010. Along with the anniversary came multiple surprises this year, which are still set to take place even with the postponed date. This includes the expansion to utilize the entire Las Vegas Motor Speedway for the first time.

While fans were hoping the festival would take place next month, the decision to cancel the festival makes sense. In a move to provide fans with an exciting weekend regardless, the EDC Las Vegas Rave-a-thon will be Insomniac’s best live stream yet. This follows the wildly popular Nocturnal Wonderland, Countdown NYE, HARD Summer, and Beyond Wonderland Rave-a-thons (which garnered over 3.5 million views). The stream will feature multiple stages, multiple channels and tons of music. Tune in May 15th to 17th for virtual EDC via Insomniac’s official YouTube or Twitch accounts! 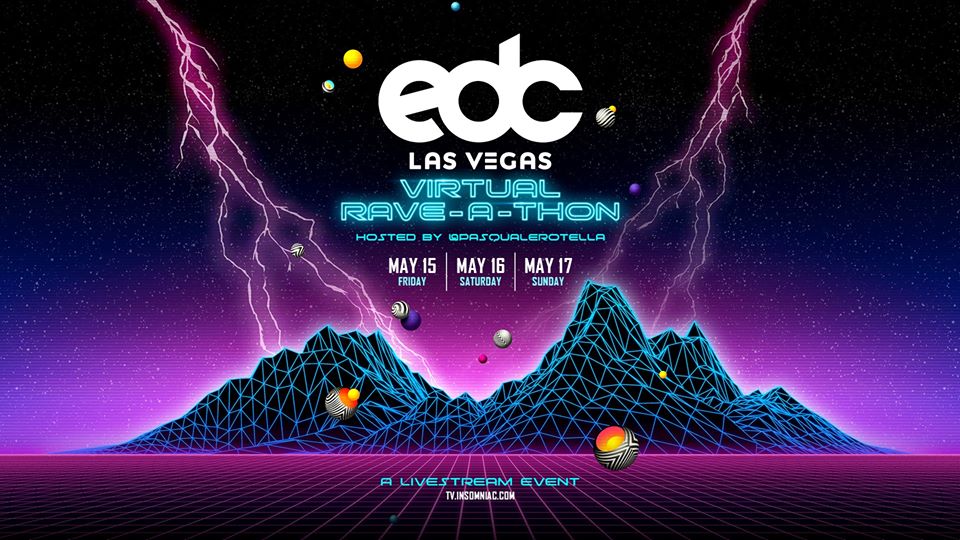 Insomniac Is Taking Streaming To The Next Level, And They're Just Getting Started