When you think of the global music streaming platform that is Soundcloud, you might assume that money would be the least of it’s concerns. However, recent reports prove otherwise that reflect both an increase in revenue and losses. The 2014 financial results for the company show they pulled in more this year with a total revenue of $17.4 million, up from $11.28 million last year. Unfortunately though, Soundcloud also experienced it’s worst financial year yet with $39.1 million in losses, as illustrated in the graph below: 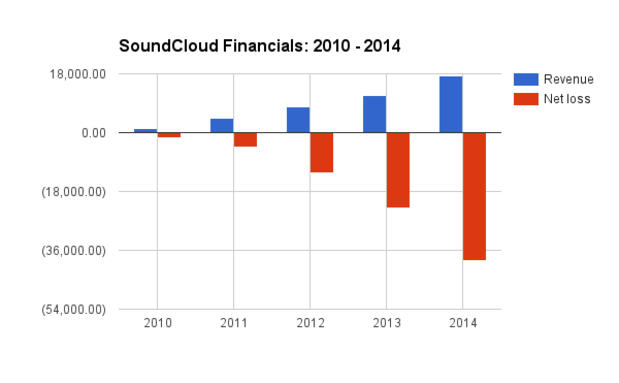 2014 started with good intentions, gradually announcing plans to start paying royalties to artists and right holders as well as suggestions of . But it quickly got muddy as rumors of Twitter acquiring the company were circulating, and as music started to get taken down due to copyright laws. “Countless artists have launched their careers though mash ups, bootlegs, remixes and music sharing. These laws and page take-downs are cutting us down at the knees,” explained Kaskade in an outrage after several of his tracks were removed to accommodate the legal risk. SoundCloud’s movement towards becoming capable of paying artists and labels was its story for 2015, while debates about subscription versus free on-demand streaming came more frequent.

Soundcloud is making significant leeway. Having partnered with Warner Music Group, Universal Music Group, US National Music Publishers Association and indie licensing agency Merlin, it seems most of the music industry is in favor of fueling Soundcloud. “We have very tight controls over how we’re spending, but profitability hasn’t been our primary goal,” Alexander Ljung explained in an interview with Billboard toward the end of 2015. Ljung is Soundcloud’s CEO, who has remained optimistic about the future despite the financial imbalance. “People have alway recognised the massive scale of SoundCloud and the unique amount of creators and creativity,” he said in a recent talk with Music Ally. “Everybody knows that all of the future stars are already on SoundCloud today, and people already know that if you are a star today, you are going to use SoundCloud to create a lot of buzz and promotion around new releases.”

As many of us know, Soundcloud has a huge presence in the online music community. In fact, it’s still one of the largest in the music streaming service industry. In May of 2015, Next Big Sound analytics proved that usage was more alive than ever, with the amount of monthly plays having doubled since the year prior to 4.9 billion streams. So, if Soundcloud can integrate a versatile software for both paying and non-paying users while still showing artists and labels appreciation through royalties, the future is brighter than ever before for the streaming service we all value so much!

7 Ways To Festival On A Budget