The trio posted on their story that due to damage to an integral production piece to their performance, they would have to cancel five more shows.

These dates are Zurich, Krakow, Prague, Cologne, and Munich, all within the month of October.

Swedish House Mafia’s comeback tour has been filled with highs and lows, having canceled a large portion of their US tour shows and an even larger portion of their European tour dates; there have been around seven cancellations in the US and about ten in Europe so far. The estimated cancellation rate of the whole Paradise Again tour is now around 40%.

Angello, Axwell, and Ingrosso, the three members of the supergroup, also confirmed that all dates from October 29 and beyond will continue as scheduled. 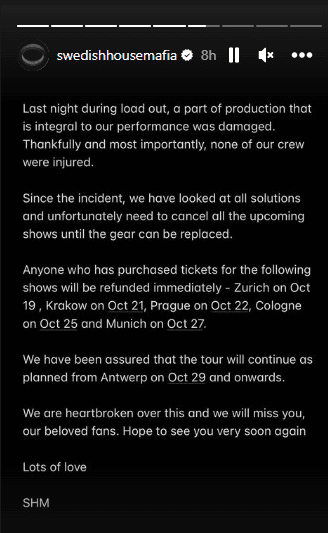