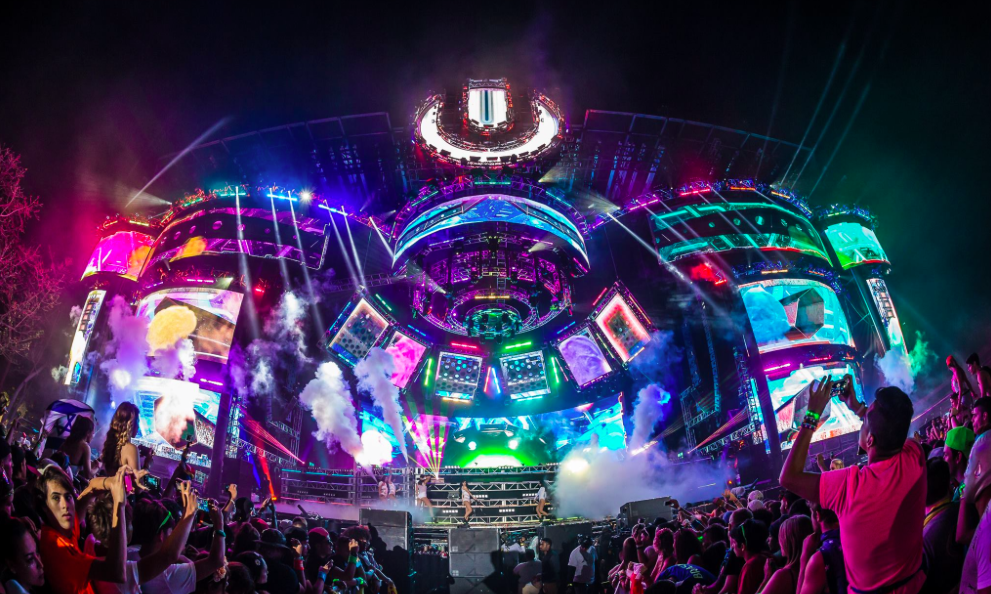 Its the end of the year. You knew this was coming. Here are my favorite 25 tracks of the year, in no particular order.

All 25 of these records have either had a significant effect on the scene, or are just freakin’ amazing. Considering this was one of the best years in history for electronic music, narrowing it down to 25 was hard. Plus a higher number of tracks just seemed excessive at that point.

Also, before you light up the comments section about how some of these aren’t “EDM”, just know that I define that term in the most literal way possible: electronic. dance. music.

I can proudly say I was a Major Lazer fan long before “Lean On” came out, but when the newest album, ‘Peace Is This The Mission’, was released I was a little underwhelmed. Not only were there a disappointing number of tracks (Only 9 vs. 14 on the second and 13 on the first), but there was a general lack of the ethnic flavor that really defined Major Lazer’s dancehall sound. However, a few weeks ago ‘Peace Is The Mission: Extended’ came out and it’s clear the 5 new tracks were intended for that purpose exactly. “Thunder and Lighting” is the best of the five. With the help of Gents and Jawns, Major Lazer takes an old school dub song and turns into four distinct bass drops, each one better than the last.

Seeing Claude Vonstroke’s real name on the Dirtybird Campout lineup was a surprise to say the least. Considering he’d be bringing his classic house flavor in full force as Claude, I figured it wouldn’t be just another house set, but I still had no idea what to expect. Well what happened was Barclay spun a wildly eclectic set of bass music and hip hop. The set was not recorded (as expected) but Barclay’s new EP with EPROM is a nice sneak peak. Prepare for some dope beats.

The Chemical Brothers new album ‘Born In The Echoes’ delivered in traditional Chemical Brothers fashion: exquisitely. As one of the most legendary electronic acts of all time, there were bound to be remixes from some pretty notable artists as well. Some of those remixers include Carl Craid and Claude Vonstroke, but the best of which was Skream’s remix of one of the album’s lead singles, “Sometimes I Feel So Deserted”. Skream, in traditional Skream fashion, played this track live months before its release and it became one of his most in demand track requests. This progressive techno journey gives credit to the original while displaying Skream’s very original interpretation as well. I thought this was a good way to give a shoutout to both the Chem. Bros and Skream without taking up two places on the list.

The first release on his new label, Basement Leak, Shiba San took his deep flavor and cranked it up to 11 on this one. Complete with a brooding voice sample, this beat and bass line combo is utterly infectious.

Dubstep’s not dead everyone. Well at least two of the most legendary producers in the UK dub scene don’t think so.

On Caravan Palace’s last two albums, the electro and swing were completely inseparable. Every tune was full of jazz. On the most recent album however, this team of French men and women embraced the renaissance of electronic music by stepping away from the Jazz a little bit. “Midnight” represent this move with its electro heavy beat pepper with vocal flares and soulful saxophone buildup

If you haven’t heard of Sam Gellaitry you will be hearing a lot more from him soon, and this track is one of the reasons. After it finding its way into the sets of bass heads like G Jones and on the airwaves via the legendary Annie Mac, “Long Distance” has shown the world that this 18 year old kid from Scotland knows all there is to know about hip hop and soul music.

Of all the Dirtybird regulars, J. Phlip has always been the minimalist. While the others are pumping you up with booty-shakin’ bass, J will keep you guessing with her deep cuts and languid transitions. Now with the help of fellow U.K. tech knight, Huxley, the two of them have come up with a pair of tracks that are so heavy you’re body can’t help but move. Their joint EP of the same name is also the first release of Huxley’s new label, No Idea’s Original.

The king of the funky bass is back people.

The only thing missing from Zed’s Dead most recent ‘Somewhere Else’ EP was a raw dubstep track. Hadouken VIP is that track.

Most of the time in house music, the buildup simply exists to fill up the space between drops. It’s the halftime show at the super bowl, it’s cool and you don’t mind that it’s there, but in reality, you just want to get back to game. When Four Tet produces a track though, it’s the most important part of the song. Clocking in at just over 10 minutes, the epic buildup of his “Opus” remix lasts for more than half of the song. I’ve witnessed it live several times and anyone who isn’t familiar with it will probably end up clapping with the furiously arpeggiating beat about two minutes in before their arms get tired.

As two of the most influential figures in electronic music right now, Diplo and Skrillex both have several side ventures. Major Lazer, Dog Blood, their own labels. With all this on their plate I feel like Jack Ü was just a way for the two of them to have some fun making songs together, and with other people. The fact they’re now nominated for several Grammys because of it is just a bonus. “Holla Out” is a track they made with the rising star, Snails, who has developed a sound just as unique as both Skrillex and Diplo. With all three of them working together on this one, the result is a nasty dubstep banger.

Hot Since 82 has always been able find a perfect balance between House and Techno. It’s even better when he gives it away for free.

Nero is a group who has evolved significantly this year. With the release of their second album ‘Between II Worlds’, the electronic power trio adopted a whole new image. They went from producers to arena rockers pretty much overnight, and the primary ingredient in this chemical reaction was Alana Watson. The fact that her face is now front and center on the album cover says it all. On the first album, she was featured on less than half of the songs, and on the second she is featured on all but two. Maybe its because all the songs with her vocals are the hits (“Promises”, “Me and You”, “Must Be The Feeling”). Her ascension was also aided by (insert names here)’s desire to explore a new sound. Their enormous dubstep and electro on the first album put them on the map, but with electronic music being as diverse as it is, it’s no surprise the B2W is as eclectic as it. “Two Minds” represents both Alana’s heavenly vocals and Nero’s adoption of a new style like future bass.

Remember the booty shaking’ bass I was talking about earlier? This is that.

17. Trouble At The Séance – Damian Lazarus & The Ancient Moons

Damian Lazarus has had quite the year. There was an essential mix, a huge series of releases on his own Crosstown Rebels, but most notable of all is his brand new live project: The Ancient Moons. Taking the primal nature of techno to a more worldly place, The Ancient Moons borrows the sounds of African and Middle Eastern folk music and applies them to Damien’s mastery beats. “Trouble At The Séance” displays how perfectly these two elements combine.

As if European Techno couldn’t get any darker, Fur Coat opened up the gates of hell with this one. But not in a fiery “you’re gonna get tortured forever” sort of way. More like your worst fear is the dark and you’re slowly realizing youre never going to see the sun again.

You know how there’s that one song that you hear three times at every festival throughout the whole year. That was this one in 2015, and you know what, I wasn’t bummed about that at all. Nero even played it in their essential mix.

21. Take Me There – Nocturnal Sunshine

Maya Jane Coles showed the world a completely new side this year with her dubstep alias, Nocturnal Sunshine. Although she had put some remixes up on Soundcloud three years ago, the release of her ‘Nocturnal Sunshine LP’ solidified her commitment to this project. Just like her house, Maya’s dubstep is an expression of her hometown of London: all bass and all business

‘Fated’ is Nosaj’s album that makes the most sense and I love it.

Ada Kaleh is one of the most talented producers that nobody’s heard of. Hailing from Romania, I’ve never heard dance music that takes the listener on a journey like this. Considering all the tracks on this self titled LP are in a language that isn’t English, this is the only one that I can moderately translate into “Dissonant Sonata”, and that’s exactly what this 12 minute long techno tapestry is.

Claude hasn’t made a tune with this kind of upbeat Dirtybird funk since “Bird Brain” came out in 2009. Like with almost every other tune he’s ever produced, he provided the vocal sample and a bass line so groovy that I’ve heard all the birds drop it in one of their sets at some point this year.

I have to give this one some credit. A team of rising stars, each with distinct tastes, came together to create one of the most successful songs of all time and released it independently. What is it about “Lean On” that made it such a hit? The simple truth of the hook (“All we need is somebody to lean on”), the effortless melody, or maybe it was a kind of inspiration that could have only occurred at that time among that group of people. Who knows? There really isn’t anything to not like about it. The facts are its the most streamed song of all time and has gone platinum in 11 countries. Another reason I wanted to close the list is to point out once again that this song received no attention from the Grammys at all this year, which makes no sense to me.

As a closing thought, I have found that one of the best ways to find new music is to look up artists you like on Spotify or iTunes or whatever and scroll down to the “related” section. Then do it again. It’s like an endless chain of similar music. So if you weren’t familiar with any of the songs on the list, look them up, and look up what’s related to them. Three searches later you might find your favorite producer of all time.